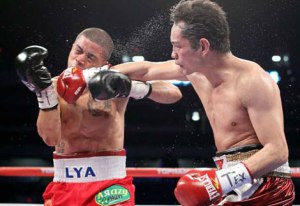 ANOTHER WORLD TITLE. Puerto Rican Wilfredo Vazquez Jr. receives a right jab from Nonito "The Filipino Flash" Donaire in a 12-round fight for the WBO superbantam weight title. Donaire claims the belt. (photo courtesy of thesweetscience.com)

DAVAO CITY, Philippines — “He’s not going to be a Pacquiao, but he’s a Donaire. He did a good job!” one of the announcers said after Nonito Donaire won the superbantam weight title over Puerto Rican Wilfredo Vazquez Jr. at the Alamodome in San Antonio, Texas, USA on February 4. The fight, which had Davaoeños glued to their radio and television sets, was aired live in the Philippines on Sunday, February 5.

Donaire who earned the moniker “The Filipino Flash,” won by split decision earning him his fifth World Boxing Title in fourth weight division. This was his first fight at 122-pound weight class.

A boxing bout not easy with a big and tough opponent, Donaire hurt his left hand which he showed before the decision of the fight was announced. He has now a record of 28 wins and one loss with 18 knockouts.

Boxing, a Filipino favorite pastime, is also a way out for other struggling Filipinos, according to activist and boxing fan Joel Virador.

While Donaire’s win calls for a celebration, Virador said if there are only decent jobs and livelihood for the people, “No boxer will be like Maquinto.”

Karlo Maquinto, 21, is a Super flyweight boxer from a peasant family in Iloilo. He succumbed to death after suffering a five-day comatose last February 3.

He collapsed in the ring right after the decision of his fight was read in January 28 at Caloocan in Luzon. He suffered massive subdural hematoma caused by the blows he received during the exhausting eight-round fight. He had a record of six wins, zero loss and one draw with four knockouts in his short boxing career. (Marilou Aguirre-Tuburan/davaotoday.com)