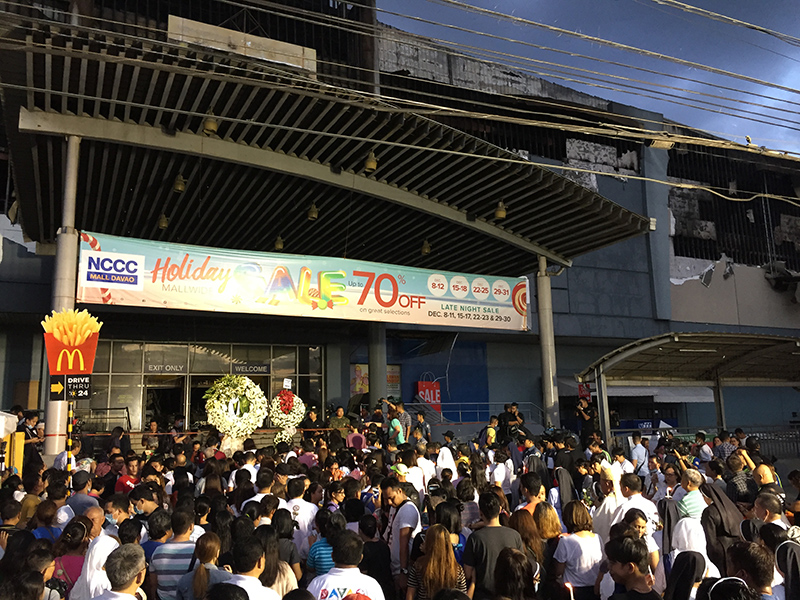 GRIEF. Families and colleagues grieve as authorities here confirm that they found dozens of bodies inside NCCC Mall which was hit by fire on December 23, 2017. (Mick Basa / davaotoday.com)

DAVAO CITY, Philippines – The remaining 36 bodies that were missing for days inside a mall blazed by fire have been found, the commanding officer of firefighters confirmed on Monday, December 25.

“There were around 36,” he added, as families started to burst into tears.

Mayor Sara Duterte-Carpio had earlier told these families at Southern Philippines Medical Center on Christmas Eve that they were expecting the 36 bodies of those trapped inside the mall.

Similar to what her father President Rodrigo Duterte revealed to them, there were zero chances of their survival.

Emotions ran high on the afternoon of December 25, with families also joined by hundreds of people, among them were colleagues of these victims.

Davao Archbishop Romulo Valles, who presided the mass, said “what words can I craft to the grieving families who lost their loved ones to the terrible fire. I must be honest I cannot say anything.”

As he addressed the families, Kwan Tiu apologized and said that despite all their efforts in rescuing those trapped inside, “I failed to direct (in giving) them orders to penetrate the building.”

The plume of dark smoke and heat was a challenge among firefighters, he said. “The 500-700 degree Celsius (heat) was enough to melt our gears, our masks.”

The discovery of 36 bodies came after one body was found on December 24. This was also confirmed by Mayor Duterte-Carpio.

“We have recovered the 36 bodies,” she said.

Fire broke out in the third level of the mall at 9:30 on Saturday, December 23. Firefighters dashed into the scene, and eventually sought help from neighboring towns as the fire eventually turned out to be difficult to contain. (davaotoday.com)