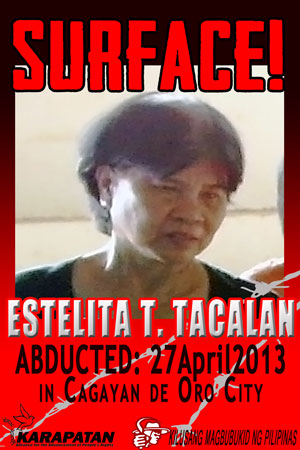 DAVAO CITY, Philippines – Despite the number of years after retiring from service and now hiding as a fugitive, the marks of retired General Jovito Palparan, that is, enforced disappearance and extrajudicial killing as rights activists have been claiming, continue to linger.

The recent victim is 60-year old Estelita Tacalan or Nanay Neneng, a community organizer and health worker under the peasant group Kilusang Magbubukid ng Pilipinas (KMP) and Anakpawis Party-list in Northern Mindanao.  Tacalan, a widow, was left with three children.

According to Father Christopher Ablon, secretary general of rights group Karapatan in Northern Mindanao, Tacalan was abducted by suspected state agents last April 27 at around 9 AM while on her way to Misamis Oriental East.

She was supposed to meet with colleagues to plan for the activities related to Labor Day and election, after leaving the headquarters of Makabayan, a coalition of progressive party-lists, in Camaman-an village, Cagayan de Oro City.  However, by 6 PM, her mobile phones were already out of coverage, causing her colleagues to worry.

The following days, her relatives were contacted and communities and areas where she could possibly be staying were checked.  But not a trace of her could be found.

The group noted that when Palparan was assigned in Central Luzon, Visaya was the commanding general of the 69th Infantry Battalion, the military unit which figured in the massacre of farmworkers in the Cojuangco-owned Hacienda Luisita in November 2004.  It was also the same unit linked to the abduction and torture of farmers Raymond and Reynaldo Manalo in February 2006.

Visaya was also deployed to the Civil Military Operations Battalion in the communities of Metro Manila from February to September 2007 when, Karapatan said, “numerous cases of threats, harassment and intimidation occurred.”

And now the state agents suspected of abducting Tacalan are under the area of responsibility of Visaya.

Karapatan’s Ablon noted that few months before Tacalan’s disappearance, a suspected intelligence asset was observed asking questions on her whereabouts.

He condemned the alleged abduction of Tacalan, saying the “terrifying experience” of the past anti-insurgency campaign, now called Oplan Bayanihan, “must not be resurrected under his command.”

Visaya reportedly vowed to come up with a “proper approach” to weaken the NPA — within two months from his deployment — under his area of jurisdiction which covers the regions of Northern Mindanao and Caraga.  His statement came after the armed confrontation between the NPAs and bodyguards of Gingoog City mayor, which wounded the Guingona matriarch, Ruthie, and killed two others.

Cristina Palabay, secretary general of Karapatan in the National Capital Region, said that while they lamented the incident against Guingona, “the government should not use this as a convenient excuse for the massive deployment of the military troops that will be led by terror dogs like Visaya.”

She added the “installation” of an Oplan Bantay Laya operator like Visaya “to direct the increasing military troops” will only terrorize the people in Mindanao.

Meanwhile, Richard Colao, secretary general of KMP in Northern Mindanao, said Tacalan has been a long-time member of KMP who actively engaged in organizing farming communities in the rural areas.  She also campaigned for genuine agrarian reform, human rights and social justice.

He added that Tacalan’s work in their organization include “protesting against abuses of despotic landlord and lobbying peasant economic and political demands to local government units.”

“Her disappearance is due to her staunch opposition to the anti-peasant policies of President Aquino and of the cruel and inhuman conditions of the farmers in the grassroots,” Colao said.

Following Tacalan’s case, Colao worries for the imminent attacks against peasants.  He said in Misamis Oriental where the KMP has been actively helping poor farmers in cases of abuses, their volunteers and members “have experienced an increase in the number of tailings and surveillance operations.”

Six years ago, three KMP members were killed in the region, under the Oplan Bayanihan of former President Gloria Arroyo.  They were Dalmacio Gandinao, Siche Gandinao and Gerry Ladica.

Colao has appealed to government officials and church leaders, among others, to help them in calling to surface Tacalan.  “We call on the family, friends and the organized farmers whom Estelita had lived with, not to be cowed by this desperate attempt to crush our ranks and our just cause,” he said.  (Marilou Aguirre-Tuburan/davaotoday.com)