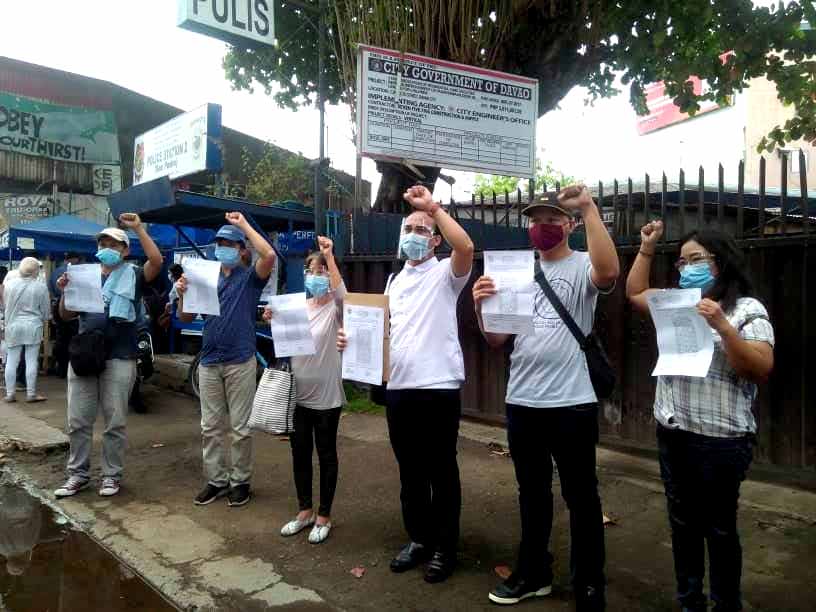 DAVAO CITY, Philippines – Leaders of progressive groups filed complaints to the police and to the Commission on Human Rights over the spread of posters tagging them as “terrorist recruiters.”

Led by the human rights group, Karapatan, the group trooped to the Davao City Police Office in San Pedro Police Station on Monday morning, asking for the police to investigate the incident.

The posters bear faces and names of progressive leaders, including Carlo Olalo, Romelito Pablo and PJ Dizon of labor center Kilusang Mayo Uno-Southern Mindanao; Cora Espinoza, Gabriela Southern Mindanao Vice-Chairperson and a former commissioner of the Philippine Commission on Women and May Ann Sapar of Gabriela.

“If the PNP is truly not involved on the smear-campaign against us, we want them to take action and investigate the recent attack against us,” said Apiag.

The group also filed a separate complaint to the Commission on Human Rights later that day, asking the office for an “urgent investigation” on the matter.

Apiag raised concern in a statement how this terror-tagging of progressive leaders is emboldened with the passing of the Anti-Terror Law. Despite claims that freedom of expression will be protected, the terror-tagging sends a chilling effect.

“What this shows is the clear purpose of the law, and that is to silence critics and dissenters, and even citizens who want to raise their valid complaints to the government, but we are not backing off,” Apiag said.

Dizon from KMU pinpoints the National Task Force to End Local Communist and Armed Conflict (NTF-ELCAC) as behind this spread of disinformation to intimidate the public and silence critics.

“There is no other group who is capable of doing such cheap action against us but the NTF-ELCAC and their local counterparts,” said Dizon, who has experienced being red-tagged while leading the union strike against the banana multinational company Sumifru.

Espinosa, vice chair of Gabriela Southern Mindanao and a former Philippine Commissioner for Women, said the spread of such posters and disinformation in the city puts progressive leaders like her in imminent danger.

“I am really concern about my safety as I am old and also the safety of my family and colleagues. You know, blind followers can take the accusations seriously and God forbid it can cause our lives,” she said. (davaotoday.com)