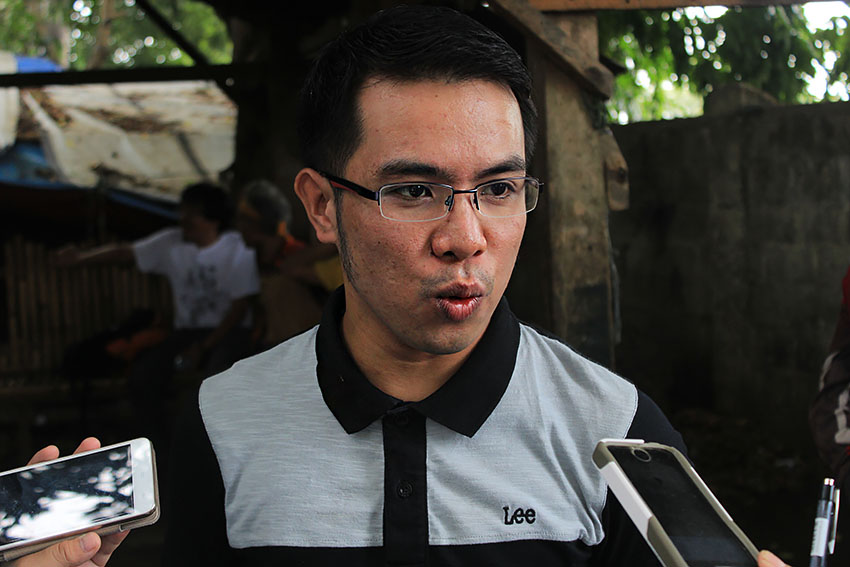 SCHOOL DIRECTOR. Salugpongan Ta’Tanu Igkanugon Community Learning Center Incorporated Executive Director Ronnie Garcia decries the threats he got from an alleged army intelligence agent. He said the school and their teachers have been tagged as an NPA school even before he formally started teaching in 2011. (Paulo C. Rizal/davaotoday.com)

DAVAO CITY— A Lumad school administrator accuse the Army of sending intelligence agents to harass him by “visiting” him and his family.

Ronnie Garcia, executive director of the Salugpungan Ta Tanu Igkanugon Community Learning Center (STTICLC) said they saw suspicious men in the Davao Regional Hospital in Barangay Apokon, Tagum City where they were attending to his sick grandfather morning of July 24.

Garcia said the men asked his family if he is their relative. “Even while we were eating, they were around. But what made me realized that the threat was real is when we saw one of them carry a firearm tucked in the garter of his shorts,” Garcia said in a press conference on Thursday at the United Church of Christ in the Philippines Haran compound in Davao City.

He said a certain Mario Claveria, who identified himself as intelligence agent of the military, wanted to pay him a visit in their office.

“He wants to visit our office in Salugpungan. He also said he wants to pay a surprise visit to where I was staying,” Garcia told the media.

“He really made an effort to talk to my parents,” he said. The 28-year old school director started teaching in Salugpungan Ta Tanu Igkanugon Learning Center campus in Talaingod, Davao del Norte in 2011.

Garcia, who comes from the Mamanwa tribe in Compostela Valley, is a tribe scholar.

The Salugpungan Learning Center has been tagged as owned by the New People’s Army.

Garcia said this is the reason why the harassment he experienced recently is “not an isolated case”, but a systematic attack to threaten him.

“The threats against our schools started in 2010 when the military were encamped in the school’s vicinity in Talaingod, Davao del Norte,” he said.

He said there was a point when their school was indiscriminately fired at for “six consecutive days”. “It happened while I was teaching our high school class,” he said.

“The bullets did not hit the roof of the school. But the shots came from the military camp in front of our school, and towards the vicinity of our campus,” he said.

However, Army spokesman Capt. Rhyan Batchar of the 10th Infantry Division said they have not yet received a formal complaint regarding the incident.

“Should he file any formal complaint, we will be ready to assist (him),” Batchar told Davao Today in a text message.

“We shall make formal investigations and welcome any duly instituted investigating authorities to conduct a separate investigation against the violator,” he said.(davaotoday.com)