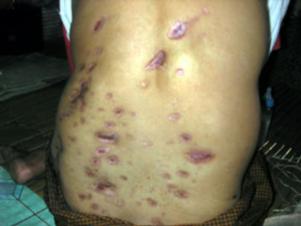 Blasted. Picture shows the back of a Moro woman who was hit by M203 shrapnel during U.S.-Philippine military exercises in Tagbak, Indanan, Sulu, on Sept. 4, 2006. Incidents such as this have prompted progressive organizations to denounce the Balikatan exercises being held this month in Sulu. “There may be more similar incidents that have not been documented yet,” said Carol Araullo, the chairperson of the leftist Bagong Alyansang Makabayan. (Photo courtesy of the Imagination for International Solidarity)