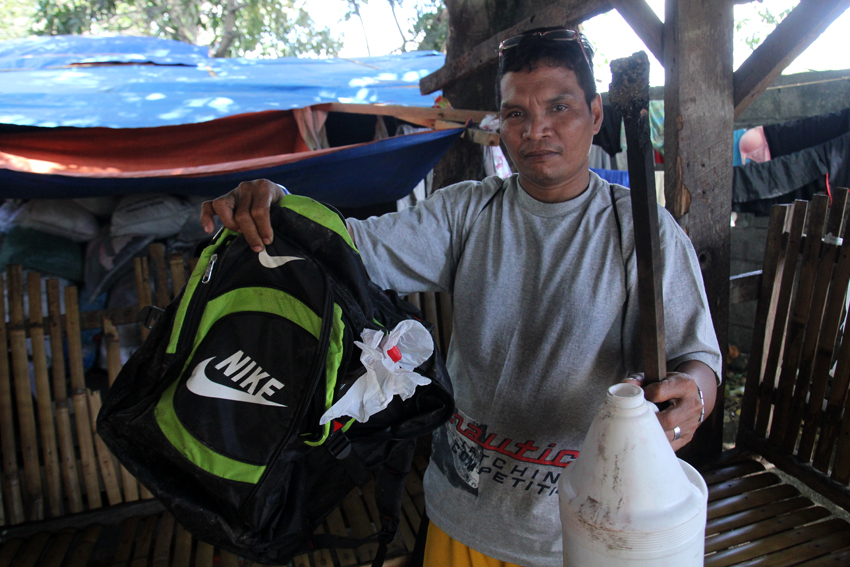 Datu Mintroso Malibato, chairperson of Karadyawan, a lumad organization from Kapalong, Davao del Norte shows a backpack with 1.5 liters of gasoline that was seen at the back of the burned student dormitory. (Photo by Ace Morandante/davaotoday.com)

DAVAO CITY — Davao City Mayor Rodrigo Duterte has told the local police to probe into the fire that broke out at an evacuation camp inside a church-owned property hours after Wednesday midnight, February 24. Peter Laviña, Duterte’s spokesperson, said the mayor wants the police to find evidence whether the incident that injured at least five indigenous peoples, four of them children, was indeed a case of arson.

“Duterte and the peace-loving people of Davao sympathize with the plight of the lumad and join their call for respect for their right to self-determination, right over their ancestral land, cultural integrity, meaningful economic growth, and justice,” Laviña said in a statement.

Results of the investigation by the Bureau of Fire Protection indicated that the fire inside the Haran compound of the United Church of Christ in the Philippines (UCCP) was done deliberately. They said traces of evidence — a backpack with 1.5 liters of gasoline and a torch found in the property — proves that the fire was caused by arson.

Also, another white gallon container was discovered at the Philippine American Veterans Masonic Memorial Park which sits just across the compound.

The Lumads, most of the Manobo ethnic group, have kept coming back to UCCP’s Haran compound due to the unabated military presence in their communities, where government troops engage in combat with the New People’s Army (NPA). As such, they are often caught in between, with the military constantly tagging them as supporters of the Maoist rebels.

Colmenares pointed out the incident’s resemblance to events during Martial Law, where communities of indigenous peoples and peasants were set on fire by secret police forces.

“We cannot let this sort of crimes continue to this day,” Colmenares said.

For his part, Zarate slammed the Aquino regime for its inutility in resolving the systematic killings against the Lumads in Mindanao.

“Clearly, there is a systematic attack to the lumad people, yet the the President has done nothing to stop it,” he said. (davaotoday.com)