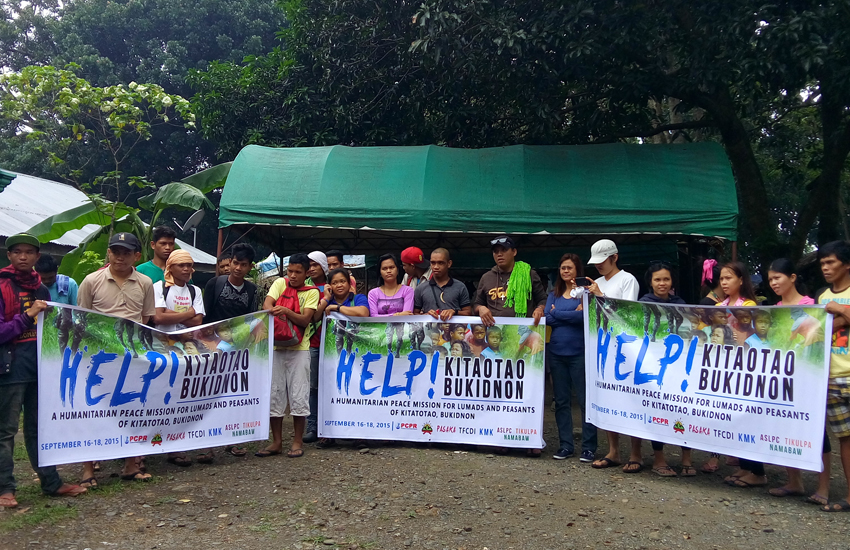 DAVAO CITY – Around 500 individuals joined the delegation from Davao and North Cotabato for a three-day mercy mission in Barangay White Culaman in Kitaotao, Bukidnon to “give assistance to victims of militarization” in the area.

Dubbed as Help! Kitaotao, Bukidnon, the mission which started today will document cases of human rights violations in the area and to give relief assistance for the victims.

The children aged 2, 5 and 7 years old, and a mother who has an 7-month old child were later released.

“The arrested 12 suspected NPA personalities are now in custody of local PNP for further investigation and for filling of cases,” said Capt. Alberto Caber, chief of Public Information Office.

Isidro Indao, spokesperson of KMK, however, said that those who were arrested are their relatives, “and they are all civilians”.

In a press conference held at the United Church of Christ in the Philippines Haran compound on Wednesday morning, Pasaka Secretary General Jong Monzon said that they are holding the mission “to relieve the situation of their fellow lumads in the area.”

He said the Lumads in Kitaotao “need to know that they are not alone in this struggle, in their call to pull out military troops in their community.””We are going to the communities affected to see their situation first hand,” he said. “We will not abandon our fellow lumads,” Monzon added.

The mercy mission is initiated by Promotion of Church People’s Response in Southern Mindanao, Solidarity Action Group for Indigenous Peoples and Peasants (Sagipp), and Pasaka.