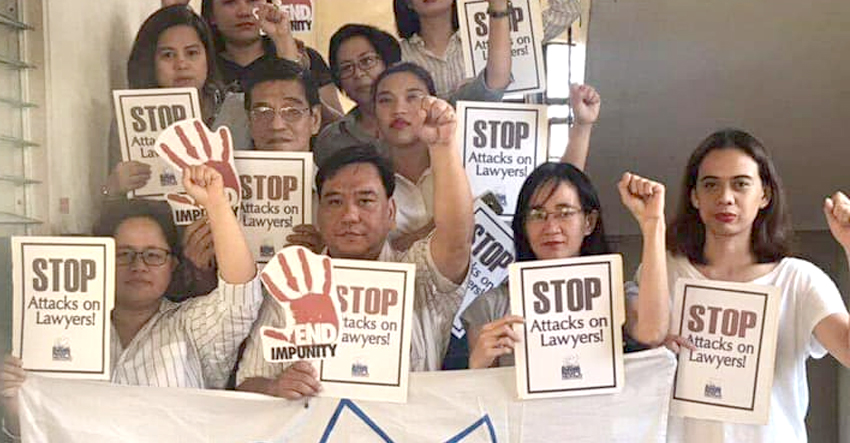 DAVAO CITY, Philippines – Lawyers’ groups expressed alarm on the continuing red-tagging among its ranks, especially those who are deeply involved in human rights advocacy.

“Red-tagging may be viewed as a badge of honor for those who appreciate the value and role of being lawyers for the people. But in the real world out there, it is a stamp mark that one can be fair game for vicious attacks from the intolerant, bigoted and despotic,” National Union of Peoples’ Lawyers (NUPL) president Atty. Edre Olalia said.

Human rights lawyers have been branded as members of the Communist Party of the Philippines (CPP) and its armed wing, the New Peoples’ Army (NPA) over the past two weeks now.

Along with them were the names of church workers, rights advocates, and a journalist labeled as communists.

Olivares made the tagging in one of her columns when the group issued a statement criticizing the Supreme Court’s decision to uphold the third extension of the martial law in Mindanao.

Agcaoili, in a statement on Friday, refuted what the said PNA press release had claimed.

“For the record, I am not a lawyer, never had the ambition to be one despite coming from a family of lawyers.”

Agcaoili clarified that some of NUPL members serve as legal consultants of NDFP Negotiating Panel, as well as legal counsels of detained NDFP consultants and political prisoners, but “such happenstance does not make NUPL a so-called front of the Communist Party nor are the concerned lawyers as members of the Party.”

“But red-tagging has a more sinister objective. It is meant to smear any organization or individual to set them up for the kill, as has been shown in many cases in the past such as those of NDFP consultant Randy Malayao and NUPL lawyer Benjamin Ramos,” Agcaoili warned.

According to NUPL, a total of 36 lawyers, judges, and prosecutors were already killed under the Duterte administration.

It added that many other members of NUPL from different places including parts in Mindanao have been red-tagged, threatened, vilified, and are under surveillance.

Another UPLM member, Atty. Jose Begil Jr., also issued a statement, saying: “It is, indefinite terms, a perverse action when lawyers who provide free legal assistance to those who found themselves in the crosshairs of the draconian rule of President Duterte´s martial law become targets of annihilation. This leads us to recognize that justice and peace in Mindanao under martial law are indeed an oxymoron.”

The group also slammed the hit list circulated in Northern Mindanao with UPLM members among the names of individuals tagged as members of the CPP/NPA.

“It is already a pattern that after a person is vilified or red-tagged, the next chapter will be death or gallows for such person,” Begil explained.

Despite the attacks, NUPL called on for human rights and public interest lawyers to continue to serve “those who have less in life who have even lesser in law.”

“It goes with the territory of siding with the underdog, the powerless and the victims of State negligence and abuses. But these will not slide without any consequences in time. We shall stand our ground,” Olalia emphasized. (davaotoday.com)