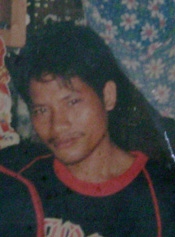 DAVAO CITY (davaotoday.com) — A farmer last seen beaten and forcibly taken allegedly by soldiers on July 4 is missing, according to the human rights group Karapatan.

Witnesses saw Alvin Lopez, 25, a farmer and resident of sitio Maot, Barangay San Jose in Monkayo town of Compostela Valley Province hogtied, and forced into a military vehicle during a military operation. Alvin’s mother, Erlinda, 46, sought Karapatan’s help to locate his son. She filed a complaint Tuesday before the Commission on Human Rights (CHR) in the region against the military’s 26th Infantry Battalion based in the area.

“We are concerned about the situation of Alvin,” said Karapatan secretary-general Kelly Delgado . “He has been missing for days now and the soldiers denied and refused to surface him.”

Earlier, the military engaged a group of NPA guerillas in a firefight in Barangay San Jose in Monkayo that caused residents to evacuate to the neighboring sitio Liwanag. Alvin was left to collect their farm animals while his mother fled with other residents. But Alvin did not arrive at the evacuation site.

Later, witnesses saw Alvin being mauled and shouting for help as he was forcibly dragged and hauled into a military vehicle, which sped away, according to Karapatan.

“We urge the CHR to send their teams in the area to investigate and take legal actions against the military for the illegal arrest, mauling and illegal detention of the victim,” Delgado said. (davaotoday.com)