The tillers of the barren soil: hungry and detained 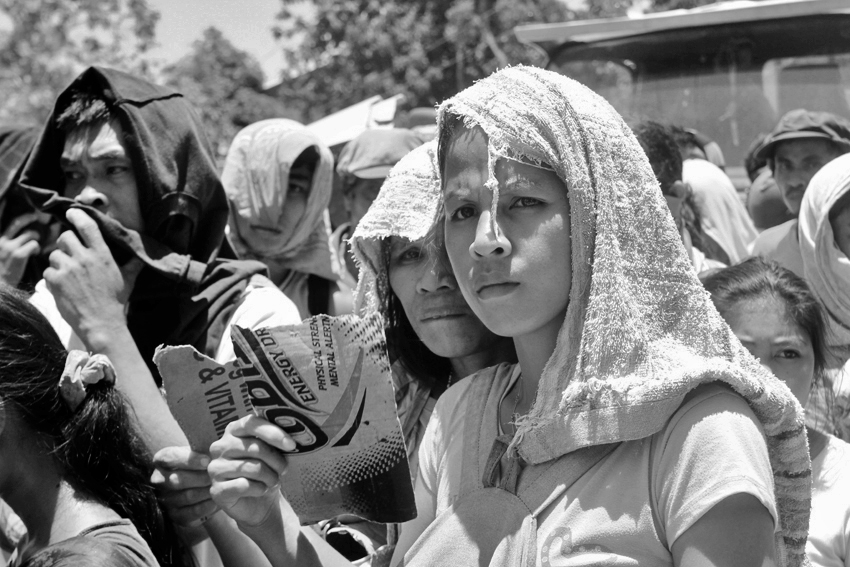 WOMEN FARMERS are among those who barricade the national highway in Kidapawan City on March 31 to demand for government aid. (Ace R. Morandante/davaotoday.com)

KIDAPAWAN CITY –Unlike many Filipino families whose staple food is rice, the household of Adelina Rizardo’s source of nutrition is Cassava. They would crush it until it becomes a powder, and heat it on a frying pan. It’s the food that fuels even her grand children from dusk to dawn – for almost four months now.

“We don’t even have sugar to add to it,” she said.

Rizardo, 52, lives in a village called Noa. Located in Magpet, Cotabato, her land is  known to be one of the major crop-producing parts of the Philippines. However, since December, times have been tough for them.

This drought season, Rizardo could not take anything from the lands they till. If they’re lucky, they make a porridge out of the remaining yields from their corn fields.

With the kind of diet which they have no choice but to subject themselves to, the farmers would experience throbbing headaches, especially for Arlene Candiban, 25, who is six months pregnant with her fourth child.

Candiban earns between P150 to P250 per day, but even less this season as there are barely crops to gather.

“When we go home we can’t even buy milk for our children and it is not enough for our food,” the farmworker said.

“Because of hunger, my milk supply is not sufficient. I don’t even have anything to eat,” she said whilst lying on a mat spread at the grounds of the Kidapawan City Convention Hall.

Usually, when a throbbing headache grips her, she would feel drowsy and forget that she has babies to feed. She has been losing strands of hair. Asked if she has sought for medical help, Arlene said she could not afford to do so.

“I ask myself, how can things like this happen? You have just given birth and you get sick because you don’t have anything to eat,” she said.

During the interview, Arlene was sitting next to her cousin-in-law, Elisa Candiban, who is five months pregnant with her third child. At 22, Elisa struggles to take care of her two other children who will be turning 2 and 4 this year.

The irony of planting rice and corn to supply the country with food is this: Adelina, a farmer, tills a land she does not even own.

“We only rent the land we till. During harvest season we give a sack of our corn produce from every four sacks we harvest to the owner,” she said.

An opportunity came for her to speak out an ordeal her family has been going through for months now. On March 28, she joined other farmers in putting up a barricade along the national highway in Kidapawan City. There, they demanded food from the provincial government.  They were hoping that Governor Emmylou Taliño-Mendoza, the politician they helped her win in the previous elections, would pity their situation and give them aid.

“I need to go there because I need to look food for my family. It was only rice that we asked,” she said.

But the farmers received no food.

Adelina was among those farmers who scampered after authorities fired several shots during the “clearing operation” at the national highway in Quezon Avenue in Kidapawan on April 1.

She was staying far from the police barricade and heard shots around noon time, after they had their lunch.

“When I looked above, where the others were staying, I saw them running towards our direction and I also started to run,” she said.

Adelina hid inside a nipa hut owned by one of the residents in Kidapawan. There, she curled under a bed along other protesters evading the authorities.

“The woman who owns the hut has a small child and even had to muffle the mouth of her baby so the police won’t hear us,” she said. The owner of the house also hid with them under the bed.

But the police found them and brought them to the Kidapawan City Convention Hall.

They were told by a police officer that they will just be fed and would be sent home afterwards. But they took more and more people into the gym, she said.

Adelina, Arlene, and Elisa are among the 29 women detained and charged with direct assault against the police after the violent dispersal. Another detainee, also a woman, was identified as Rolinda Paonil, 34. She is 2 months pregnant.

Adelina, who was one of those who voted Mendoza, pleads to the provincial government: if they could not provide rice, “we will try to look for food by ourselves.”

“I just want to go home because I miss my family,” said Adelina.

Gabriela Women’s Partylist Representative Emmi De Jesus described the government’s response to the demands of the farmers in Cotabato as “excruciatingly slow.”

She said, “it makes you think President Aquino was in coma.”

De Jesus, who was with the National Fact Finding Mission gathered testimonies in Kidapawan, said that Aquino is adding to the list of abuses that the farmers have endured for many months “by concentrating its punitive legal maneuvers on the most vulnerable.”

“If the government has a concept of humanitarian concerns, those who are detained especially the elderly and the pregnant women should be immediately released,” she said. (davaotoday.com)