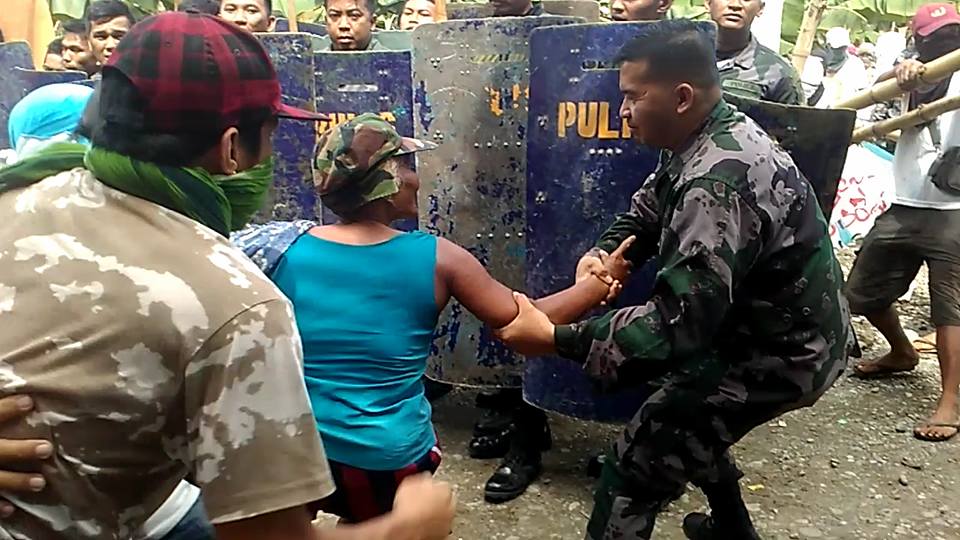 DAVAO CITY, Philippines — Compostela Valley police arrested 13 striking workers of Korean-owned banana plantation Shin Sun Tropical Fruits Corporation, reportedly including one minor on Friday.
Janice Dilag, acting chairperson of Shin sun Workers Union said she witnessed an estimate of 100 military men, 30 police officers and some 20 scabs demolishing their camps in the plantation.
Scabs, also known as strikebreakers, are workers hired by companies during cases of labor strikes to prevent complete paralysis of operations.
Dilag said the soldiers and the police beat up six workers during the scuffle that erupted at around 9:45 am. The other seven were arrested a few minutes later.
Dilag also complained that the scabs sprayed formalin at the protesting workers, preventing the workers from defending themselves.
Dilag said the captured male workers were tied up and were interrogated before they were finally taken to the police station.
Lanie Rose Millalos, 15, was also reportedly among those taken by the authorities to the police station.
Dilag said Millalos was only witnessing the encounter.
Meanwhile, Kilusang Mayo Uno Southern Mindanao Spokesperson Carlo Olalo posted on his Facebook account of a policeman whom he named the Compostela town Chief of Police, Supt. Hugos, forcibly dragging a certain Carmen Atamosa.
“The arrested workers were hogtied and beaten by AFP and PNP. Even when the workers retreated to their houses, the PNP still forcibly entered their premises to arrest the workers,” Olalo said.
SSWU, an affiliate of labor alliance Kilusang Mayo Uno, has been striking for at least three months now, complaining of the illegal dismissal of some 53 workers.
The workers also complained of non-remittance of basic benefits, despite noted deductions in their salaries.
Originally hired through manpower agency ECQ Human Resources Corporation, many of them working for the company for as long as two to seven years.
Read related story: Korean plantation workers stop work, protest vs. illegal dismissal, unfair labor practice
In earlier interviews, Kilusang Mayo Uno Southern Mindanao Region Spokesperson Carlo Olalo revealed that the Department of Labor and Employment, through Regional Director Raymundo Agravante, had already ordered the management of Shinsun to “absorb” the workers.
However, instead of doing as they were told, Olalo said Shin Sun merely told the workers to sign quitclaims and apply to a new manpower agency hired by Shin Sun.
The company has declared losses of about $200,000 or P2 million weekly, and is signalling its intention to close down.
Angel Febre, company president also noted that the strike was illegal, as the Shin sun Workers Union did not lodge a notice of strike before stopping production, which eventually paralyzed operations.
Davao Today has yet to receive the side of the police in this story.
comments powered by Disqus