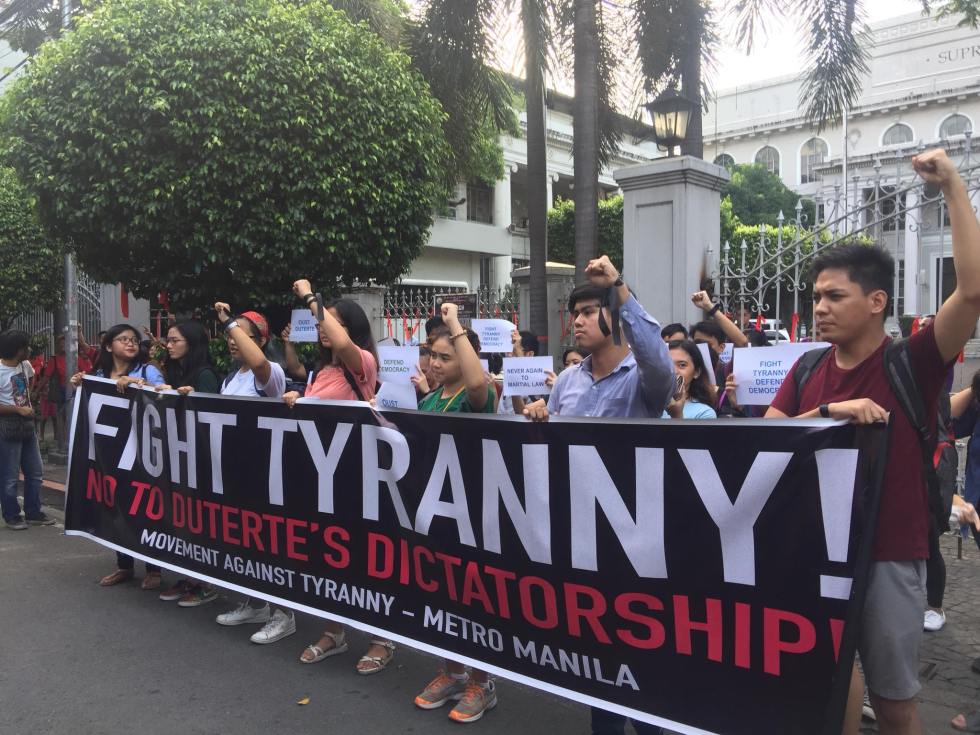 Members of the Youth Movement Against Tyranny – Metro Manila hold an indignation and candle lighting protest in front of the Supreme Court in Manila to denounce the High Court’s decision in favor of the quo warranto petition to expel Chief Justice Maria Lourdes Sereno on Friday, May 11. (Photo courtesy of Kathy Yamzon)

“Wherefore, the Petition for Quo Warranto is granted. Respondent Maria Lourdes P. A. Sereno is disqualified from and is hereby adjudged guilty of unlawfully holding and exercising the office of the Chief Justice,” read the portion of the high court’s decision.

“Accordingly, respondent Maria Lourdes P.A. Sereno is ousted and excluded therefrom…The position of the Chief Justice is declared vacant and the Judicial and Bar Council (JBC) is directed to commence the application and nomination process,” it added.

The decision was immediately executory without the need for further action from the Court, the SC said.

The SC’s decision is the first time that it removed its own chief justice through a petition slammed for violating the impeachment process in accordance to the law. 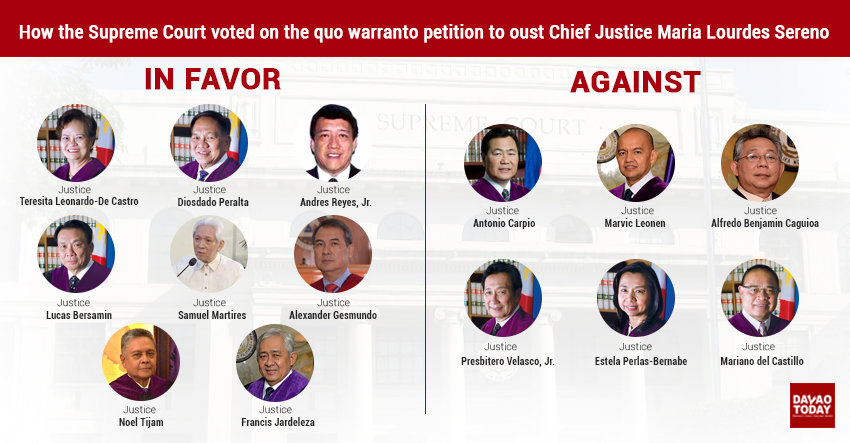 On March 5, the Office of the Solicitor General filed a quo warranto petition to invalidate Sereno’s appointment for allegedly failing to declare in full her statements of assets, liabilities, an net worth (SALN).

The Makabayan bloc had filed petition before the SC to junk the quo warranto proceedings against Sereno citing that it has no legal basis and the chief justice could only be ousted through an impeachment.

House justice panel chairman Reynaldo Umali, earlier said that the Lower House will vote to impeach Sereno if the High Court will reject the quo warranto petition against her.

In a speech after the SC decision, Sereno faced her supporters with high morale citing what transpired during the en banc session that only eight justices should have voted because six others decided to inhibit, saying “kung tutuusin panalo po tayo (in fact, we won).”

(Six out of eight [justices] said that I should not be removed from office. Only two voted for my removal. But because those who should inhibit did not inhibit, it just happened that they ousted me. The six votes in favor of me is a testament that our stand is just.)

The former top magistrate’s camp said they are set to file a motion for reconsideration (MR) against the decision.

Senate President Aquilino “Koko” Pimentel III, despite being a strong ally of the Duterte administration, backed Sereno, saying the SC should review its decision and allow her to file an MR.

“The respondent Chief Justice must be given the opportunity to file a Motion for Reconsideration. God bless our beloved country,” he continued.

House Majority Leader Rodolfo Fariñas has also said that the lower Chamber should wait for the SC’s resolution on the MR, should Sereno’s camp file one.

“Out of respect to a co-equal department that has ruled that it has jurisdiction over the matter of the legality of the appointment of respondent Sereno, the HOR should wait for the resolution of the Motion for Reconsideration, if one is filed,” he said.

Anakpawis R epresentative Ariel Casilao in a statement said that Sereno’s removal ” questions the high court’s integrity and independence from other branches of the government ” .

He added that the removal of the chief justice via quo warranto petition “is sealing the fate of the remaining Supreme Court Justice to the powers-that-be.”

“The ouster of the chief justice is not the clamor from the people,” Casilao added, “It’s the ploy of the elite to further entrench its influence over the Supreme Court. These elite forces have no qualms overstepping the process to get what they want.”

Meanwhile, National Union of People’s Lawyers (NUPL) in a statement slammed the SC decision as “deplorable, contemptuous and a contortion of the Constitution.”

“The Decision granting the Quo Warranto petition does not affect the Chief Justice alone. It primarily affects the entire nation as the Supreme Court literally sprawled the red carpet for dictatorial rule. The present dispensation has practically crippled all the democratic institutions that supposedly ensure checks and balances within the government,” said NUPL.

Bagong Alyansang Makabayan (BAYAN) said the High Court’s decision signals another serious regression in the system of checks and balance in the country,

“It is another act of tyranny that only empowers the Executive, while further undermining whatever is left of the separation of powers of the three co-equal branches of government. Constitutional safeguards have been demolished in favor of those who already wield tremendous power,” the militant group added.

Bayan pointed out that the Executive branch maneuvered to remove the Chief Justice and consolidate its control over all the branches.

“The Legislative embarked on a fishing expedition via impeachment hearings to destroy the reputation of the Chief Justice. The Supreme Court exposed itself as a willing tool in undermining judicial independence because they had an ax to grind against the Chief Justice,” it said.

“All three branches of government have failed the people. All three branches have only exposed the rottenness of the current ruling system. There will be a time for accountability. Right now, the people are justified in their indignation. The people are right to protest the rising tyranny of the Duterte regime,” it added, as the group urged Filipinos to stand together and resist during these “dark times.”

Presidential Spokesperson Harry Roque on Friday called on the public to respect the High Court’s decision to remove its chief justice.

Earlier, President Rodrigo Duterte called on the Lower H ouse to expedite the impeachment of Sereno tagging the chief justice as an enemy he wanted to get rid of while maintaining he was not behind any ouster plot against her.

Sereno and three others dissented from from the majority ruling of the SC to uphold President Duterte’s implementation of Martial Law in Mindanao last year.

She is the second chief justice that has been unseated after Renato Corona was impeached in 2012 over the allegations of betrayal of public trust and culpable violation of the Constitution. (Mara S. Genotiva/davaotoday.com)