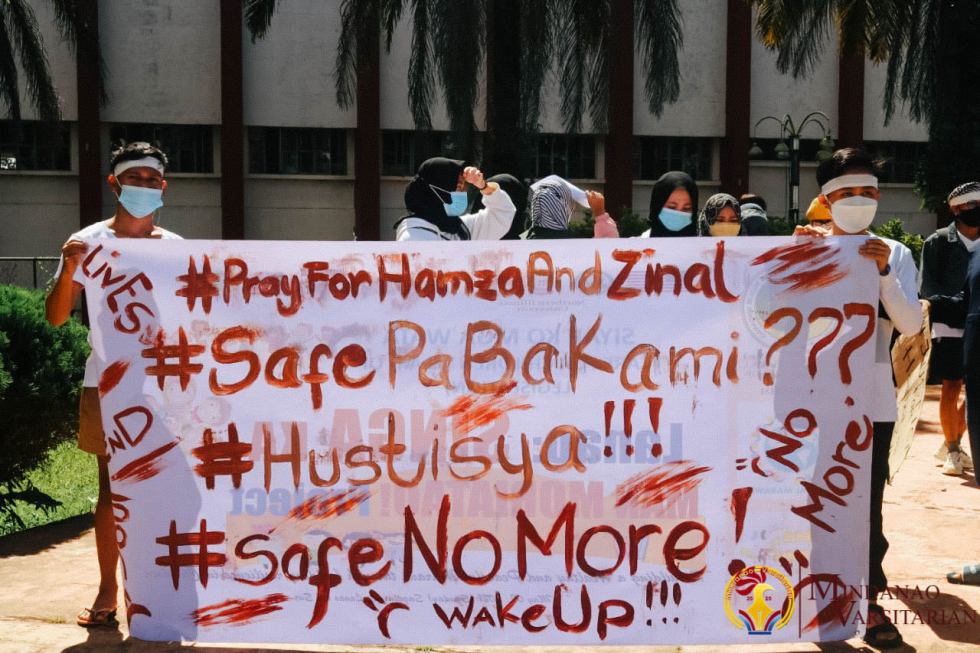 SAFE NO MORE. Students at Mindanao State University main campus in Marawi City stage a peaceful demonstration on September 15 to demand justice for the killing of their two fellow students. (Photo courtesy of Alia Pangarungan | The Mindanao Varsitarian)

CAGAYAN DE ORO CITY – Gripped with fear after the shooting of two students early this week, students at Mindanao State University (MSU) Main campus in Marawi City are demanding from the school administration to ensure security measures to stop the killings inside the state university’s premises.

Killed at the university’s commercial center Tuesday evening, September 14, were Hamza Rauf, a Physical Education student, and Zinal Omar, who was studying to be a civil engineer. Both were on their third year.

Lt. Col. Nelson Madiwo, Marawi city police chief, told reporters that witnesses saw at the crime scene two suspects on board a motorcycle with no plate.

He said the they recovered four empty shells from a .40 caliber pistol.

“We now have information on the suspects and we are conducting hot pursuit operations right now,” Madiwo said.

MSU’s student publication the Mindanao Varsitarian has condemned the killings and demands justice for the victims.

“As a student-friendly institution, the Mindanao State University should uphold utmost peace and security among its students and staff. Such cases not only stain the good image of the university, but also result to fear among students and hinder them from continuing their usual lives within the campus vicinity,” the student publication said.

“We demand strengthened, consistent, and working security mechanism in the campus. We do not want to witness another killing of an MSUan,” reads part of the stament.

In an online interview Thursday evening, September 16, Asmerah Sarip, Mindanao Varsitarian editor-in-chief, said many students have felt the chilling effect of the shooting as parents are concerned over the safety of their children who are enrolled at MSU’s main campus.

“The fear has eased temporarily as the campus has been busy with the laptop distribution,” Sarip said.

She also observed the presence of peacekeeping personnel inside the campus, although she noted this could also be due to the ongoing distribution of laptops, which started Sept. 16.

“As of now, we are still waiting for President Macaayong (who assured) that within a month, additional CCTVs and street lights will be installed in the different areas of MSU,” Sarip said, adding that the campus’ entrance gates will have stricter security protocol.

For his part, Dr. Habib Macaayong, MSU system president, has joined the studentry in condemning the killing of the students.

“The MSU-Main Campus Administration and the entire appalled community condemn the insensate fatal shooting of two students yesterday. This abominable act of violence is an assault on the ideals that we as a civilized, God-fearing, and peace-loving Muslim community lives by,” Macaayaong said.

During an in-campus protest Wednesday, September 15, students participated in a solidarity march with some of them carrying banners that signify they no longer feel secure inside the state-run university.

“We demand justice for the two MSU students who were mercilessly shot and killed inside the campus yesterday. This is a brutal act, which the City Police of Marawi needs to investigate, for the culprits to be rightfully punished. Our sympathies and condolences to the families of the victims, Omar M. Zinal and Rauf Hamza,” Adiong said.

Over the past few years, the MSU main has seen its share of violent attacks that happened inside the campus.

Among them is the arson-murder of university professor Othello Cobal, Erwin Diaz, 22, a graduating student of Hotel and Restaurant Management, with hands tied behind their back on October 25, 2012.

Samuel Go III was shot dead at the commercial center on June 2, 2014.

Crish Lanne Masancay was also shot at the MSU commercial center on December 8, 2014.

Jovert Algoso, a balut vendor, was shot dead inside the campus on January 29, 2013.

An ambush also killed a boy and three soldiers from the 103rd Infantry Brigade while 10 others were wounded after unidentified assailants ambushed soldiers inside the campus on August 8, 2012.