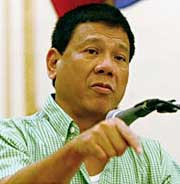 Will Duterte stick to his guns in his verbal war with the Church?

Mayor Rodrigo Duterte just can’t help himself sometimes. This week, the mayor called the Catholic Church’s promotion of natural birth control as “stupid.” “Sex is an instinct,” he said in his TV program last Sunday. “It’s natural for men to have sex. And this instinct is something that cannot be stopped by counting the days of the calendar and then after reaching that certain day, you do it,” referring to the rhythm birth-control method. “The population control program of the Church is stupid. It is not at all working.”

Then again, Duterte has been developing this habit of backtracking on his statements and positions. Or, to put it more accurately, he dishes out sound bites that the media would lap up and then modify these later. Let’s see if he can stick to his guns in his verbal tussle with the Church.

Another Duterte related item: The anti-drugs chief in Northern Mindanao told Cagayan de Oro councilors that Duterte may have been misinformed in his earlier statements about drugs in Mindanao.