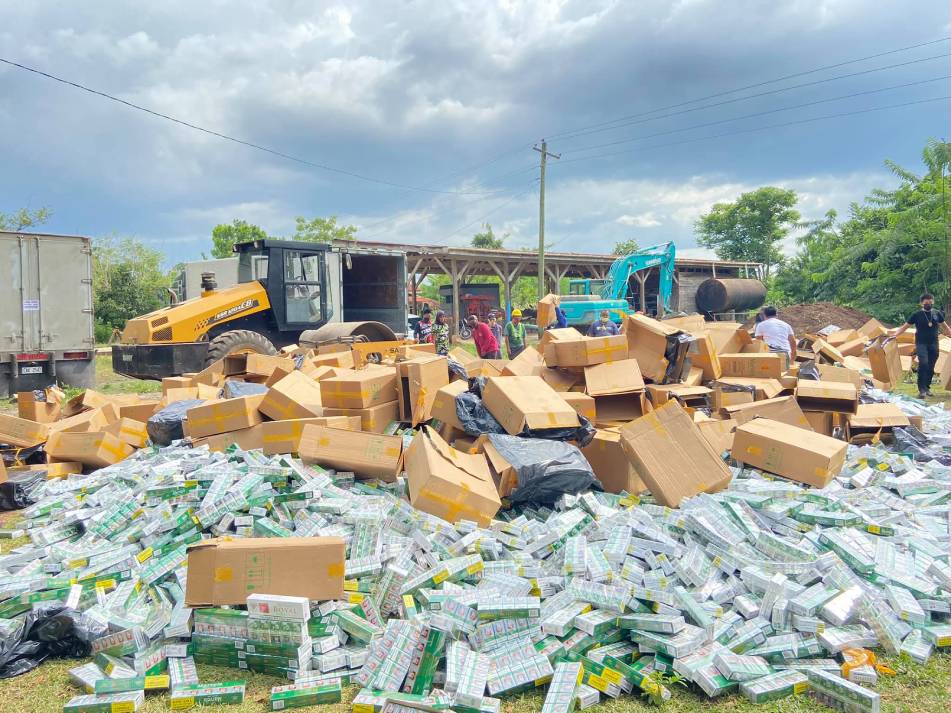 Photo shows the pile of imported and misdeclared cigarettes estimated to be worth P50 million that were destroyed by the Bureau of Customs in Northern Mindanao at a facility in Manolo Fortich, Bukidnon on July 28. (Photo courtesy of BOC-10)

CAGAYAN DE ORO CITY – The Bureau of Customs in Northern Mindanao (BOC-10) has assured it will continue to be on the lookout for illegally shipped goods that enter local ports following the seizure and destruction of wrongfully declared imported cigarettes anew.

This pronouncement came after the BOC-10 destroyed P50 million worth of cigarettes from China at a facility in Barangay Mantibugao, Manolo Fortich, Bukidnon on July 28.

The contraband, declared by the importer as pieces of office furniture, arrived at the Mindanao Container Terminal (MCT) port in Tagoloan, Misamis Oriental on Sept. 18, 2020.

Confiscated were 1,700 master cases or 85,000 reams of cigarettes carrying local and imported brands such as Two Moon, Mighty, Marvel, and Royal.

Valiente said the items were consigned to Denian Dry Goods Trading based in Davao region.

The apprehension of the contraband, Valiente said, “is still a result of our continuous intelligence sharing with other government agencies and the international intelligence community to ensure our border protection against smuggling.”

Lawyer Elvira Cruz, BOC-10 district collector, said the consignee will be facing charges for violating section 1400 (misdeclaration of goods description) of Republic Act 10863 or the Customs Modernization and Tariff Act.

Valiente said they have to step up their monitoring as traders who engage in illegal shipment are also innovating.

These business operators who import contraband, he said, are “finding ways and means on how to skin a cat, so to speak.”

“[Cigarette trading] is a lucrative business. There are unscrupulous businessmen who want to earn fast money. They will devise means to outsmart us – if they can outsmart us,” Valiente said in a phone interview Saturday, July 31.

One of those ways is to label the cigarettes as Philippine made so the operators can tell Customs authorities that their products are locally manufactured and not imported, and therefore, they can pay less taxes, he said.

But Valiente said they are keeping their vigilance so that no illegal imports can pass through the region’s ports without the Customs intelligence’s knowledge.

“While the products are still in transit and on their way here, we have already received information from our counterpart in the international intelligence community,” he said.

Valiente said the Customs’ good relationship with the other intelligence agencies in other countries have so far been very helpful in curbing the entry of illegal products into the Philippines and Northern Mindanao.