Duterte on Martial Law in Mindanao: I’ll be harsh 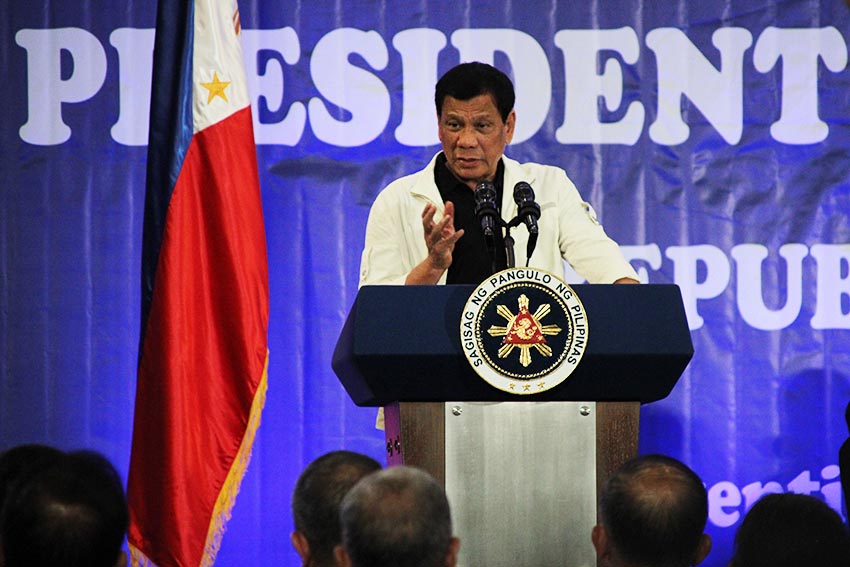 ‘HELP ME, OR I WILL DECLARE MARTIAL LAW.’ In this file photo, President Rodrigo Duterte addresses some 300 chief local executives from Mindanao on Feb. 9, 2017 at the SMX Convention Center in Lanang, Davao City asking them to help in solving the problems of terrorism and the proliferation of illegal drugs in Mindanao, or else he will have to declare Martial Law.(Paulo C. Rizal/davaotoday.com)

“Pero ang Martial Law is Martial Law ha. So kayo mga kababayan ko, you experienced Martial Law. It could may not be any different from what the President Marcos did. I’ll be harsh..,” Duterte said in an interview with Presidential Communications Assistant Secretary Mocha Uson inside the presidential plane en route to Manila on Wednesday.
Duterte cut short his state visit to Russia following clashes between government troops and suspected local terrorist group in Marawi City on Tuesday.

“Pero ang Martial Law is Martial Law ha. So kayo mga kababayan ko, you experienced Martial Law. It could may not be any different from what the President Marcos did. I’ll be harsh,” he said.

“I was asked one time, during the campaign doon sa La Salle, I was asked how I would deal with terrorism. I said, I will be harsh and sinabi ko nga sa lahat… do not force my hand to it. I have to do it to preserve the Republic of the Philippines and the Filipino people,” Duterte said.

Meanwhile, Duterte said he was able to have a last minute meeting with Russian President Vladimir Putin.

“I was able to have a last minute… almost an hour, last minute meeting with President Putin. I was able to communicate all the things that I wanted to tell him. Maganda naman ang ano… positive naman ang talks,” Duterte said.

In a press conference in Moscow on Tuesday night, Defense Secretary Delfin Lorenzana said around 2 pm Tuesday joint elements of the Army and the Police tried to serve a warrant of arrest on Isnilon Hapilon at Barangay Basak Malutlut in Marawi City when they were met with firefight or firearms.

He said the gunfire came from the group of Hapilon.

Lorenzana said firefight ensued and that a police officer and two soldiers were killed while 12 were wounded.

He said the Maute group burned several facilities: the St. Mary’s Church, the City Jail, the Ninoy Aquino School, and the Dansalan College.

While there is no implementing guidelines yet on the 60-day Martial Law in Mindanao, Lorenzana said they will implement “control of movement, searches and arrest of detained people, suspension of writ of habeas corpus.” (davaotoday.com)