Duterte to Reds: agree to an indefinite ceasefire 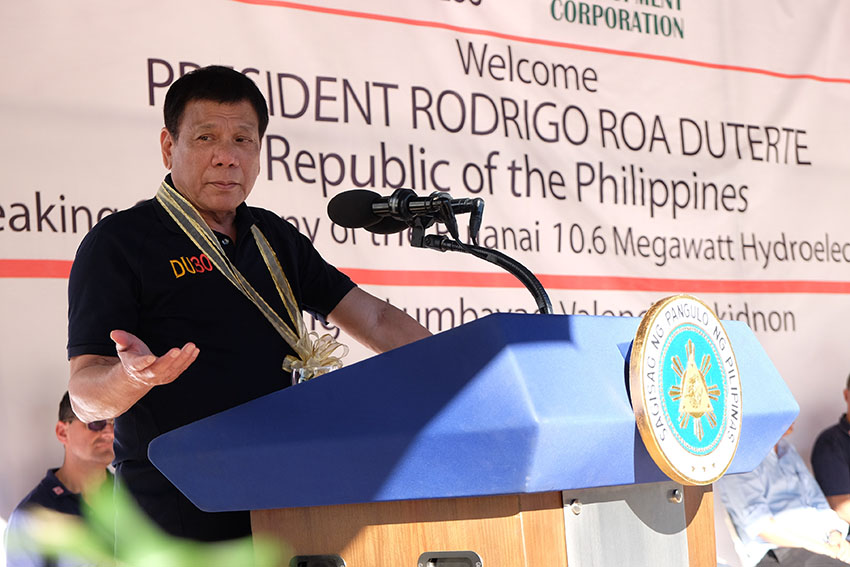 VALENCIA CITY, Philippines — President Rodrigo Duterte reiterated his demand to the communists to sign a document of a bilateral ceasefire agreement with the government before releasing some 100 political prisoners.

During his speech at the groundbreaking ceremony of the Pulanai Mini Hydropower Project here Fridayafternoon, Duterte stressed that he wants an “indefinite ceasefire” signed.

“Sabi ko sa kanila, produce to me a document which says that you have agreed to indefinite ceasefire; do not put the term. Huwag kang magbigay ng timeline because this would be a long and winding road sa negotiation,” Duterte said.

(I told them, produce to me a document which says that you have agreed to an indefinite ceasefire; do not put the term. Do not give a timeline because this would be a long and winding road in the negotiation.)

He said he is a friend to the communists but that “(I)t is always the interest of the government that should prevail.”

“Kaibigan ko sila, I talk to them, I used to travel widely sa Mindanao. I go to where they are but as mayor. I have to communicate, hindi areglo, communicate so we can have an open channel to talk,” he said.

(They are my friends. I talk to them. I used to travel widely in Mindanao. I go to where they are but as a Mayor. I have to communicate, not to settle, but to have an open channel to talk.)

On Thursday, Duterte also said that he cannot release the detainees because they are his “last card”.

“Ang alas ko yung nasa kulungan… Playing a poker game here, maubos ang baraha ko. I-release ko lahat yan, ano pang pag-uusapan namin (Those who are in prison is my last card… Playing a poker game here, my cards will run out. If I release them all, what is there for us to talk about),” he said during n interview at the ground breaking ceremony of the new Bicol International Airport terminal in Albay Thursday afternoon.

The National Democratic Front was quick to denounce Duterte, saying his  “allusion to the peace negotiations as a high-stakes poker game is deplorable, as it tragically leads to the inhumane treatment of close to 400 political prisoners as trump cards and the callous sweeping aside of justice by his deft playing hand.”

On the matter of ceasefire, NDFP Peace Panel Chair Fidel Agcaoili said, “(T)he NDFP has already announced its willingness to sit down with the GRP peace panel and work on a bilateral ceasefire accord and have it ready for signing by the third week of January by the parties’ respective principals.”

The NDF added that the “bilateral ceasefire can take effect in 48 hours, the timeframe within which the President said he would order the release of all the political prisoners.”

In a statement on Friday, the government peace panel negotiating with the National Democratic Front (NDF) said it would recommend to Duterte “the release of detainees based on humanitarian grounds and the promulgation of an amnesty proclamation.”

“When we say humanitarian grounds, these are prisoners which are categorized either as sickly, elderly, or those who have been detained for a long period of time, and women,” GRP Panel member Angela Librado-Trinidad clarified.

“The panels have been collating all the information with respect to this effort so that a substantial number of prisoners will be released before we resume our talks in January next year,” she added.

Last December 2, Duterte granted presidential pardon to four communist rebels convicted of murder and kidnapping who have long been recommended for pardon but not acted upon by the previous administration.

The House Special Committee on Peace, Reconciliation and Unity also started its deliberations on the amnesty bill submitted by Pampanga Representative Gloria Macapagal-Arroyo and the house resolutions calling for the immediate releases of prisoners.

Arroyo, who is also the House deputy speaker, filed House Bill No. 490 seeks to grant amnesty for the members of the Communist Party of the Philippines/New People’s Army/NDF and other individuals involved in past political conflicts.

Under the 1987 Philippine Constitution, the granting of amnesty is lodged to the President with the concurrence of both chambers of Congress.

“There is no prohibition in the Constitution that says Congress cannot initiate an amnesty measure,”  Panel member Rene Sarmiento, who was also one of the framers of the Constitution, said.

“There is always reference to Congress in so far as the amnesty is concerned. In other words, we will listen to Congress and seek their recommendations. This is not setting aside the role of Congress when amnesty proclamation is concerned,” he added.

“Political prisoners have suffered unjust arrest and detention, torture and other rights violations, including inhumane treatment in jail, because of their defense of people’s rights,” she said.

The Ecumenical Advocacy Network on the Philippines (EANP) urged the government to release all political prisoners “unconditionally.”

It said most of the prisoners are “illegally detained during the Aquino Administration.”

“The failure to provide them with adequate medical care and safe living conditions has already contributed to the deaths several prisoners and an infant.  Many are now sickly, some are elderly, and several have been detained for more than ten years,” it said.

Agcaoili maintained that “The NDFP stands by its position that the release and amnesty of the political prisoners as a matter of justice and compliance with agreements will serve as impetus to a more stable ceasefire and vastly improve the atmosphere for negotiations on socio-economic reforms.” (davaotoday.com)