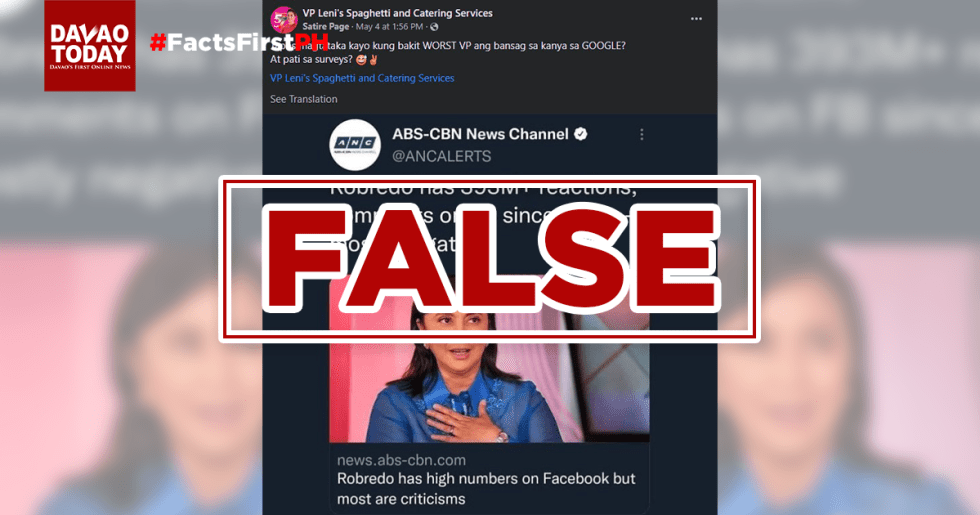 CLAIM: VP Leni’s Spaghetti and Catering Services, a Facebook (FB) page which claims to be a satire or parody, posted on Wednesday, May 4 a screenshot of a report from ABS-CBN News channel with the headline, “Robredo has 393M+ reactions, comments on FB since 2016 — mostly negative.”

The page wrote the caption, “Tapos magtataka kayo kung bakit WORST VP ang bansag sa kanya sa GOOGLE? At pati sa surveys?” (Yet, you wonder why she is called the worst VP in Google and the surveys?).

Google and the reference surveys made by research organizations did not make any declaration of Vice President and presidential aspirant Leni Robredo as the worst Vice President.

Google Trends, a website by Google that analyzes the popularity of top search queries in Google Search across various regions and languages, uses graphs to compare the search volume of different queries over time.

In the first week of April, Google Trends showed that Robredo is in the top spot at 41%. This means she was the most searched among presidential candidates in a specific period of time. Former senator Ferdinand ‘Bongbong’ Marcos Jr., son of the late dictator Ferdinand Sr., came in second at 29%. Other candidates are Sen. Manny Pacquiao, Sen. Ping Lacson, and Mayor Isko Moreno.

Meanwhile, the ABS-CBN report released in May 3 is the fifth in a series on the presence of this year’s presidential candidates in FB.

Based on ABS CBN’s research, the volume of interactions on FB by and about Robredo since 2016 is the second biggest among the 2022 presidential candidates. She got 393,292,110 reactions, comments, and shares. However, the posts came mainly from her detractors and critics.

Keywords like “Robredo”, “Leni Robredo’, and “VP Robredo” were used to generate these numbers through the search function of CrowdTangle, “a public insights tool from Meta that makes it easy to follow, analyze, and report on what’s happening with public content on social media.”

The said tool is available for FB partners who are in the business of publishing original content like ABS-CBN News. The counting of interactions, however, does not distinguish between positive or negative sentiment.

Robredo’s FB page got the most interactions in 2016 when she ran and won for Vice President against Bongbong. Since 2017, FB interactions involving Robredo are criticisms. In 2020, however, the Office of the Vice President has been actively posting details on their services like relief operations. In 2021, Robredo declared her intent to run for president and got the support from civil society groups who actively posted on FB about her.

There is one, however, who called Robredo “the worst VP ever”. Rigoberto Tiglao, in his column published last April 4 at the Manila Times said “we’d be crazy to make her president”. He reposted his column written in October 2019 when he compared the current vice president to the past ones to prove his point.

Tiglao is the same person who charged four media organizations — Vera Files, Philippine Center for Investigative Journalism, Rappler, and MindaNews — as funded by US bankrollers and are campaigning for Robredo.