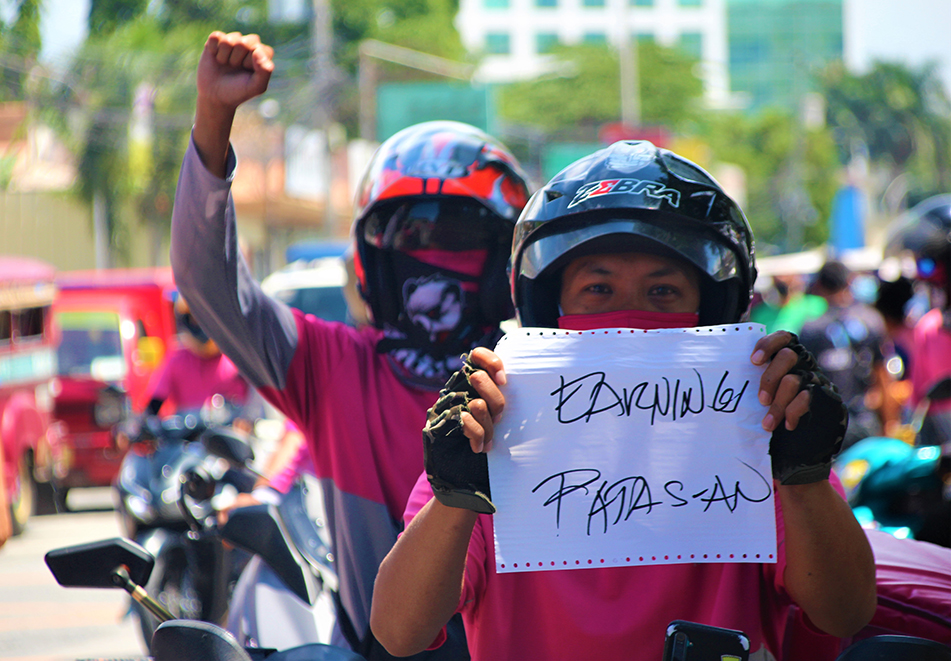 NO DELIVERIES. Around 300 Foodpanda delivery riders stage a motorcade protest at Roxas Avenue on Thursday, July 15, 2021 against their company due to unfair labor. Among the issues they raise are the sudden termination of work, discrepancies in the computation of percentage per delivery and the call for salary increase.

DAVAO CITY- A month after staging a protest against the management of Foodpanda Philippines Davao, members of the Davao United Delivery Riders Association Inc. (DUDRAI) filed a complaint before the National Labor Relations Commission (NLRC) on August 23 to seek justice for their case.

The riders raised their complaint demanding for transparency in the computation of their rightful earnings per delivery, and the lack of insurance and social protection. They also questioned the ten-year suspension on drivers for staging a day-off protest last July 15 as management did not agree to a dialogue with them.

The Foodpanda riders’ protest earned support from netizens, who were surprised to find out the reason why there were no deliveries that day. The hashtag #BOYCOTTFOODPANDA trended on social media, as many called out the company for its labor practice against the riders.

Majority of the estimated 300 riders who joined the protest had already been reinstated, but their issues are still not addressed.

“It has been more than a month, but we have not received any reply from the management on the issues of the riders’ status of employees and their entitlement to workers’ benefits and protection. Instead of listening, the management off-boarded several riders for voicing their sentiments,” said Edmund Carillo, DUDRAI President.

Carillo said the riders who were reinstated were classified under Batch 4 or 5 category or those riders with “inactive status”. Carillo said that these batches of riders are under the “no schedule category” mostly waiting for delivery during dawn to early morning.

DUDRAI said Foodpanda management issued a final warning for the reinstated workers to not commit any violations of their freelance agreement. They shared the management’s message to Davao Today: 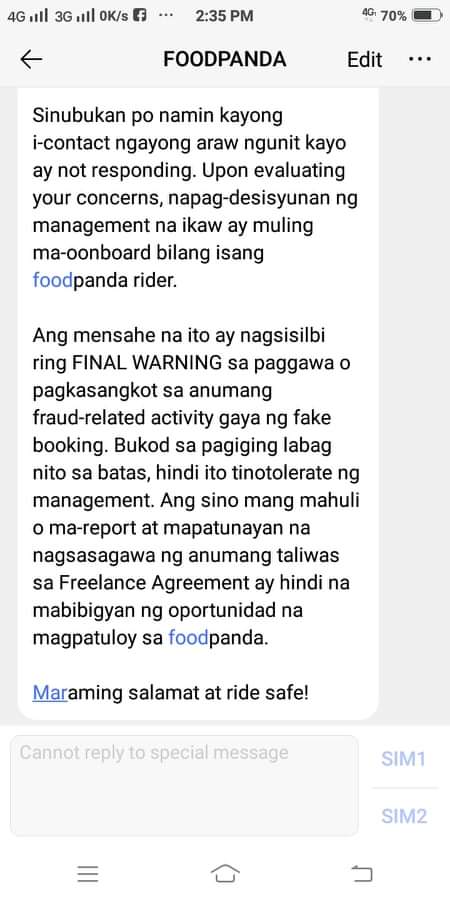 Screencap of the actual notification from Foodpanda

DUDRAI said they are challenging Foodpanda management’s claims that they are independent contractors and thus do not qualify as employees.

“We are essential workers, and it is high time that we challenge Foodpanda’s narrative that we are mere independent contractors. We assert that we are not independent contractors, but employees, and thus deserving of workers’ rights and protection,” said Carillo in a press release from their group, arguing that delivery riders fall under the category of employees under the control test.

“Foodpanda has been amassing large profits because of the food we deliver from food chains to the customers. We are under the company’s control from the moment we log on to the food delivery app, but when we have concerns regarding our rights and welfare, we have no management to turn to,” he added.

In an earlier report from Philippine Daily Inquirer, Department of Labor spokesperson Rolly Fracia said the ten-year suspension of access to accounts of Foodpanda riders was part of “technical glitches” in the company’s communication line. Based on the report, Francia said the company “meant to send an indefinite suspension notice but came out from their system is a 10-year suspension.”

In that same report, Labor Secretary Silverstre Bello III also said that the company apologized for their technical glitches.