Millions worth of cigarettes with ‘fake’ stamps seized in CDO 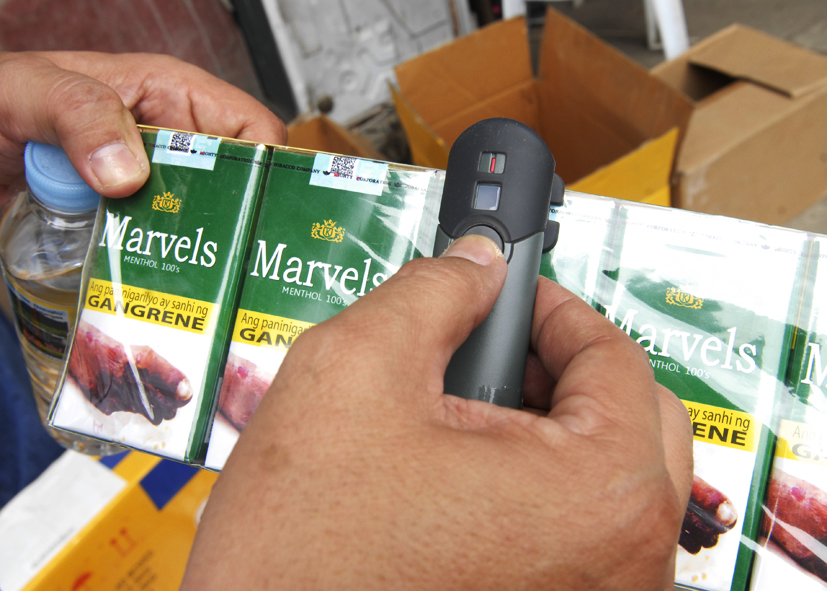 BUSTED. Using a detection device, an official Bureau of Internal Revenue in Northern Mindanao checks the stamps of reams of cigarettes that were confiscated by authorities in Cagayan de Oro on Thursday, March 7, 2019. (Jigger J. Jerusalem/davaotoday.com)

CAGAYAN DE ORO CITY, Philippines – Truckloads of cigarettes worth millions of pesos bearing fake Bureau of Internal Revenue (BIR) stamps were confiscated by authorities in a warehouse in Barangay Kauswagan on Thursday, March 7.

The raid was conducted by a joint team of BIR and National Bureau of Investigation (NBI) operatives based on a tip provided by an informant.

Authorities found the contrabands stocked in a warehouse fronting the national highway in Kauswagan.

Other cigarette packs do not have stamps, Daba added.

Daba told reporters that the country is losing millions of pesos in taxes with the proliferation of illegal items such as cigarettes.

Nolan Gadia, NBI-10 special investigator, placed the worth of the seized goods at about P60 million.

Among the brands that were confiscated were More, Marvels, Mighty, and Fort.

A PMFTC representative, who requested not to be named, has confirmed that some of the cigarettes have the markings of their company.

“We found out that these cigarettes are counterfeit, and not from our company,” the representative said.

Gadia said the cigarettes were contained in appliance boxes and sacks.

“These cigarettes are sold cheaply as the makers do not pay taxes,” Gadia said.

He said the persons behind the manufacturing of these cigarettes were believed to be Chinese nationals.

The suspected persons, once they are identified, will be facing charges for violating revenue regulation 7-2014.

Meanwhile, the Department of Finance (DOF) has warned local government officials who do not act on the illegal cigarette manufacturing and other related activities in their localities.

In a DOF statement posted on the agency’s website, Finance Sec. Carlos Dominguez III has ordered the BIR to coordinate with the Department of the Interior and Local Government (DILG) in filing charges against local government executives found responsible for “neglecting to check the presence of, if not tolerating, illicit tobacco trade activities in their respective communities.”

“We should charge them for not doing their job,” Dominguez was quoted as saying. (davaotoday.com)