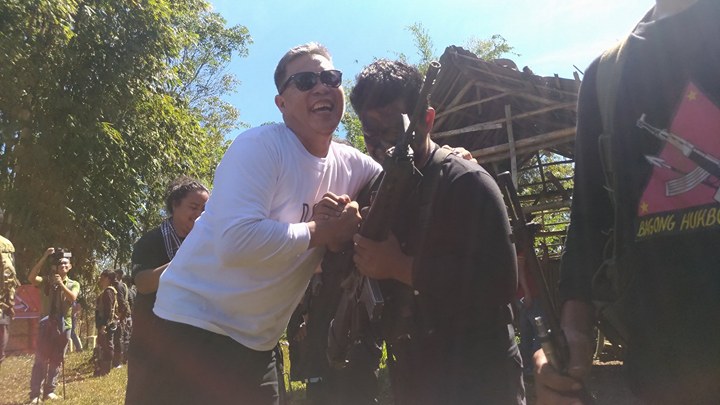 Released Monday noon was prisoner of war (POW) and Police Officer 1 Bristol B. Catalan Jr. of the Makilala Police Station.

Catalan was arrested in August by the NPA’s Mt. Apo Sub-Regional Command. A month later, the NPA released a video of him appealing to suspend military operations to give way for his release.

His release, which took place at Barangay Bagumbayan in the town of Magpet, came two weeks after President Rodrigo Duterte signed Proclamation No. 360, terminating the talks between the government and the communists.

On Monday, Catalan met his wife Geisha Catalan, his children Karen Catalan and Jaspher Catalan, and his cousin Ating Delgado.

During his release, Catalan recounted his experience with his captors.

“I enjoyed my experience, we’ve been to exciting places until they (NPA) built a house for me,” said Catalan.

In a release order signed by Rubi Del Mundo, representative of the National Democratic Front of the Philippines (NDFP) in Southern Mindanao region, Catalan’s “acts and conduct while under the detention and during the investigation and judicial proceedings have been observed as exhibiting remorse for his offenses and voluntary desistance from committing further crimes against the people and the revolutionary forces.”

Catalan offered his gratitude to the NPA, noting the timing of his release. “I’ll be with my family before Christmas.”

The police officer is the first POW released by the NPA after the government issued a formal document cancelling its participation in the peace negotiations with the NDFP.

But NDFP negotiating panel said it is still waiting for a written notice from the government. (davaotoday.com)