DAVAO CITY – The first public appearance of the Bongbong Marcos-Sara Duterte-Carpio tandem was launched on Sunday with a motorcade and rally in Tagum city, 60 kilometers away from the Duterte bailiwick Davao City.

The motorcade of the “UniTeam” started in Carmen, Davao del Norte with a throng of motorcycle drivers that drove all the way to Cuntapay Building in Lapu-Lapu Street in Tagum.

Duterte-Carpio and Marcos waved to well-wishers atop a pick-up truck and tossed ballcaps to supporters clad in green and red shirts, the colors of their respective parties.

The rally was organized by the Marcos and Duterte-Carpio’s parties, the Partido Federal ng Pilipinas (PFP), Hugpong ng Pagbabago and Lakas-CMD.

Davao del Norte Vice Governor Rey Uy was also in attendance and so was Bongbong Marcos’ son Sandro, who is running for congress in their hometown in Ilocos Norte.

Another motorcade and symbolic rally was held in Cagayan de Oro, where participants formed the words “BBM-Sara” along the highway.

In the Tagum City rally, Duterte-Carpio explained why she slid down to the vice presidency despite the strong push for her for the presidency.

“Some of you did not expect, especially here in Davao Region, that I will not as president. There are reasons but I don’t need to discuss it to you,” she said.

She said emotions were high in the past months that made her think much about the decision, until Lakas CMD offered her to substitute for the vice presidency.

“When it was offered to me to run as vice president, I thought this was how I can respond to those clamor that I run for a national position,” she added.

Duterte-Carpio then explained why she chose Marcos based on the latter’s political performance.

“I confidently believe that his experience as governor, congressman and senator will help him in what he can do as president of the Philippines,” she said.

“Binigay ko na sa inyo ang mensahe sa mga nananawagan na akong ay magpresidente pero ako ay nagbise-presidente, bakit (I gave you my message to those who wanted to be president but why did I chose to be vice president)? Because often time in life we find ourselves to be the leader ikaw ang manguna pero sometimes in our lives we need to stand behind another leader,” she ended her message.

There was no rally held in Davao City, the bailiwick of the Dutertes.

Rallies that were initially planned for Mindanao in that day were postponed according to a post by Datulna Benito Mamaluba Jr., leader of Team BBM 2022 in Soccsksargen 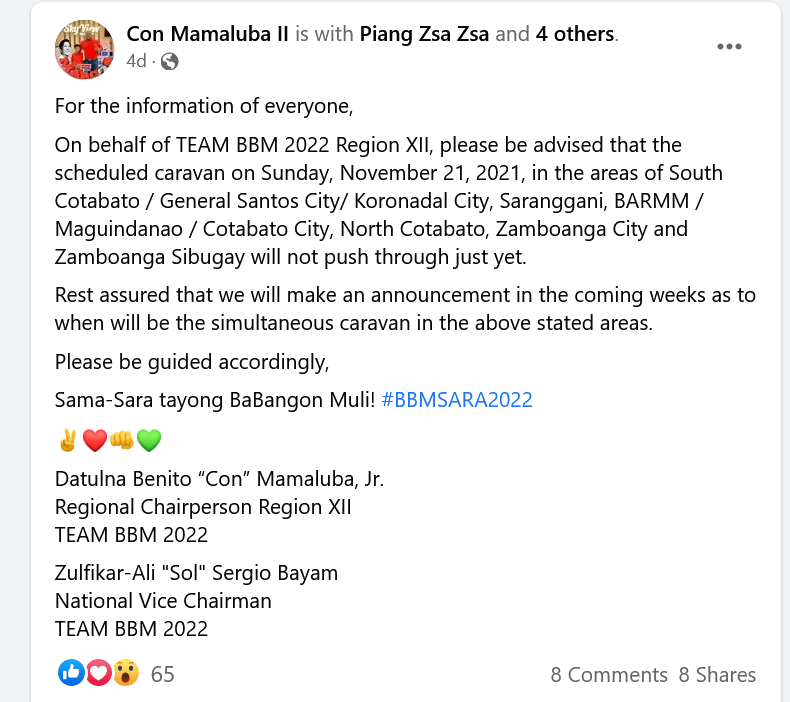 While Duterte-Carpio cemented her alliance with Marcos, her father President Rodrigo Duterte refused to join the alliance.

Duterte had called out Marcos as a “weak leader” and a “spoiled son”. https://mb.com.ph/2021/11/19/duterte-thumbs-down-pdp-lakas-coalition-because-of-marcos/

The president believes it was Bongbong who was behind his daughter’s decision to slide down for the vice presidency despite leading in surveys.