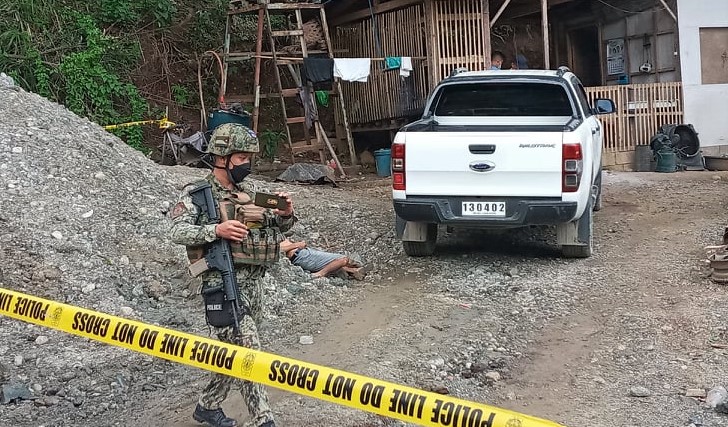 Police identified the victim as Roland Sherwin Uy, 45, married, and an incumbent councilor of Barangay Carmen.

Carmen, Cagayan de Oro’s largest and most populated barangay, is considered as the Uy family’s bailiwick.

The Uy matriarch Lorna is the current barangay chairperson, while the victim’s brother, Raineir Joaquin, is the city’s incumbent vice mayor.

Also killed during the shooting, which occurred at around 1:05 p.m., was Samuel Pabalan, the site’s caretaker.

He said Pabalan was shot in the breast and head, while Uy had gunshot wounds in his stomach, head and arms.

Investigators found Uy sitting on a reclining chair already lifeless. Pabalan’s body was sprawled on the ground surrounded by mounds of sand and gravel.

Acosta said the victims were shot facing the gunman at a medium range.

“The suspect was at least six feet from Uy when he shot him,” he added.

The team from Scene of the Crime Operatives (SOCO) recovered eight fired cartridge cases and four deformed bullets. Investigators have yet to determine the type of firearm used in the shooting.

Rubie Alayuay, Uy’s driver, recounted that they were at the quarry site Thursday morning but went to the downtown area to have some lunch.

He said they returned to the quarry site around noon and rested when they arrived.

Alayuay said he was in the toilet when the shooting started and didn’t get out until he heard a motorcycle sped off.

“I did not get to see the suspect’s face, but I heard that he and kagawad were talking before the shooting,” he said.

Alayuay said the suspect asked Uy the cost for a truckload of sand.

“Kagawad replied P13,000 per truckload and delivery is free. After that, shots were fired. I was so afraid, so I stayed put,” he added.

He added the surveillance camera mounted on the ceiling of Uy’s makeshift office has not been functional and the dashboard camera on the victim’s vehicle was not turned on at the time of the shooting.

Estanilla said Uy did not tell his driver there was a threat on his life.

The police officer said residents did not notice the suspect exiting the site since motorcycle-riding men, usually heavy equipment operators from the quarrying operations in the area, are a common sight in that part of Pagatpat.

As of this writing, the Uy family has not released a statement to the press.

It was also reported that Mayor Oscar Moreno visited the crime scene shortly after the incident, but did not grant interview to reporters.