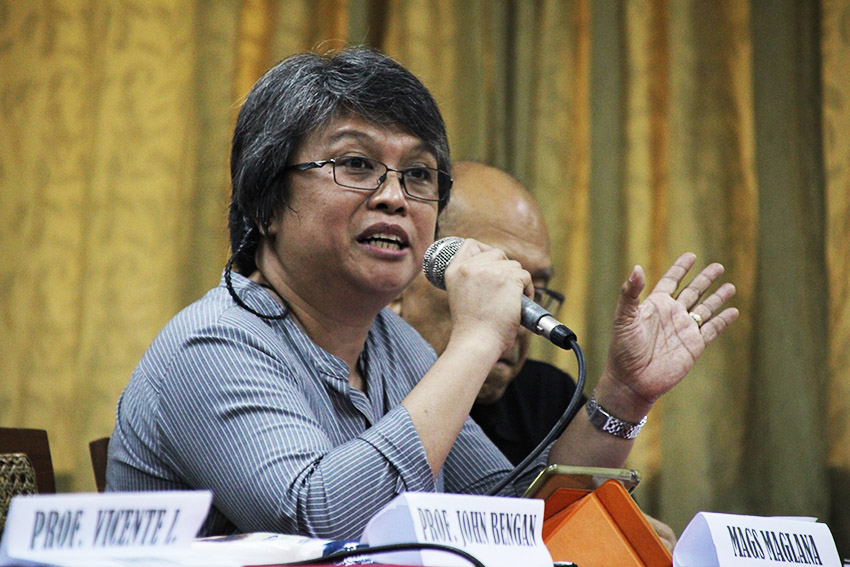 Maglana in a forum dubbed “Translating Digong” held at the University of the Philippines on September 19, 2021 (davaotoday.com file photo)

DAVAO CITY – While candidates in previous local elections vow for change as their platform, this candidate backs it with 30 years of grassroots work for empowerment of communities in Mindanao.

Maria Victoria ‘Mags’ Maglana, a development worker, peace advocate and convener of the political alliance Konsensya Dabaw, filed her certificate of candidacy on the last day of filing on October 8.

She is running as an independent candidate, challenging presidential son Paolo ‘Pulong’ Duterte re-election bid for the first congressional district of Davao.

Prior to her COC filing, Maglana’s name did not float among the media as an opponent of Duterte. But she said is running not just to challenge those who are in position but also to win and push for pro-people legislation.

(It is time to throw out the old playbook of governance in Davao City which has been used for the past 35 years. We have been tied to situations where the interests of the few are prioritized at the expense of people’s rights and welfare and good governance.)

Maglana said the decision to run for congress was made after consultation among civil society groups, different organizations, and individuals where they felt the need for someone to run in the first district that has been occupied by Dureza in the 80s, followed by the Nograleses, and now Duterte, all big names in Davao politics.

An underdog when it comes to resources and political machinery, Maglana relies on her track record that include 30 years in working with local government units and national agencies in crafting policies and legislation.

“Working with multi-stakeholders such as national and local governments, civil society, communities, the private sector, and international partners to find common ground and work together for sustainable development and durable peace is one of my forte,” Maglana said.

Maglana also believes her running for congress is not a surprising news.

“(It should not be a surprise for the people of Davao) if someone like me will run for a position against a Duterte (It should always be that) the opportunities are equal to everyone,” she said in a phone interview.

Maglana’s move to run for congress has garnered support on social media with the launch of her Mags Maglana Campaign Page.