When dreams are born in a time of war 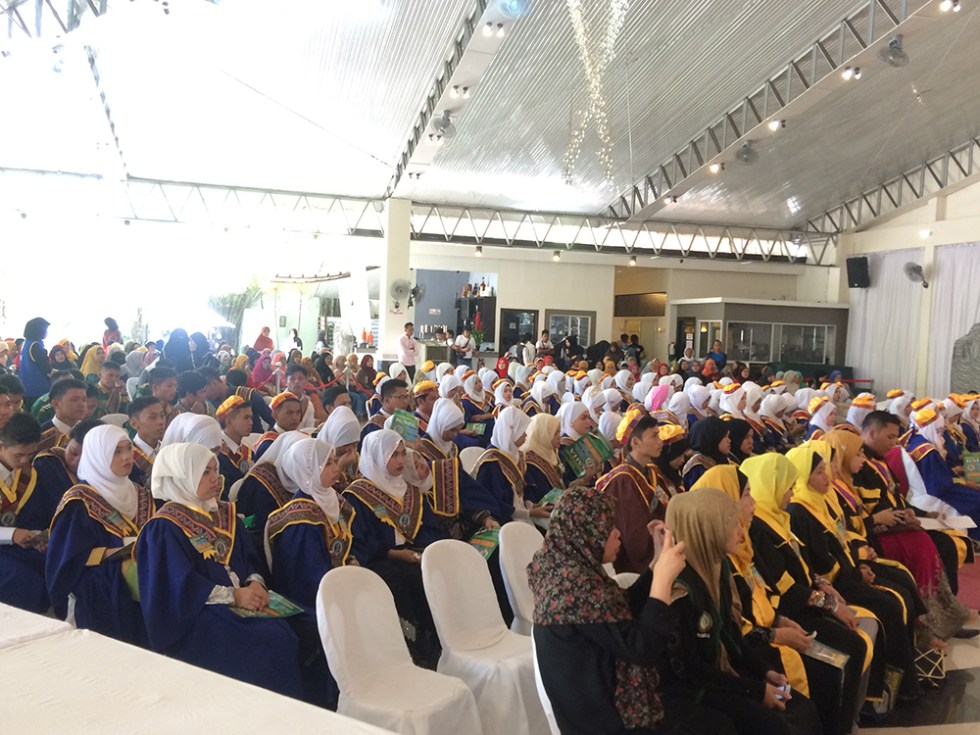 It was never too late for more than 100 students of Khadijah Mohammad Islamic Academy in Marawi City to hold their graduation rites on Monday, September 11 in Iligan City. The school’s graduation day was supposedly set on May 24, a day after the ISIS-inspired Maute group attacked Marawi City. (Divina M. Suson/davaotoday.com)

ILIGAN CITY, Philippines – On May 24, Sittie Lainie Decampong Asum woke up early to prepare for her graduation day. The night before, she and her classmates had their final practice.

But instead of dashing into Khadijah Mohammad Islamic Acadamy in Marawi, her family rode a jeep, in a hurry to escape from the city attacked by group of militants who pledged allegiance to the Islamic State of Iraq and Syria.

Asum recalled that the jeepney was overflowing of passengers that she had to stand outside holding at the jeepney’s stirrup.

Asum said even when the fighting between the Maute group and government forces started in the afternoon of May 23, their graduation practice pushed through. They were all unaware that the fighting is much worse and would drag on to almost four months now.

Their family has prepared for her party but the banquet, their house, everything were left behind the now war-torn city. Asum’s family had to travel 12 hours to Baloi, Lanao del Norte, a place which is ordinarily only 20 to 30 minutes away, just to get to a house of their relatives where they temporarily stay.

Asum was among the 142 students of KMIA who received their diploma on Monday, September 11, during their graduation ceremony held here.

During her graduation, Asum turned emotional when she got her diploma for finishing her Bachelor in Elementary Education.

“I wept because despite of what happened to us in Marawi, we are able to graduate. All the sacrifices of my parents paid off. This is our ultimate dream, to finish school.”

Among the crowd, Noraida Sarangani was also in tears. Her eldest son, Loveb has finished Bachelor of Science in Criminology. Loveb was only wearing his white shirt and denim pants when he marched on stage.

She said three of her sons, including Loveb, took criminilogy to follow their father’s footsteps. Sarangani’s husband is a police officer.

“I am happy because my son is now educated, he did not lose his way. I was afraid that he will be recruited by the ISIS but I was able to guide him with the help of our Almighty Allah,” she said.

Sarangani assured that despite of the crisis in Marawi where there are policemen killed while fighting against the terrorist, she will support the ambition of her son to enter into the Philippine National Police.

Cosain said he felt sad not wearing his toga which he left at home back in Marawi. But he said he was relieved when he saw that he was not alone.

Cosain’s place in Sarimanok has already been cleared by the military. Yet his family cannot go back yet as the fighting in some portions of the city continue. But Cosain said despite what happened, they are happy to have finally graduated.

Half of the graduates of KMIA were not wearing the traditional graduation toga and cap. They left it at their homes when they flee.

Marching without a parent

But while some of them were not wearing their toga, 23-year old Johaira Bayabao is marching without her mother in tow.

Bayabao, a graduate of Bachelor in Elementary Education said when they evacuated from Marawi they went straight to Coron in Palawan to live with their relatives.

She was the only one who was able to come back to Iligan for the graduation.

Bayabao said her next plan now is to look for a job.

“My mother asked me to come back to our province in Lanao del Sur and look for a job,” she said.

Bayabao’s family is from Barangay Raya Madaya in Marawi City. Their village, one of the main battle areas between the militants and the government, has now turned into rubbles.

In his graduation message, Anggay Abdullah, a graduate of Master of Arts in School Administration, appealed to President Rodrigo Duterte to treat them “as his children” because they have treated the president “as their father.”

“We voted for you with the mind that we can entrust our future to you, but not to ruin our future, not with this Martial Law,” Abdullah said.

He appealed to the government to allow the displaced people of Marawi City to return immediately to their homes.

President Duterte said he could not assure that the fighting in Marawi will be over this month. He said he can wait a year if the military tells him they need another six months. Congress has extended the implementation of Martial Law until the end of December this year. (davaotoday.com)