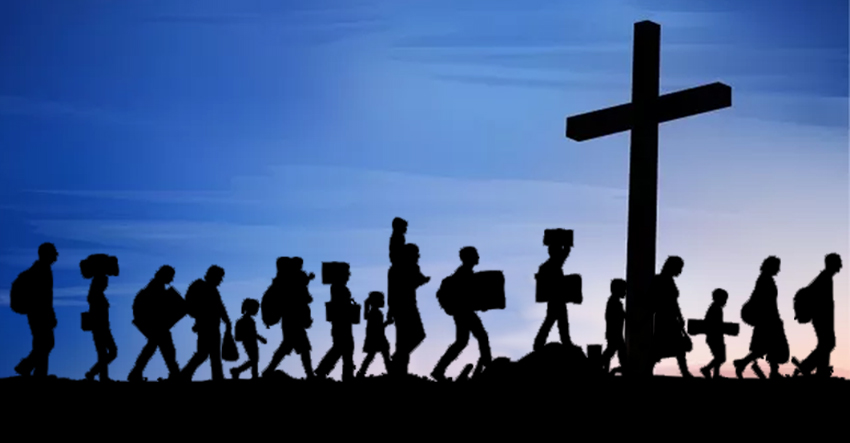 Mounted along the fences that serve as markers of the border between the US and Mexico, are hundreds of crosses each bearing a name. They look like markers for the Way of the Cross, but these memorials are the final testament to the fate that fell on the thousands of undocumented immigrants from Latin America. These are the remembrance of those who dared to cross the border with the hope of finding a better life. Many of them were men, women, and children who risked getting arrested, killed, raped, or even dying because of exhaustion as they traverse the vast empty desert for days. Some succeeded, but many others perished. But to those who survived, the experience is life-changing. A young priest from South America once told me that many people opt to go to the Holy Land for pilgrimages and see the sites where Jesus suffered and died. But he went to say that if one genuinely desires to understand what Jesus went through, then they should walk the paths of these immigrants.

Often, when we think of Holy Week, we are reminded of the time when we seek penitence and offer our prayers. The many devotional practices and the long liturgies of these holy days, bring us to reflect on the passion, death, and resurrection of Christ. But do we go beyond the rituals? If one only does the rituals, it is not surprising that come Easter Monday we are back to our old ways. The practices and worship themselves good, but they must also bring us to the realization that even today, the suffering of Christ continues in the plight of those living in the margins. He is there with the undocumented immigrants trying to cross the borders, to refugees seeking a new home, to our poor who are the most vulnerable victims of injustice, violence, and killings. Christ is there with them, and through them, he carries his cross.

While the Paschal Mystery is at the very core of the celebration, for many Catholics, there is also a special place for Mary in the liturgies. On Good Friday, we see her in procession as the Dolorosa, the Sorrowful Mother. Later that night or on Saturday in other places, another procession of the Soledad takes place. Then early on Easter morning, we see her at the Encuentro meeting her son, the Risen Christ.

Although it is non-scriptural, the movement from sorrowful to joyful depicts a transformation that was supposed to have happened to Mary whose son was unjustly killed by those in authority. The story of Mary is the story of one who went through the darkness of death and sorrow to the joy of the resurrection. The story of Mary is also the story of countless mothers who lost their sons and daughters. They are the mothers whose children opted to cross the borders never to be seen again. They are the mothers whose sons were gunned down and left on the streets like some road kill. Only for these mothers, many are still wrapped in the darkness longing to see the light. For them, it is still difficult to cross that threshold to live. The one thing that they cling on too is hope: Hope for justice, hope that God will intervene, hope that one day they will see each other again.

Year after year, the rituals of Holy Week will come and go. But how have they transform us? Perhaps this year, as we go about the rituals and liturgies, we could make a difference if we try to listen to the voices of those crying for justice, to cross the borders of difference and animosity, and to walk the paths of the people closest to Jesus heart: the poor and the sinner.

Fons Suico, CSsR, MD, STL is a doctoral student in Moral Theology at the Jesuit School of Theology in Berkeley, California.