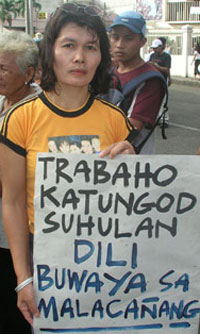 Strong Women. Because of the hard times, more and more Filipino women are forced to take on a more important role in the economy. This Davao woman decides to take the matter a step farther. (File photo by Barry Ohaylan/davaotoday.com)

Majority of overseas Filipino workers (OFWs) sent abroad are now women, and this highlights their increasingly vital role in ensuring their families’ survival, according to IBON Foundation.

Government figures reveal that some seven out of 10 OFWs who are deployed as new hires are women. Many of these women are hired in perilous jobs such as domestic helpers or entertainers, with only a small percentage of them working in professional categories such as medical professions.

Women OFWs, because of their large numbers, also account for one-third of the country’s $10 billion remittances from overseas workers, according to findings of the United Nations Population Fund’s 2007 State of the World Population Report (SWPR).

According to IBON executive editor Rosario Bella Guzman, the above figures only serve to spotlight the increasing economic burdens placed on women in the wake of the Arroyo administration’s failure to create regular and productive jobs. The average unemployment of 11.3% and underemployment rate of 18.5% during the last six years of her term is the worst six-year period of these rates in the country’s history, she pointed out.

When household incomes are not sufficient to meet families’ needs, it is the women who find ways to help make ends meet, Guzman said, which explains the increasing feminization of overseas labor, as women are compelled to work abroad to earn more. (Ibon Foundation/davatoday.com)