Duterte: Agriculture is the backbone of the economy 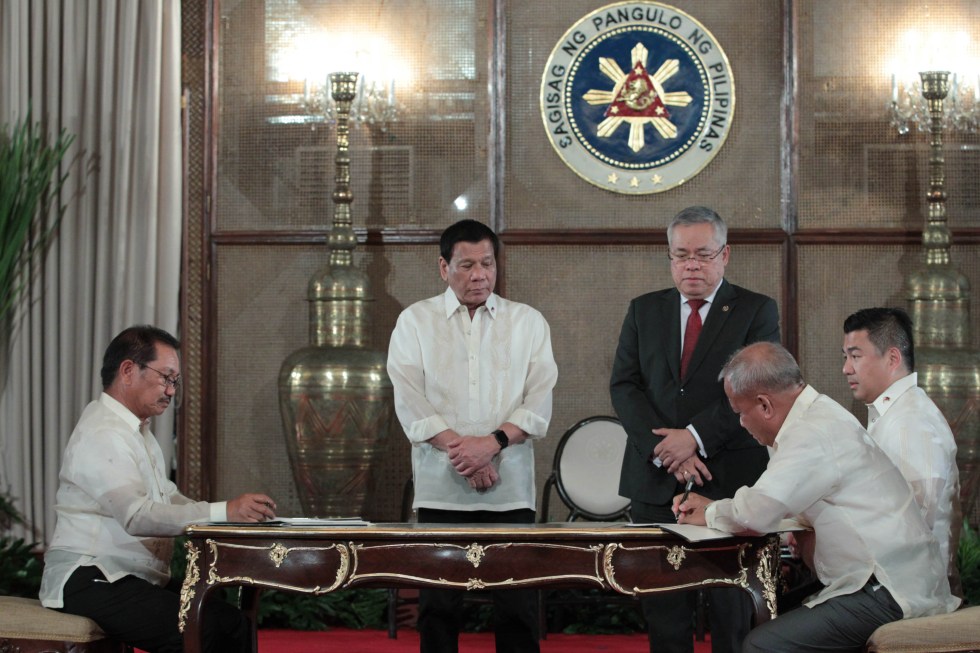 DAVAO CITY, Philippines -​ President Rodrigo Duterte said even as technological advances are evolving, the government should see to it that it is providing assistance to the agriculture sector.

“It is, after all, considered as the backbone of the economy. It forms the basis for food and nutrition security and provide raw materials for industrialization. These are important factors that allow progress to take place in the society,” Duterte said during a gathering of agricultural sectors’ stakeholders lead by the Department of Agriculture Tuesday.

“No one should be left behind in our journey of progress and self sufficiency. Remember that we must prioritize the welfare for the disadvantaged and the marginalized,” he said.

Duterte stressed that his administration is for the poor and encouraged the public sector to empower our farmers and our fisher folks “in order to achieve our goals of a bountiful Philippines so that one day in the not so distance future, no Filipino shall go hungry.”

Duterte led the launching of the National Color-Coded Agriculture Guide Map (NACCAG) which guides farmers what to plant in their farms during the ceremonies held at the Rizal Hall of Malacañan.

Agriculture Secretary Emmanuel Piñol said the NACCAG was completed in the past seven months by the Department of Agriculture under its Adaptation & Mitigation Initiative in Agriculture (AMIA) Program as part of the President’s commitment to modernize and improve Philippine agriculture so the country could produce sufficient food for all Filipino by the end of his term in 2022.

Piñol said “the NACCAG incorporates and digitalizes all the latest scientific data on soil analysis, climate impact, geographical hazards and weather prediction from PAG-ASA under the website www.farmersguidemap. gov.ph.”

“Data from the website will need to be downloaded in each community so that the farmers could access them,” he said.

He said they plan to put up information centers in the busiest agricultural areas and communities in the country so that farmers could easily access the data from the website.

“The NACCAG or Color-Coded Agriculture Guide Map is a campaign commitment of President Duterte which will enable farmers and fishermen to obtain interactive data on things related to farming and fishing,” he said.

By typing the name of the region, province and town, a farmer will be able to determine what crops could be grown ideally in his area, down to the barangay level. The website will also have a link to the PAG-ASA website so that fisherman would know when a storm occurs.
Landlessness

However, farmers group Kilusang Magbubukid ng Pilipinas laments that landlessness is still the main concern of farmers in the country.

“Yes, we are the backbone of the economy, but the government fails to develop the agriculture sector and favors more the landed elites,” said Antonio Flores, spokesperson of Kilusang Magbubukid ng Pilipinas.

He said agricultural lands in the country are used to plant crops that are meant for export.

Flores said if the lands remain on the hands of only a few businessmen, advances in technology for farmers will not benefit those who are marginalized.

Flores stressed that there is a need for economic reforms that will favor the farmers.

“The existing neoliberal economy is not in favor of the farmers,” he said, adding that the government should pass the Genuine Agrarian Reform Bill.

House Bill 555 aims to “break up land monopoly and implement free, fair, just and equitable distribution of the lands” covered by the Act within a five-year period.

It also aims to eliminate all forms of oppression and exploitation in the countryside. The bill also seeks to “transform the farmer-beneficiaries into efficient producers through the institution of an integrated, comprehensive, and holistic program of support services and other state subsidies that will nurture them toward improving their productive capabilities.”(davaotoday.com)