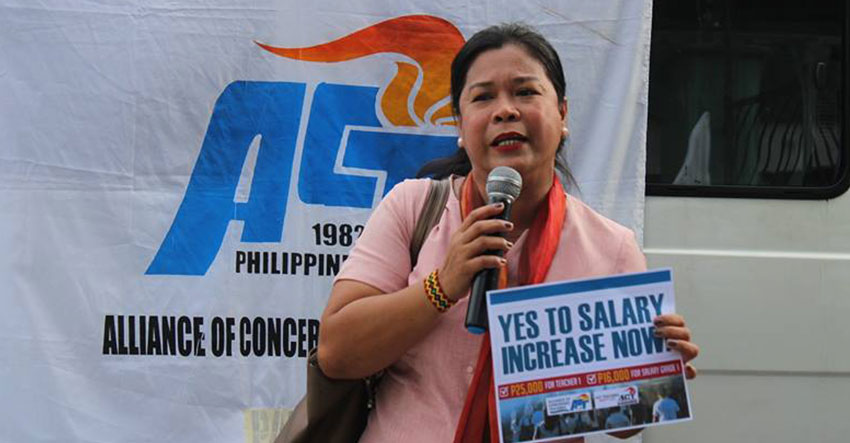 Alliance of Concerned Teachers (ACT) calls to raise the base pay of public school teachers to P30,000. (Photo taken from ACT Facebook page)

The Alliance of Concerned Teachers (ACT) said that instead of fulfilling his promise, Pres. Rodrigo Duterte “essentially downgraded the teaching profession as teachers are now officially the lowest-paid professionals” under the Salary Standardization Law (SSL) 5.

ACT lamented that while police, military personnel, and nurses will enjoy a basic pay of about P30,000 this year, teachers will only have P22,316.

The ACT did not give a detailed comparison though, on the wages received by various government employees.

But each year, teacher Felomina Guleng was anticipating an increase in her family’s monthly expenses, rendering her present salary as Teacher 1 getting further short of food and non-food expenses in the household, as well as mandatory salary deductions and outstanding loans.

She believed that teachers deserve a substantial pay hike.

“While they say that teaching is the most noble profession, but we [teachers] can’t live by just that. We still have children to send to schools, needed to provide food, and prepare for our future,” Guleng said.

The pay hike for government workers, including thousands of public school teachers, will push through starting this month under the SSL 5, after President Rodrigo Duterte signed the P4.1-trillion 2020 national budget on Tuesday, Jan. 6.

The ACT said the salary increase for teachers was below what teachers’ groups in the country were calling for.

For entry-level teachers, their salaries would increase from P20,754 to P22,316 this year, in the first of four tranches of SSL 5 to be implemented until 2023.

Guleng already expected that the increase would only go back as government collectibles “especially with the increase in the contributions of Pag-Ibig, Philhealth and GSIS (Government Service Insurance System)”.

After President Rodrigo Duterte doubled the salary of uniformed personnel, he pledged that teachers would be the next to be given with a pay hike.

Duterte defended his decision of doubling the salary of the military and police, saying the country is a “troubled land” thus he needs soldiers and policemen, who are prepared to die for the country.

“He admittedly and unapologetically gives more weight to his wars, which he thinks would perpetuate him in power, than to the future of the youth and the nation,” Martinez said.

“The meager increases spread in four years will do nothing to resolve the distorted and grossly inequitable government pay, dramatically worsened by SSL 4 which provided for 186–233 percent increase for top officials, while only giving 11–23 percent raise for rank-and-file employees,” ACT said.

The group said that with SSL 5, government workers’ pay would remain below livable and decent levels for the next 4 years, with the “increases hardly covering hikes in the prices of goods and commodities, as well as in additional taxes and mandatory contributions.”(davaotoday.com)