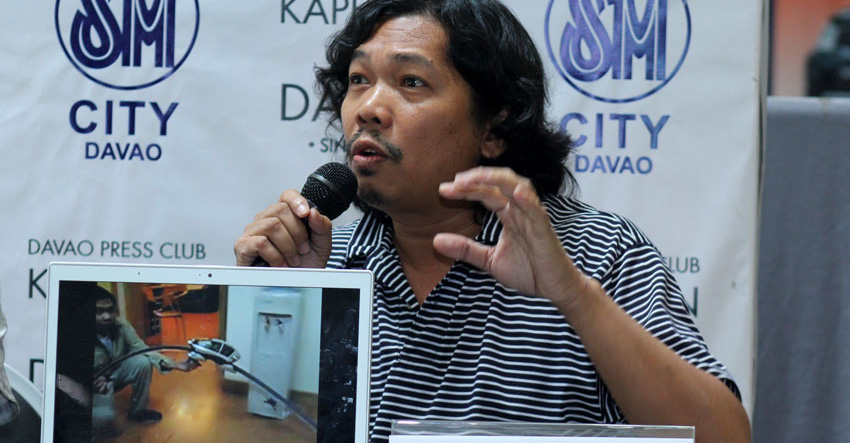 PINOY INVENTOR. Jose Guardo Jr, inventor and chief maglev architect of the Hybrid Maglev Monorail Train shows a video presentation on how it will solve the traffic problem in the Philippines without using too much energy. The maglev (magnetic levitation) train is made of permanent magnet and aluminum material of which the materials can be found in the country. (Ace R. Morandante/davaotoday.com)

DAVAO CITY – The Filipino inventor of the hybrid monorail – which uses magnets – believes that his invention is the cheaper way to solve the traffic problem in the country.

Architect Jose Guardo, Jr. in a press conference on Monday said maglev or magnetic levitation train “is a technology made of lightweight materials which uses electromagnets and neodymium iron boron to create repulsions from the lower part and enable the train to levitate and propel the coach”.

He said Japan and Germany are the first to use this technology.

Japan, Guardo said, has broken the record of 603 kilometers per hour. He said in Shanghai, China, where they use Germany’s invention, the 30-kilometer travel from Pudong International Airport to Lin Yang station “only takes eight minutes running at 430 kilometers an hour.”

“In our invention, we don’t aim for high speed yet because our stations are nearer. Probably we can make it 300 kilometers an hour when traveling long distance. But between station to station, it’s just 65-85 kilometers an hour,” he said.

Guardo said the Filipino’s version of the maglev train is cheaper than that of Germany, which costs US$40.9 million per kilometer of the rail.

“Here we use, lightweight materials like carbon fiber and permanent magnet and aluminum for levitation which is only US$2 million per kilometer,” he said.

Guardo said even the materials needed for the construction of the Hybrid Maglev Monorail Train can be sourced locally.

“I use aluminum for levitation because it is cheaper and it is the most abundant element on earth. The neodymium iron boron is 60 percent iron, which is found in Surigao and is mined by China,” said Guardo.

“The buying rate of high grade (nickel) which has 70 percent iron costs US$9 per ton,” he said.

“This really is beneficial because we don’t need to import the train. The trains from China costs US$1.8 million per coach,” Guardo said.

“Maglev train levitates, so it requires less energy to propel the train,” he said.

He also said that they are proposing that the station here in Davao will use solar power for the train.

Guardo’s team proposes to put up three loops in Davao namely Ecoland loop, airport loop and the downtown loop. The loop he said will help the train avoid occupying the road right of way.

He said the monorail train  “will only travel one way, either clockwise or counterclockwise depending on the situation.”

He also said that unlike the MRT, the supporting structure of the monorail train will only measure one meter by one meter and the rail 1.5-2 meters.

A transportation study by the Japan International Cooperation Agency last year said that traffic congestion in Metro Manila can worsen by 2030 which can cost the Philippine economy P6 billion a day if not addressed.

Guardo said the project is recognized by the Department of Science and Technology 11 and is now planning to have a prototype to test the technology.

He said the prototype only costs P300 million.

Virgilio Sangutan, president of the Davao Inventors Association, said there is a plan now to utilize five hectares of the Mindanao Science Centrum in Bago Oshiro Tugbok district to design five stations. He said a coach of a Maglev train will be used to transfer visitors from a station to another.

Eduard Geguera, operation manager of the project said they have already formed a group of support team composed of electrical engineers and mechanical engineers who are all from Davao City.

He said they already sent their letter proposal to Davao City Mayor Rodrigo Duterte and are still waiting for feedback.

“We also requested documents from the City Planning because there have been feasibility studies that were already conducted, and it is where we will base our design for elevation,” said Geguera.

Guardo said  “we can really claim that this is a Filipino invention. I am sure this can create jobs because we (are creating) a new industry.”

He said once validated, “we can also export this to other countries.” (davaotoday.com)