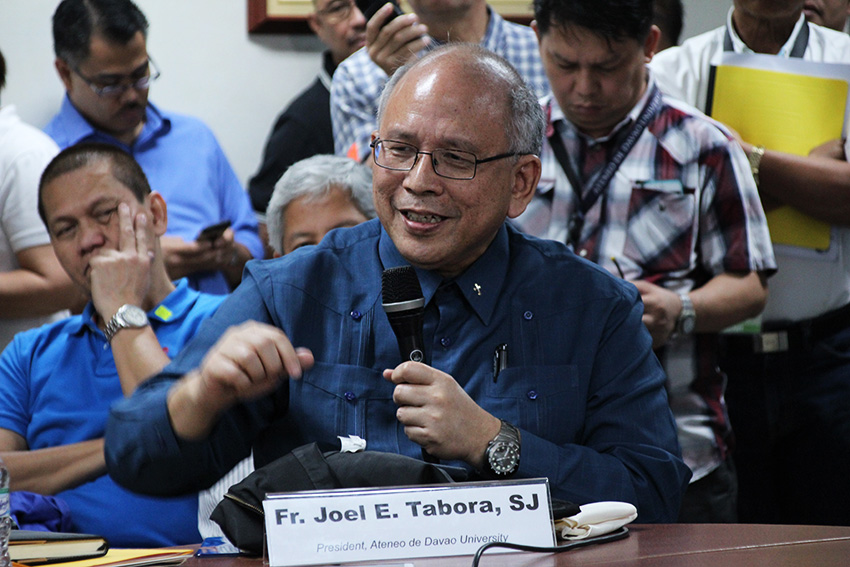 DAVAO CITY — Jesuit priest Fr. Joel Tabora called the Philippine Mining Act of 1995 treasonous and said that it is time for the government to replace the mining policy.

In a press conference on Thursday, August 4, the president of the Ateneo de Davao University explained that the mining policy allows foreign entities to take out the minerals from the country.

“The Philippine Mining Act of 1995 allows foreigners to come in and take our minerals away fully,” he said.

During the summit, various civil society organizations from Mindanao put forward a technical paper to Lopez which outlines Mindanao people’s concerns on the environmental situation.

The groups highlighted the negative and irreversible effect of mining in the country, citing the Marcopper mining disaster and Semirara mining incident.

In 1996, millions of tons of mine waste spilled into the 26-kilometer Boac River in Marinduque during the  Marcopper mining disaster. Last year, the Semirara Mining and Power Company collapsed due to landslide in Caluya, Antique, nine mine workers reportedly died in the accident.

“We do not want another Marcopper disaster or Semirara incident before we take action. We have lost so many lives and even more hectares of forest lands to accommodate mining companies. No new mining permits should be issued,” the groups said.

They also urged DENR to strictly monitor the operations of mining companies on their environmental compliance, “violations should be strictly penalized,” it said.

“Despite claims of mining industries that they contribute to the Philippine economy, data shows that mining industries roughly chip in 1.2 percent to the gross domestic product (GDP). Communities hosting these mines also have the highest incidence of poverty,” said the groups.

Among their recommendations for the mining industry are: 1) Immediately suspend the implementation of the Philippine Mining Act, particularly its provisions on accepting and processing any and all forms of mining applications; 2) Implement a third-party audit of all large-scale mining operations in the Philippines; 3) Support the enactment of the Alternative Minerals Management Bill;  4) Reassign all military units, personnel, and equipment of the Armed Forces of the Philippines (AFP) performing protection duties for mining operations to other areas. Disband and disarm any and all paramilitary units and personnel providing protection duties for mining operations; 5) Professionalize the AFP, DENR and National Commission on the Indigenous Peoples to inculcate ‘operational objectivity’ with respect to mining operations; 6) Design and implement a training program to enhance the capacity of LGUs and CSOs to address environmental issues, including, but not limited to, the various aspects of mining operations; 7) Establish a study-group to inquire into small-scale mining operations in the country, which will develop policy recommendations for the government; and 8) Revise existing rules and regulations of the environmental impact assessment system to make it mandatory for all mining applications to adopt a watershed and airshed framework in the conduct of their environmental impact studies.

Bayan Muna Representative Carlos Isagani Zarate, who now chairs the Committee on Natural Resources said that the Philippine Mining Act of 1995 “is facilitating the slow death of our national patrimony.”

“I certainly agree with my uncle, Fr. Tabora. It is a betrayal not only of the present generation, but also of future generations,” he told Davao Today.

Zarate said among the priorities of the committee is to review the current mining policy and the crafting of a new law that will govern the mining industry. He said the new policy should protect the country’s remaining resources and aid in the Philippine’s industrialization. (davaotoday.com)