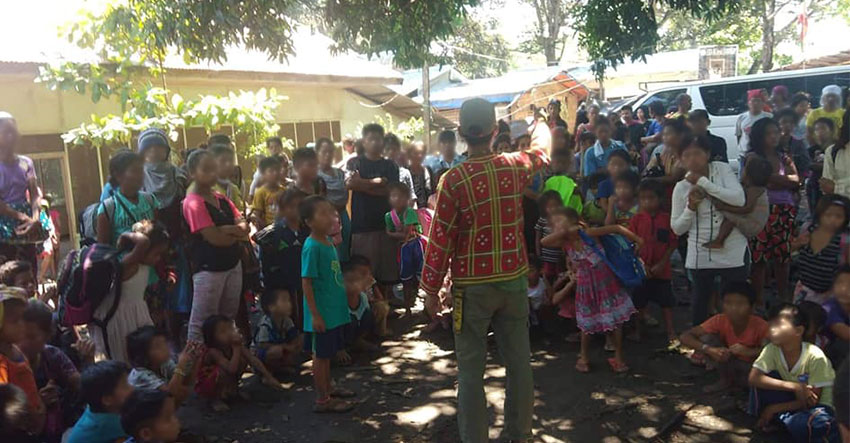 DAVAO CITY, Philippines — The Lumad group PASAKA slammed the military and paramilitary group Alamara for forcing Lumad evacuees to return to their communities amidst the height of intensive and continuing military operations in the hinterlands.

The group reported the presence of the leaders of Alamara and military personnel in civilian clothes outside the UCCP Haran on Saturday last week and forcibly made some families of evacuees leave the Haran Compound by having them aboard in trucks.

The group added that certain Awing Apoga, leader of Alamara in Talaingod, Davao del Norte also came over the next day and made a call on leaders and evacuees to return to their communities.

Apoga also made a warning that more Alamara leaders will be coming in the next few days.

Monzon’s clarification came to belie the allegations that some Lumad families had already escaped from the UCCP Haran Compound.

“We recognize the right of every Lumad and we do not refuse such request,” Monzon said.

He also expressed fear the Alamara and the military will use Lumad families they forced to go home against their fellow evacuees who are still inside the evacuation center in Haran.

“They will possibly be declared as fake surrederees, and accuse other IPs (Indigenous Peoples) staying in Haran as members of the Communist Party of the Philippines-New People’s Army (CPP-NPA),” Monzon said.

Monzon’s group also emphasized that the continuing harassments of Alamara and military in the countryside are the very reason why Lumad families fled from their homes and communities.

In 2014, over a thousand Ata Manobo from the hinterlands of Talaingod evacuated after army troopers occupied their communities and launched aerial bombings.

The Lumad families who evacuated also reported of harassment made to them by the soldiers and members of Alamara.

Since then, hundreds of Manobo families continued to seek temporary refuge inside the UCCP Haran compound.

“In the past four years, we experienced how they harassed and killed our fellow Lumad and students, how they intimidated our students and teachers, how they forced Lumad to surrender and recruited them into the Alamara,” PASAKA said in a statement.

Monzon said that “even in the evacuation center, the Lumad are still facing harassments from the military and Alamara.”

Forcing the evacuees to go home also took place in the past, citing the case when Congresswoman Nancy Catamco had a dialogue with them in 2015.

Monzon said Catamco also forced the evacuees to go home despite the real threats to their lives.

PASAKA also accused agents of the military and Alamara as those behind the burning of the evacuation houses inside the compound sometime in 2016.

Asked for comment on the issue, Captain Jerry Lamosao, spokesperson of the Army’s 10th Infantry Division told Davao Today on Wednesday that “there were no military in the UCCP Haran last weekend.”

On the other hand, Col. Eugene Osias, assistant chief of staff for Civil-Military Operations (CMO) of the Eastern Mindanao Command (Eastmincom) was quoted in a report of Philippine News Agency dated May 21, confirming the “rescue” of IPs on Saturday.

“For a long time, the call of the Lumad evacuees is for them to return home. They have been staying here for more than four years. They will only go home if their demands are met, that includes the pull out the soldiers from their communities, the end to the attacks in Lumad schools, disarm and disband the paramilitary group, and put an end to martial law,” the group’s statement said. (davaotoday.com)