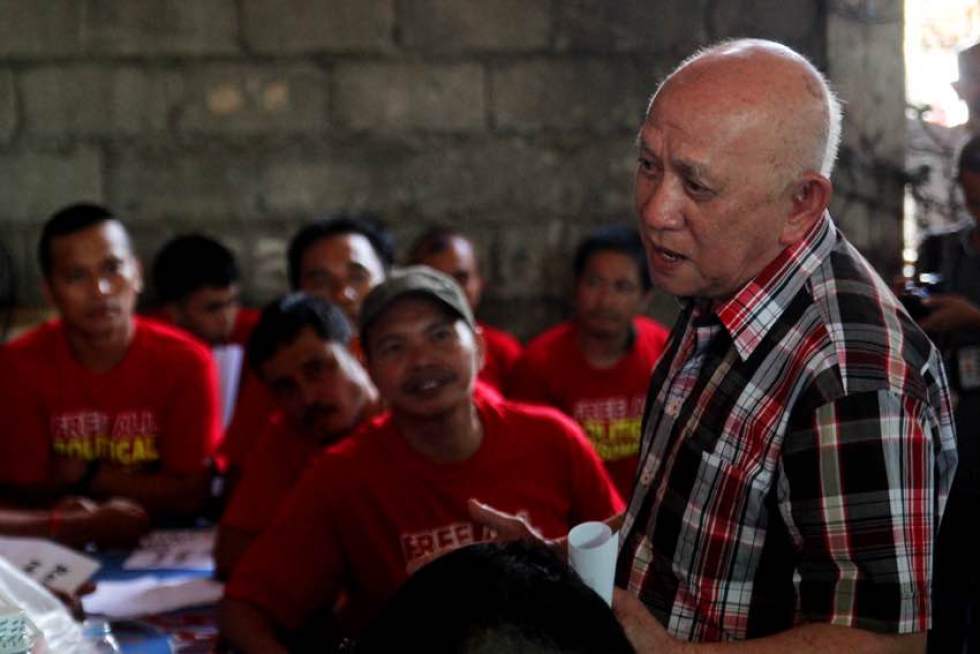 DAVAO CITY, Philippines — Except for one political detainee who died while in prison, the numbers of political prisoners released and those arrested under the present government are equal, the National Democratic Front of the Philippines said.

In a statement Sunday, Fidel Agcaoili, chairperson of the NDFP panel said out of the 411 political prisoners they submitted to the president for release, a total of 39 detainees were released, 20 of whom were freed based on the merits of their case while 19 were in consideration of the Joint Agreement on Safety and Immunity Guarantees.
Even with the releases of political prisoners to participate in the peace talks, the NDFP said they are back to the almost exact figure of political prisoners since President Rodrigo Duterte assumed office

“Not only has President Duterte failed to deliver on his promise to release all political prisoners. His regime has, in fact, added 39 more political prisoners to the roster! This includes three JASIG holders of Documents of Identification signifying that they are consultants of the NDFP. They are Ferdinand Castillo, Rommel Salinas and Promencio Cortez,” Agcaoili said.

He said the number composed less than 10 percent of the total count of political detainees.

“The NDFP submitted a list of 411 political prisoners to President-elect Rodrigo Duterte in May 2016 for release on various grounds or through amnesty (as proposed by him) in connection with the agreement to resume peace negotiations between the GRP and the NDFP upon his formal assumption to office in June. Of this number, only 19 or barely 5 percent were released on bail in August 2016,” Agcaoili said.

He said 17 of those released by the government to participate in the talks were covered by the JASIG and two were freed for humanitarian reasons in accordance with the Comprehensive Agreement on Respect for Human Rights and International Humanitarian Law (CARHRIHL). Both the JASIG and CARHRIHL are agreements signed by the government and the NDFP. JASIG grants immunity to peace consultants while they participate in the peace negotiations.

Meanwhile, three of the other JASIG-protected persons are still in detention namely Eduardo Sarmiento, Emeterio Antalan and Leopoldo Caloza.

Agcaoili said the parties agreed to release the three through pardon in their Oslo Joint Statement on October 9, 2016.

“Therefore, their continued detention is both a blatant violation of the JASIG and in betrayal of trust and the GRP’s express commitment,” he said.

Sixteen more political prisoners were released after August last year. But Agcaoili said their release was based on the merits of their cases.
In December last year, four political prisoners namely, Dindo Absalon, Rico Bodino, Bonifacio Suyom and Martin Villanueva, were granted pardon.

“Their applications for pardon were initially approved during the time of Gloria Macapagal-Arroyo but were only signed by the current regime with the revival of the Presidential Committee on Bail, Recognizance, and Pardon (PCBReP),” said Agcaoili.

But the demand for the release  of the prisoners resounded louder after ailing political prisoner, Bernabe Ocasla, died on November 25 last year.

The NDFP said the grant of amnesty to all political prisoners will serve as an incentive to push the talks forward.

The communists said the political prisoners were “unjustly detained” and are facing trumped up charges, which violates the Comprehensive Agreement on the Respect for Human Rights and International Humanitarian Law.

Duterte in June last year, said if the New People’s Army is ready to surrender the arms, he might grant all political prisoners amnesty.

“If they are ready to surrender the arms, and resume their normal role in the society, then I might consider with Congress, amnesty,” he said.

“But there will be no mass release of NPAs who are in our custody. They will only be released, if things go good, fine…Amnesty is given to a group of persons. Yan ang sinabi ko. Wala akong sinabi na i-release ko lahat (That’s what I said. I didn’t say that I will release all of them),” he said.

In December last year, Duterte said he wants the government and the NDFP to sign a ceasefire agreement first before he releases political prisoners. However, he did commit to release old and sickly political prisoners before Christmas time.

“Alam mo, we have to continue and even now they’re asking for the release of 130 political prisoners. Sabi ko, I cannot. I cannot give you that. I’m sorry but I have already conceded so much on the side of the government,” Duterte said in a speech during the lighting of the Malacañang Christmas tree on December 5, 2016.

In an interview with Davao Today during the announcement of the GRP that they do not wish to participate to the fifth round of the formal talks on May 28 in The Netherlands,  GRP peace panel member Atty. Angela Librado-Trinidad said the government remains committed to comply with its obligation to release the prisoners.

As of December last year, she said there were 21 political prisoners already have clearances, 18 of whom are eligible for pardon.

Librado-Trinidad also added there are 200 political prisoners who are on the process of clearing pending cases from different offices.(davaotoday.com)