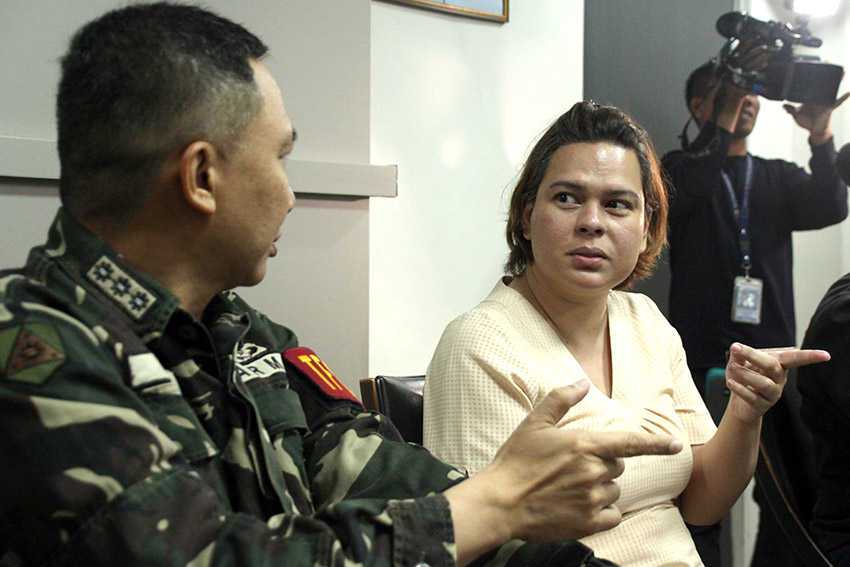 DAVAO CITY, Philippines — With the declaration of Martial Law in the island of Mindanao, City Mayor Sara Duterte-Carpio advised Dabawenyos to remain indoors as much as possible as the entire city is on lockdown amid security threats.

“If you do not have important things to do outside your residences, you just stay home,” the mayor said in a press conference at the Public Security and Safety Command Center in Ecoland dawn on Wednesday, May 24.

The mayor also advised tourists and those without important business to refrain from travelling in the city as more checkpoints will be installed.

“In fact, don’t travel anywhere at all, because Martial Law covers the entire area of Mindanao, especially so here in Davao. Security will be stricter here because this is the hometown of our President,” she said.

Duterte-Carpio added that the police and military “will be quite aggressive in implementing their security measures.”

The mayor said a curfew will be enforced, but declined to reveal details pending the release of official guidelines.

However, she said the imposition of curfew hours is to be expected during martial law.

Duterte-Carpio said she has already ordered the authorities to enforce their mandate once the guidelines are released.

“Once they receive a copy of the Presidential Proclamation declaring Mindanao under a state of Martial Law, and [the suspension of the] privilege of Habeas Corpus, they can pick up people whom they suspect are sympathizers of Maute Group, of Abu Sayyaf, and Isis, and all other identified terrorist groups,” the mayor said.

The declaration of Martial Law came following attacks in Marawi City committed by the Maute — the same group that is suspected by authorities as responsible for the deadly blast in Roxas night market here in September last year.

The President’s state visit to Russia was cut short as the elder Duterte is set to leave Moscow Wednesday and will arrive in Manila on Thursday, 4 am. Abella said Martial Law will be in effect for 60 days. (davaotoday.com)