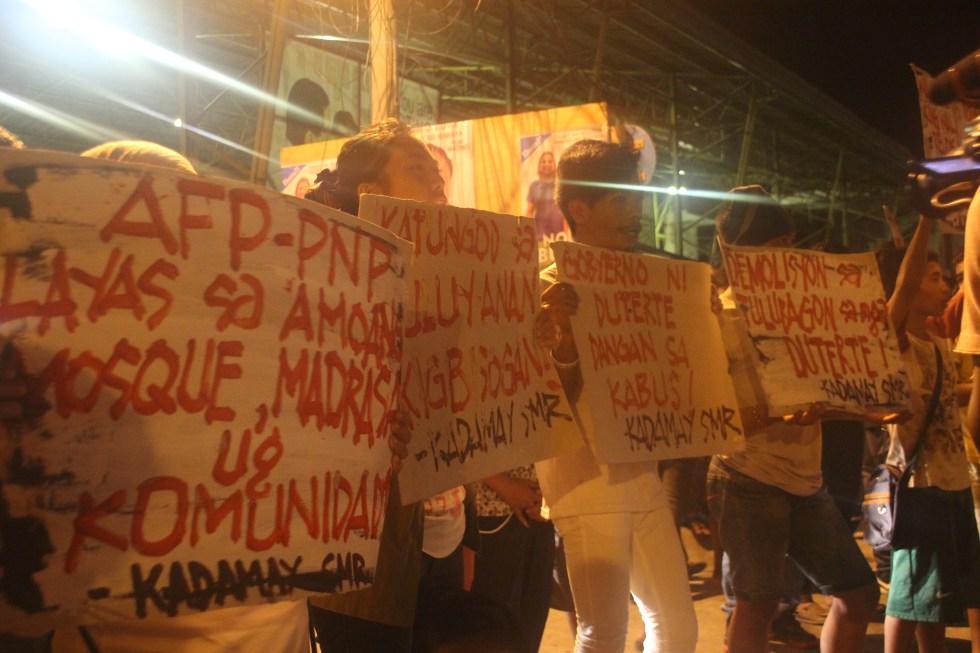 Meranaw residents of Barangay 26-C Salmonan, Quezon Boulevard in Davao City stage a protest on Monday night, May 7, 2018, after their houses were demolished despite negotiations with local officials.(Ma. Dyza B. Libong/davaotoday.com)

DAVAO CITY, Philippines – Hours after losing their homes to a demolition, several residents of Barangay 26-C Salmonan, Quezon Boulevard staged a rally near their community to express outrage.

The residents, led by their group Quezon Boulevard Muslim-Christian Neighborhood Association (QUEBOMACNA) decry that the demolition pushed through as negotiations were held to settle the legal case on their land.

The association filed a motion at the Supreme Court to contest the issued writ of demolition by the Regional Trial Court branch 17.

The group contested on court how a certain Tausug Datu Bahajin Marcos Mahadali bought the 3,515 square meter area they occupied for six decades. They claimed the title Mahadali showed was dubious.

A dialogue was held on April 24 with the Presidential Commission for the Urban Poor (PCUP). There RTC branch 17 sheriff said it is up to the Davao City Police Office (DCPO) as to when they will implement the demolition order.

The DCPO implemented the demolition early morning of May 7, as 1,500 elements from the police, Task Force Davao and PNP SWAT team secured the perimeter of Salmonan, blocked residents from leaving and entering their area, and paved the way for the demolition team to dismantle the structures and houses.

Abdul Agor, one of the community’s Imams who spoke in the protest, questioned why there were so many police and military deployed as they were only less than 50 males in their barangay.

“They pointed their guns on us, as if we’re criminals,” he said.

Agor expressed how helpless they were as they watched their houses being demolished.

“We are the one who developed this area for a very long time, we should be the ones prioritized by government,” he stressed.

Francis Ruba, spokesperson of the group Kadamay who joined the protest, protested why the Regional Trial Court disregarded the motion filed by the association, and called this a “manifestation of human rights violation.”

Ruba added the current situation is contradictory to the promise made by the Duterte administration that there will be no demolition under its term.

“The residents of the Bgry. Salmonan lived here for almost 65 years. But only because of development plans, there are lots of threat on demolition,” he said.

There were 67 households affected which consist of 34 Moro families and 33 Christian families. The displaced residents took a temporary shelter at the Mini-Forest Gymnasium in Barangay 23-C.(davaotoday.com)