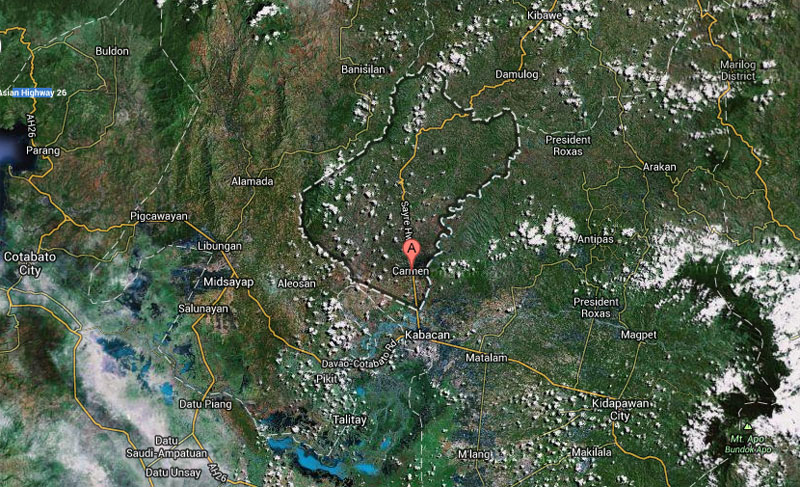 KIDAPAWAN CITY, Cotabato, Philippines — The province of Cotabato was placed under a state of calamity after the 5.7 magnitude quake in Carmen town last Saturday and the series of aftershocks already caused about PHP 60 Million in damages.

Since Saturday evening, at least 160 aftershocks have been recorded.

Cynthia Ortega, officer in charge of the Provincial Disaster Risk Reduction and Management Council, reported that 222 houses have been damaged as of Tuesday afternoon.

“We are expecting more (damages) because our team in Carmen, including officials from the Department of Education (DepEd), is still on the ground for verification,” Ortega said.

Areas that were badly hit are the villages of Kimadzil and Kibudtungan in Carmen town.

The earthquake last Saturday has injured five members of the Labrador family, including four children, when they were hit with falling debris while sleeping.  Their house in Kibudtungan was also damaged.

“I thought we’re all going to die.  That was the strongest earthquake I experienced in my entire life,” said Mary Grace Pardillo, a mother and resident of the same village.

At dawn on Monday, another 5.7 quake rocked the town causing more damages to semi-concrete houses.

Fearing that their houses will collapse and endanger their lives, some residents already installed makeshift tents at the open grounds while others stayed at the villages’ covered courts where they stay at night.  There are also residents who opted to temporarily leave the town.

Classes in all levels in Carmen town and in Molita and Simbuhay villages in Kabacan town have been indefinitely suspended after school buildings were destroyed amid the continuous tremors.

A two-story building in Kibudtungan village, he added, manifested big cracks in posts and walls while its roofings were wrecked.  School buildings in Carmen town’s 10 other villages were also confirmed damaged.  The town has 41 public elementary schools and seven high schools.

Damaged school buildings in nearby Pikit and Matalam towns were also recorded.

DepEd-XII already requested for a structural engineer to assess the status of the affected school buildings.

Taliño-Mendoza has issued a directive to the provincial DepEd office and Engineering offices to plan the construction of temporary learning centers made of light materials.  These will be constructed outside the concrete buildings given the intermittent aftershocks.

“Classes will hopefully resume on Monday (June 10),” she said.

Taliño-Mendoza said this will be used to help the local government build temporary learning centers, repair damaged structures and to augment the cash assistance with PHP 5,000 for families whose houses were damaged.  The fund will also be allocated for the repair of damaged roads and water systems especially in Kimadzil and Kibudtungan villages.

The province will also conduct drills and psychosocial interventions in schools and communities as “incidents of trauma increase due to aftershocks.”

The provincial government has urged the Department of Public Works and Highways (DPWH) to immediately repair the two bridges along the Carmen-Bukidnon road, a national highway.

One of the bridges, the governor said, needs a considerable amount of fund and time to repair the damage with the depression in its approaches.  The other bridge, albeit with no depression, already has a problem with its foundation.

The DPWH has regulated the use of the Mutian Bridge after some cracks were manifested.  At most seven-ton vehicles and cargo trucks are only allowed to pass through.

The national highway, the governor noted, is very important to the local economy as it connects routes from and to Davao City, General Santos, Bukidnon, Cagayan de Oro, Bukidnon and Cotabato.

Meanwhile, the Provincial Disaster Risk Reduction and Management Council and the provincial government have ordered the immediate relocation of families whose houses are settled in the shoulders of Carmen-Bukidnon road.

Based on ground verification, Ortega said, the area is prone to landslides.

Meanwhile the Philippine Institute of Volcanology and Seismology (Phivolcs) station based in Kidapawan City dismissed fears of a possible volcanic eruption in Carmen town.

A volcano allegedly exists between the hilly portions of Kibudtungan-Kimadzil boundaries, according to an Arumanen-Manobo community leader in Kibudtungan village.

“We visited the area, there’s no volcano there.  What we noticed are just hills,” Philvocs station head Hermes Daquipa said.

He reiterated that the June 1 earthquake which rocked Carmen town was tectonic in nature, adding that based on their studies, it would take six months or more before the situation will stabilize.  Aftershocks, he said, could be part of the stabilizing activity of the rock formations underground.