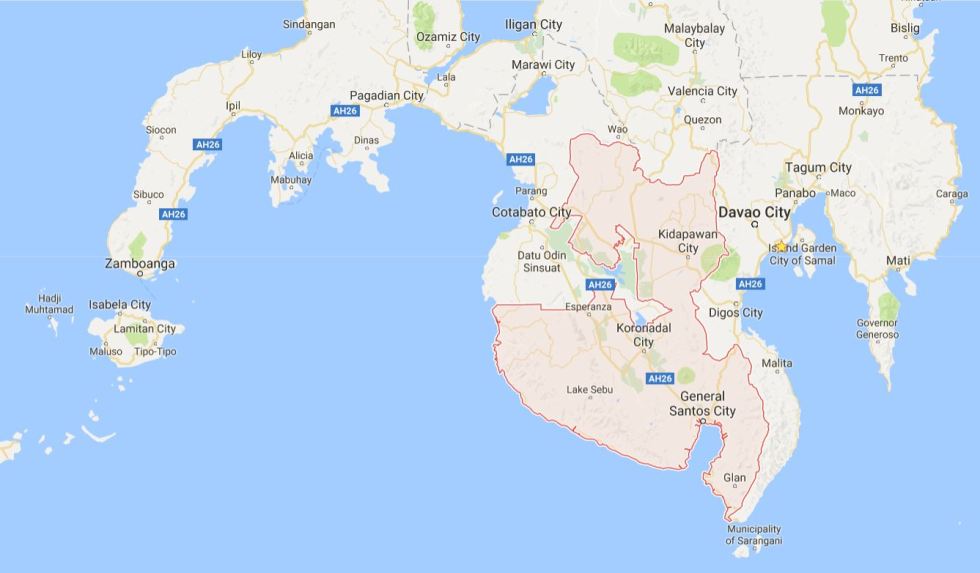 Central Mindanao has been renamed as the SOCCSKSARGEN, which comprise the provinces of South Cotabato, Cotabato, Sultan Kudarat, Sarangani and General Santos City. (google maps)

DAVAO CITY, Philippines — A climate advocate group said Wednesday that several areas in Central Mindanao are vulnerable to climate change because these areas were far away from large bodies of water.

Jessica Dator-Bercilla, the senior advocacy and policy officer for Asia and the Middle East of Christian Aid, explained that some regions across the country will experience increase in temperature and a decrease in rainfall.

“There are several portions of the Philippines that will be greatly affected. But [Central Mindanao] is the most disturbing for us because a very wide land area will be affected,” Bercilla said who conducted a Science and Policy Research in the Jesuit-run Manila Observatory.

According to Bercilla, these regions are at risk because they are “landlocked” and as expected, temperatures  in these regions will rise while rains will be less.

“It’s a concern because it is an agricultural area. These are areas where poor communities who depend on agriculture for a living are located. So if temperature increases and precipitation decreases, the economic backbone will surely be affected,” she said.

She also said that the Philippine Atmospheric, Geophysical and Astronomical Services Administration (PAGASA), the state weather bureau, predicted that there will be an increase of one degree Celsius in Mindanao.

PAGASA’s projections of “climate scenarios” for 2020 and 2050 has used the PRECIS (Providing Regional Climates for Impact Studies) climate model.

On a global scale, an increase of two degrees Celsius would spell “serious consequences, such as more extreme weather patterns,” according to the Intergovernmental Panel on Climate Change, an international group of climate scientists.

In addition, energy production in Mindanao will also be greatly affected because the water level in hydroelectric dams won’t be enough to sustain its usual energy output, Bercilla said.

“If you have less rain, how will you run hydroelectric power plants? We should be looking for alternatives, but they should still be renewable,” Bercilla said.

Central Mindanao has been renamed as the SOCCSKSARGEN, which comprise the provinces of South Cotabato, Cotabato, Sultan Kudarat, Sarangani and General Santos City.(davaotoday.com)