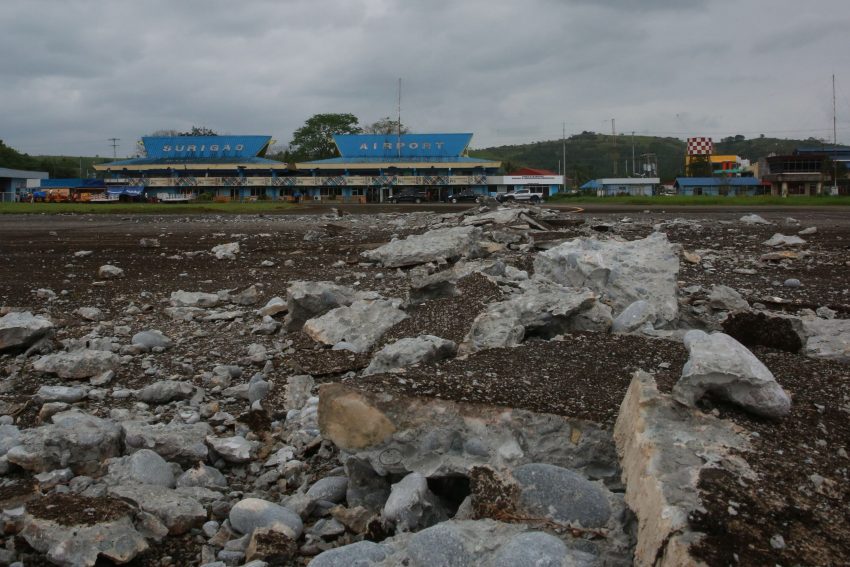 Surigao City airport was greatly damaged by magnitude 6.7 earthquake that hit Surigao Province on February 10, 2017. The damage prompted the airlines to divert the flights to Butuan City. (Rey Baniquet/Presidential Photo)

DAVAO CITY, Philippines – There are now eight fatalities in Surigao City after the 6.7 magnitude earthquake rocked the province of Surigao del Norte.

Mina Marasigan, spokesperson of the National Disaster Risk Reduction and Management Council said four of the fatalities are already confirmed by the Department of Interior and Local Government while the identification of the four remaining casualties are still being reconciled with the cause of death to be included in the official list.

Marasigan said the agency also recorded 1,034 damaged houses with 155 totally damaged. Meanwhile, the Department of Health already identified 140 out of the 202 injured.

Some of the patients are in and out of the hospitals because their cases are ambulatory, she said.

Classes in the city remain suspended.

The earthquake’s damage is also pegged at an estimate of P108.45 million cost of damage in infrastructure.

However, Marasigan said only 16 villages out of the 211 barangays are undergoing power restoration. Most areas, she said, are already fully-energized.

Marasigan added that the main problem they are facing is the lack of potable water.

She said they are providing five more units of water filtration systems including teams to augment the need for drinking water.

More shelter materials are also needed for those whose houses were damaged by the quake.

But Marasigan said there is no evacuation center since the residents opted to camp out just outside their damaged houses to watch over it.

Meanwhile, Renato Solidum, director of the Philippine Institute of Volcanology and Seismology said more than 151 aftershocks were recorded as of 10:00 am Monday.

Aside from Surigao del Norte, aftershocks also occurred in Dinagat and Southern Leyte.

“Those are also the areas which felt the stronger earthquake intensity last Friday,” he said in an interview at CNN Philippines.