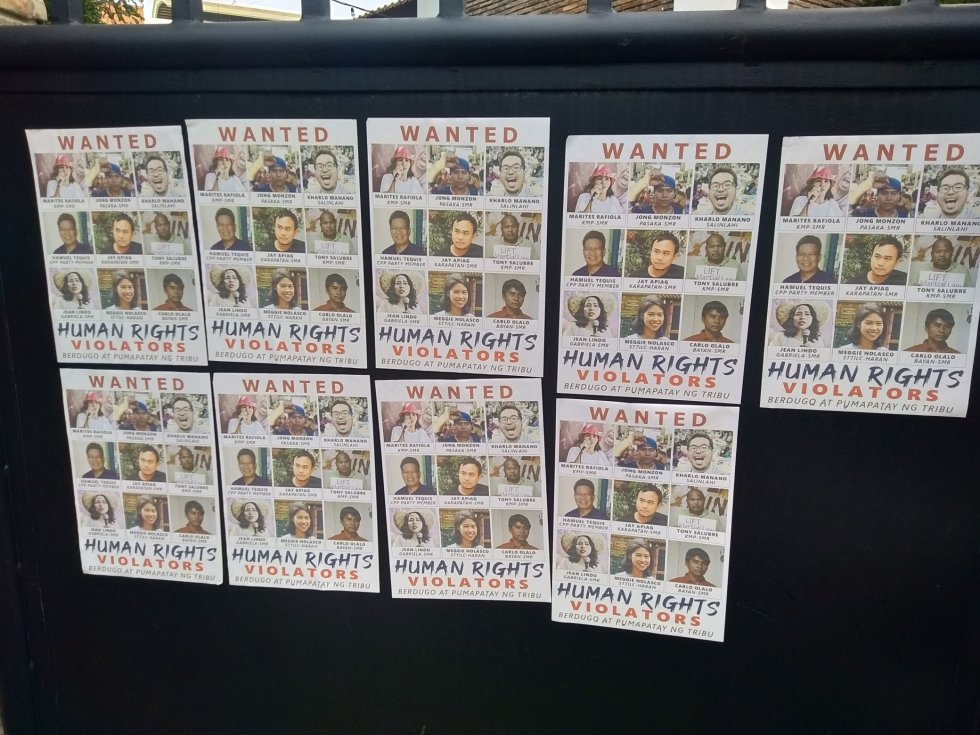 Another propaganda poster against rights defenders in Davao is spotted along the building of Sta. Ana Church, this time blatantly tagging UCCP Bishop Hamuel Tequis as a member of the Communist Party of the Philippines as well as Dr. Jean Lindo of Gabriela. (Photo courtesy of Gabriela-Southern Mindanao Region)

DAVAO CITY, Philippines – Another set of posters tagging activists and rights defenders as wanted terrorists circulated in Davao City Thursday, August 13, this time including a bishop, a doctor and a Lumad school administrator.

The posters which did not bear signatories were seen at the gate of Santa Ana Parish Church, a prominent church in the downtown area.

Tequis is the bishop of UCCP Southeast Mindanao area which manages UCCP Haran that is currently providing sanctuary to hundreds of Manobo Lumad displaced due to militarization in Talaingod, Kapalong and Arakan.

Tequis is blatantly tagged in the poster as a member of the Communist Party of the Philippines (CPP).

In several instances, UCCP Haran and bishops have been accused of holding on to the displaced Lumad from going back to their ancestral lands in order to make profits.

Nolasco has been subject to online harassment and is facing charges filed by police for alleged kidnapping of her Lumad students. Salugpongan school was accused as “rebel schools” by the anti-communist task force that led to its closure last year.

Salugpongan school is one of the petitioners to seek the Supreme Court to nullify the Anti-Terrorism Act.

Manano is also included since Salinlahi has joined campaigns in the past supporting the Lumad schools.

Dr. Jean Lindo, an anesthesiologist, faculty of Davao Medical School and a long-time practitioner of community medicine and health rights advocacy, assailed the circulation of the posters, and warned of possible attacks against her and on other leaders that appeared in the poster.

“This could be prelude to murder or to harassment suit if they are kinder and want to make me suffer through other means. I will still assert. But to those whom I care about I want you to know I do care about you enough to fight and resist,” Lindo said in a Facebook post.

This week, AnakPawis national chair and peace talks consultant Randall Echanis was murdered in his apartment in Novaliches.

Lindo’s group, Gabriela strongly condemned the continuing vilification of activists in Davao Region, and called for these attacks to stop.

Progressive groups raised alarm over similar posters last July and had filed a complaint before the Davao City Police and the regional office of the Commission on Human Rights (CHR) to investigate the incident.

Human rights group Karapatan earlier expressed concern how the passing of the Anti-Terrorism Law have emboldened elements behind this smear campaign against progressive leaders. (davaotoday.com)