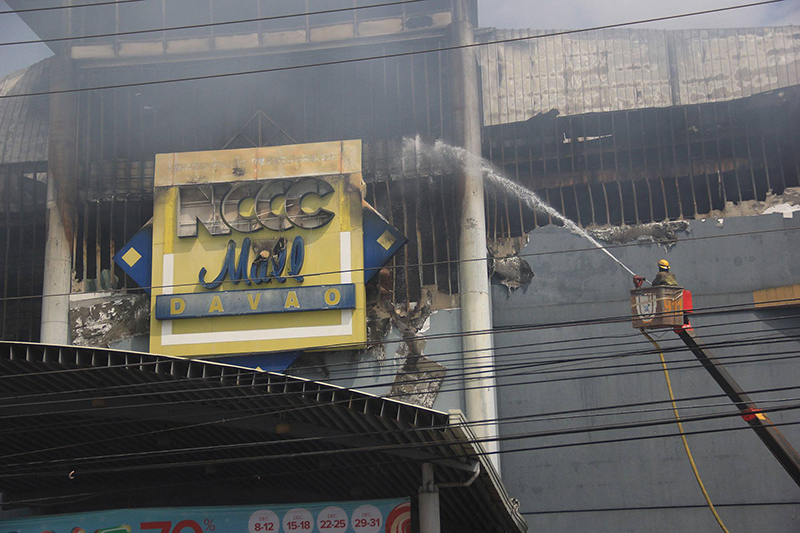 FIRE OUT. A firefighter sprays pressurized water onto a burning portion of NCCC Mall Davao. Authorities declared on December 24, 2017, that the fire in the mall has been put off. (Photo courtesy of the Breakaway Media)

DAVAO CITY, Philippines – The fire that tore down a local shopping mall here was totally put out on Sunday, December 24, after nearly 32 hours of firefighting, while a body of one of dozens missing was also recovered.

Davao Fire Marshal Honeyfritz Alagano said the Bureau of Fire Protection (BFP) Davao declared that the fire at NCCC Mall of Davao has been put off at 5:15 pm on Sunday, December 24.

Fire broke out in the third level of the mall at 9:30 am on Saturday, December 23. Firefighters dashed into the scene, and eventually sought help from neighboring cities as the fire eventually spewed plumes of dark smoke and flames.

Authorities also recovered a body of among those trapped inside the mall, said Alagano.

On Sunday, December 24, Mayor Sara Duterte-Carpio told relatives of the rest of the missing employees that “we are expecting 37 casualties.”

Earlier on that day, President Rodrigo Duterte broke out a sad news to the relatives: that there is zero chance of survival to those trapped inside.

Alagano said they are currently demolishing the building to make it easy for rescuers to recover the bodies trapped inside.

The management of NCCC Mall of Davao said they are “deeply affected by the fire that destroyed our mall and caused lives to be lost.”

“We have been in constant coordination with the BFP ever since the incident broke out,” it added. (with reports from Mick Basa / davaotoday.com)