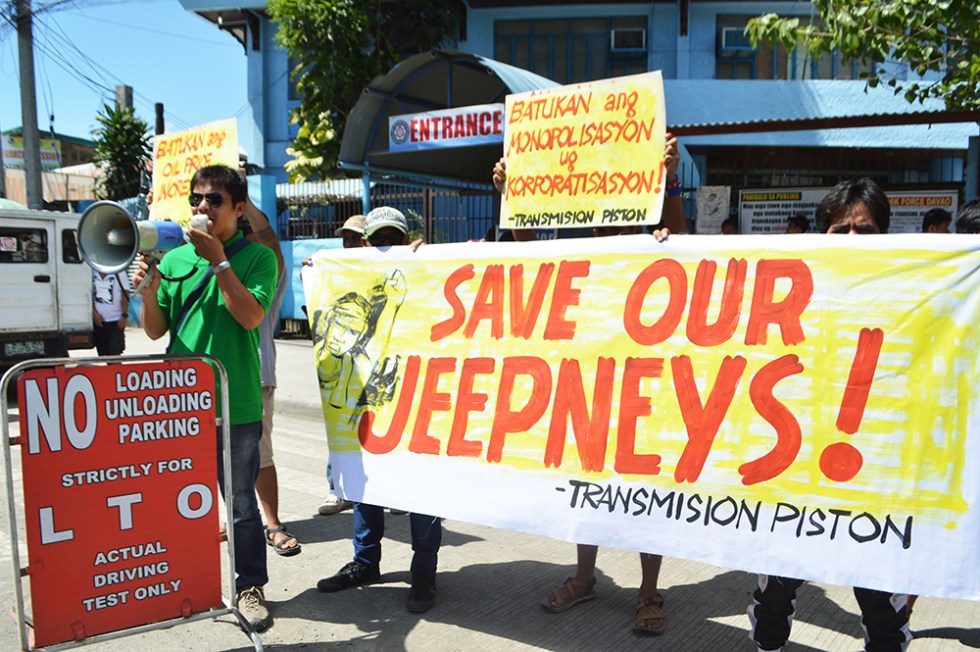 He starts plying the route of Jerome Village to R. Castillo street in Agdao District from 5 am to 7pm.

A good day would earn him P400. But in most cases, he said, his earnings would only reach P200 a day.

On Tuesday morning, December 5, Baron was at a protest rally with other drivers, mostly public utility jeepneys (PUJs) in front of the Land Transportation Office (LTO) regional office here.

Tricycle drivers like him are affected by the PUJ modernization program of the government.

“What will happen to jeepney drivers who will not be able to modernize their unit?” he said.

They worry they will no longer be allowed to ply outside the main highway along R. Castillo road.

Along R. Castillo, Baron shares the road with hundreds of other tricycle drivers traversing Holy Cross Agdao, San Juan Agdao, South Bay and Jerome Village. Jeepneys going to and from Sasa and buses from Davao del Norte also pass on the same road.

Like Baron, Dodong Francisco, 47, shared the same concern as they carried the banner that read: “Save Jeepney Drivers! No to Jeepney Phase Out!”

Their disapproval of the said phase out stems from a modernization program launched by the Department of Transportation (DOTr) in June.

The program is said to phase out old jeepneys with environment-friendly and efficient-driven mass transportation system.

In October, at the height of the transport strike launched by jeepney drivers and operators under the Pinagkaisang Samahan ng mga Tsuper at Operator (Piston), the President said gave an ultimatum to PUJ drivers: modernize or endure poverty and hunger.

In Davao City, Mayor Sara Duterte-Carpio said jeepney drivers could become the partners of the government in modernizing the transport system here by investing in the business or become bus drivers instead.

The city’s Transportation and Traffic Planning Committee is working with the Asian Development Bank (ADB) on the High Priority Bus System (HPBS) project.

But for Francisco, common jeepney drivers would not be able to afford the scheme.
For one, Francisco said he has no money to put into the business.

His rental fee for the jeepney unit he drives is more costly than what he earns at P600 daily.

He also said that not all jeepney drivers who will lose their jobs can become bus drivers.

“There are probably 10 jeepney drivers for every bus driver. Where will other drivers go?” he said.

LTO 11 Regional Director Gomer Dy recognized the concern of the PUJ drivers who fear of losing their livelihood.

With a bus carrying thrice as much as passengers compared to the capacity of a regular jeepney, Dy said a conflict can really be foreseen.

However, he emphasized that the government’s intention is but to “modernize the transport system” and make it globally competitive.

“The people deserve a modernize transport system that is operating smoothly, conveniently, and efficiently,” he said.
But still, both Baron and Francisco hope that the President would consider them in deciding over transport modernization.

“We voted for him, we were happy that a leader from Davao is now in Malacanang, but now we are disappointed,” Francisco said. (davaotoday.com)