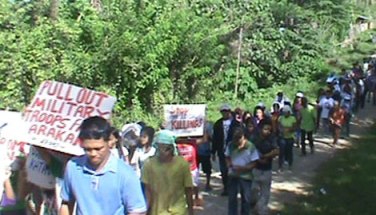 KIDAPAWAN CITY, Philippines — Farmers and rights advocates made the recent 25th year anniversary of the Mendiola Massacre an occasion to face the military and hold them accountable for the spate of rights abuses in the province.

Around 600 farmers belonging to the Arakan Progressive Peasant Organization (APPO) and church people trooped to the municipal gym to meet head on the Commanding Officer and spokesperson of the 57th Infantry Battalion (IB) and the 10th Special Forces (SF) of the Philippine Army.

The Mendiola massacre referred to the killing of 13 farmers during an anti-government demonstration on January 22, 1987 in Manila. Anti-riot teams from the Western Police District, Integrated National Police and Philippine Marines opened fire at some 10,000 protesters who were demanding genuine land reform from the Cory Aquino government. Aside from the 13 fatalities, 39 protesters sustained gunshot wounds while 20 suffered minor wounds. Six years later, the Supreme Court cleared the Aquino government, citing state immunity from suit. Until now, victims and their relatives were not indemnified and perpetrators were not punished. 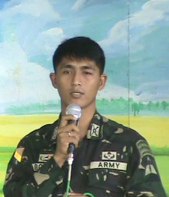 “It was a legitimate encounter. Hindi po kami makararating sa lugar na yon kung walay nagreport, na may mga armado na pinakikialaman ang kabuhayan ng mga magsasaka (Our troops would not have been there, had no one reported of the presence of armed men who were disrupting the livelihood of the farmers),” Lt. Frank Barol, 10th SF Commanding Officer, told the audience, referring to their October raid in Kabalantian village, Arakan town, where two other peasants, sitio (sub-village) leader Nolie Badol and Celso Batoy, were arrested. The latter were falsely charged of harboring explosives and firearms, and are currently detained at the North Cotabato Provincial Jail.

“When the soldiers arrived and went to our house, my husband thwarted them. Angered, one of the soldiers hit him in the thigh with the rifle’s butt. Ramon then grabbed his bolo and struck the soldier at his neck,” said Gina Batoy, wife of slain peasant leader Ramon Batoy.

Two other soldiers, who were standing near their house that moment, immediately peppered him with bullets from their high-powered rifles. He was able to run and struck the arm of another soldier with his bolo before he slumped on the ground, dead. As Gina and her kids ran for safety, the military fired at them.

Residents said government troops hung a high-powered rifle on Batoy’s body and took a photo of him to show that he was an NPA (New People’s Army) guerilla. The military also took pictures of all the men in the area. Batoy’s body — covered only with a banana leaf — was transported to the adjacent village through a kanga, a makeshift cart pulled by a carabao.

On that same day, the soldiers took Nolie Badol, 35, outside the sitio’s primary school and there, tied his legs and hands. He was mauled and was repeatedly hit with the butt of a rifle. His wife, Evelyn Badol, 32, their children and relatives repeatedly appealed for the soldiers to stop. “I and my children wanted to go near my husband but even my kids were not spared. They still fired at us, three times! What did the children do to them? Why did they have to fire at my kids? They only wanted to save their father,” she said.

Celso Batoy, 47, Ramon Batoy’s uncle, was also mauled. He and Badol were brought to the military detachment and detained for a day before they were turned over to the police.

No records, no papers, no documentation

As the events were retold during the January 20 forum, Gina Batoy again faced the military. To her dismay and the other participants, Arakan PNP Chief Inspector Jeofrey Todeño claimed to have no knowledge of the abuses, nor were there papers or affidavits endorsed to him by his predecessor.

But last October 23, families of the victims reported the gruesome incident to the police which was then headed by Senior Inspector Benjamin Rioflorida, claims Hanimay Suazo, secretary general of human rights group Karapatan. “Todeño is clearly washing his hands over this case. He’s newly installed and clearly doesn’t want to be dismissed like Rioflorida,” she said. Rioflorida, along with businessman William Buenaflor, were implicated in the murder of Father Tentorio, in a sworn statement of alleged gunman, Jimmy Ato.

The same haphazard, if not, lack of serious work to put the wheels of justice, was also noted, on the part of government officials, said PCPR’s Estrella. Jun Lubiano, representative of Arakan parish team pointed out of unwarranted entry into the parish and the police arrest of men carrying arms prior to Father Tentorio’s killing — details which the current Arakan police chief claimed to have no knowledge of.

“The police is not serious in serving justice to Father Pops,” Pedro Arnado, chair of Kilusang Magbubukid ng Pilipinas (KMP) in Southern Mindanao, said. He added the police have no data and proper documentation with respect to their investigation on Father Pops’ case, “they have taken no concrete investigation.”

“The problem with the police in Arakan is that they don’t record the complaints filed in their office,” Suazo said. Complaints filed by Father Tentorio prior to his death were not on police records.

Father Tentorio’s killing was linked to his life-long work with peasants and Lumads, advocates say.

As justice is close to nil, the plight of peasants in Arakan has worsened, claims Anacleto. Just this month, soldiers searched some 40 houses and profiled as communist supporters the peasants in the villages of Kabalantian, Kibasalan, Sto. Nino and Salasang.

“The ongoing militarization in the countryside, hidden under AFP’s peace and development program, puts the lives of poor peasants in danger and their means of livelihood in uncertainty,” KMP’s Arnado said.

As officials took turns to claim that they were not properly informed of the abuses, farmers, meanwhile, urged for the withdrawal of military troops in Arakan. While leaders at the panel during the multi-sectoral peace forum scored the AFP’s counter-insurgency activities, farmers displayed placards condemning the Oplan Bayanihan, and calling for the pull-out of AFP troops in Arakan.

During the forum, Jessie Enid, representative of Governor Lala Talino, singled out the military’s use of barangay halls and daycare centers, to which Lt. Col. Barol and 57th IB spokesperson 1st Lt. Noel Gatus were quick to acknowledge. Enid also scored the military for wearing civilian clothes during military operations.

Suazo said the military is present in almost all villages in Arakan. “They stay in primary schools,” she said.

Lt. Gatus of the 57th IB claims that their operations were requested by barangay captains. But according to Suazo, “That’s a lie! They would have to prove that claim. They just say that to justify their presence in the villages.”

Farmers elsewhere in the region are also restive, and marked the 25th year anniversary of the Mendiola Massacre as an occasion to call for justice for peasants–47 as of last count– who were victims of extrajudicial killings.

North Cotabato PCPR secretary general Estrella said, “President Aquino should do the right thing, give justice to the victims of the state’s fascism. Otherwise, he is perpetrating the same injustice committed by his mother 25 years ago.” (Marilou Aguirre-Tuburan/davaotoday.com)