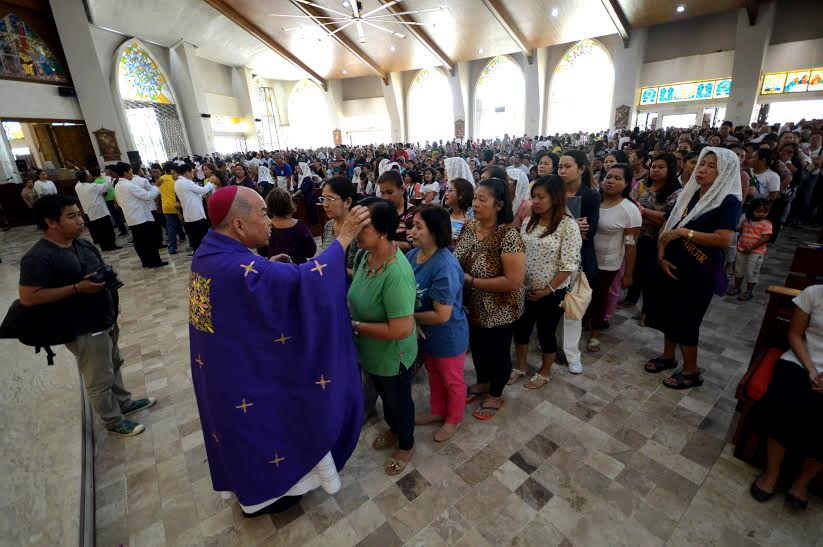 FILE PHOTO. Churchgoers in Davao City are prohibited to bring backpacks,knapsacks, boxes and alike inside churches for “security reasons” after the bombing of a Roman Catholic church in Jolo, Sulu on January 27.

DAVAO CITY, Philippines – After the twin bombings that hit inside a church in Jolo, Sulu last Sunday, the City Government of Davao has banned the public for bringing backpacks inside the churches.

Public Safety and Security Command Center head, Benito de Leon, said the Mayor Sara Duterte ordered a “No Backpack policy” in all places of worship in the city for security reasons.

“In that manner, we could avoid an incident, wherein some malicious individuals could put in explosive devices in backpacks, the same scheme that happened in Jolo,” de Leon said.

Churchgoers are instead advised to bring small handbags or purses so that “security forces could easily monitor suspicious activities more efficiently.”

Davao Archbishop Romulo Valles has also issued an advisory to all priests through Circular No. 03 on Tuesday.

“Brothers and sisters, due to the current peace and order situation vis-a-vis threat of violence, please be informed that starting today (January 29), for all churchgoers, it is not allowed to bring with you bags, backpacks, knapsacks, boxes, cartons, and the like into the church. Only small purses and the like are allowed. Please be guided,” it read.

However, in cases where churchgoers would bring big bags, De Leon, requested the public to submit themselves for inspection by local security forces.

Ryan De Leon, Lector and Youth coordinator of St. Francis of Assisi Parish in Maa, said it would be inconvenient not to bring backpack since he needed to bring his vestment and other personal belongings each time he goes to church.

(“As a churchgoer and server, I have my vestment and other personal belongings that are more convenient and organize if these are put in a backpack. But this is for our safety because most of the bombs were placed inside a backpack so I need to obey.”)

He, however, expressed hope that security forces would tighten the inspection of vehicles going in and out of church premises, fearing that bombers would still find other way aside from using bags.

Promotion of Church People’s Response (PCPR) Southern Mindanao spokesperson Bro. Ronald Balgado said they recognized the need to be vigilant in the recent incidents of violence in the country. But he reiterated that it would be inconvenient for churchgoers especially the workers or employees.

“People come to churches after work or school and where would they leave their belongings. To some extent, this is what Martial Law have done to many people. People are being checked and had been always susceptible to such agony because of fear. Would it be insensitive to the feelings and needs of the people?” said Balgado.

“The atrocities happening around us today must be faced with bravery not fear. We must not pave fear to be instilled in our people but boldness to continue ask for truth and accountability in the crisis happening here in Mindanao. Lastly, we had to continue find ways to sow genuine peace in our land through dialogue and healing. The Church must be challenged to do more in this area,” Balgado he added. (davaotoday.com)