DAVAO CITY, Philippines – The holiday in commemoration of the 154th birth anniversary of the father of Philippine revolution became a show of force from two opposing sides.

A large portion of the Roxas Avenue here on Thursday, November 30, were filled with three different groups, two of them were supporters of President Rodrigo Duterte, while the other group just across the street were opposing what they call is Duterte’s “creeping tyranny.” 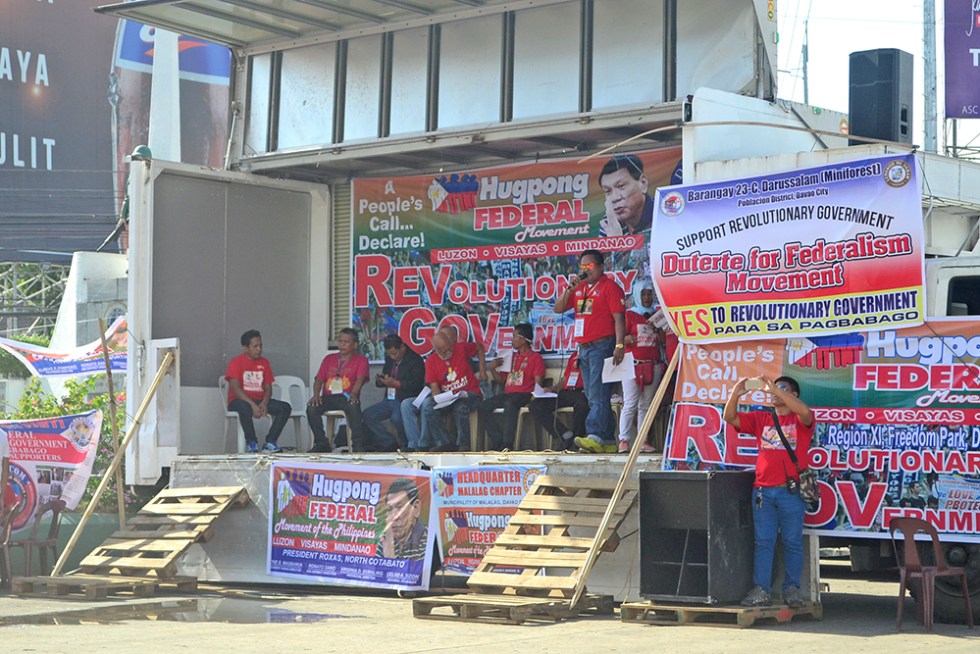 The rally was scheduled from 1pm to 12 midnight.

Their other group, composed of a much larger crowd, gathered at the Crocodile Park.

Meanwhile, in front of the Red Cross Office in Roxas Avenue was a simpler space for another pro-Duterte group. A giant black sound box was placed in front, with two Philippine flags on each side of a banner of an alliance called “Tama”, a portmanteau for tapang (courage) and malasakit (concern).

“Duterte Kami!” (we are for Duterte), their banner reads.

They were joined by the Bishops of the Philippines and Chaplains, Ministry of Charity Baptist Church for National Concern, Jesus Reigns, Guardians National and 16 other civic and religious groups. 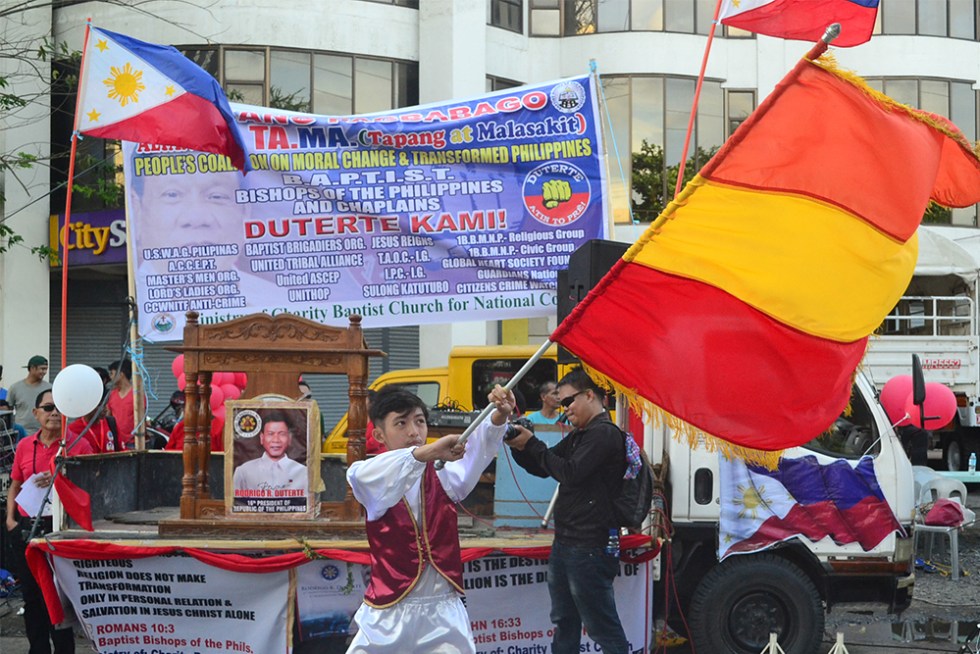 While strikingly similar to another group called Tapang at Malasakit, the alliance said both are groups of their own.

Jefry Tupas, convener of the Tapang at Malasakit Alliance, clarified that the group is different from the alliance that was launched at the Bonifacio Global City in Taguig City last October 23.

Many of the supporters were rallying in support for a revolutionary government. But pro-Duterte rallyists gave out different views about it.

Marissa Deculawan, 54, was among the crowd in front of the postal office. She has been supporting Duterte since the time of the presidential campaign period last year.

As her show of support, she travelled for five hours from New Bataan town in Compostela Valley Province to be here.

However, when she was asked why she supports the push for a Revolutionary Government, Deculawan cited the time when former President Corazon Aquino ruled under a so-called “Freedom Constitution.”

“Similar to what President Cory did then, President Duterte wants to abolish Congress and Senate and start anew,” she said in vernacular.
Meanwhile, Corsino Terec, District 1 coordinator of Hugpong Federal in Compostela Valley said it’s their understanding that if the federal setup of government is not possible, the President has another option. 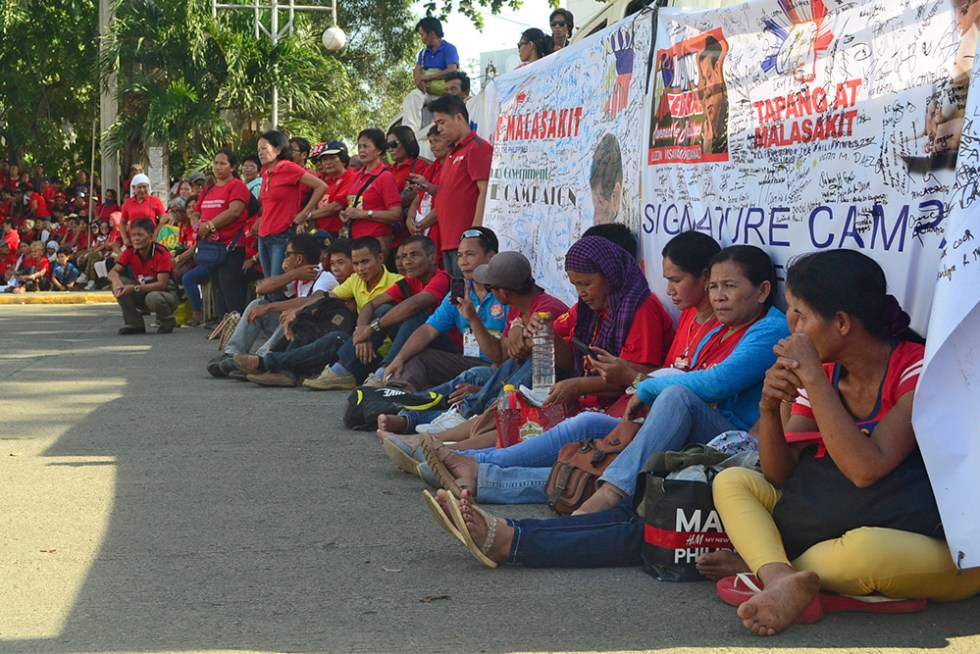 By option, Terec meant that the President can establish a revolutionary government, a plan which he fully supports.

“If the federal system will not be pushed, it’s better to have a revgov to immediately replace those who are corrupt,” he said.

He said their gathering today would show the critics of President Duterte that he has a large number of supporters who paid for their trucks and brought their own food to join the gathering.

Each delegate, he said, paid P100 each for their contribution for the fuel. He said there were at least 300 individuals who joined from his district coming from the municipalities of Monkayo, Montevista, Compostela, New Bataan and Maragusan.

A member of the Hugpong Federal Movement from Matalam in North Cotabato, who requested not to be quoted, said establishing a revolutionary government is the easy way in shifting to a federal form of government.

But progressive groups on the other side of Roxas avenue also put up a stage with a much larger banner with the message that called the public to oppose the fascism of the “US-Duterte regime.”

Youth activists under Anakbayan even wore Katipunero costumes as they march more than two kilometers from Magsaysay Park to Freedom Park.
Anakbayan Southern Mindanao region spokesman Chris Deslate, 20, said they worry that if Duterte would push through with the revolutionary government, they could no longer exercise their right to air out their grievances. 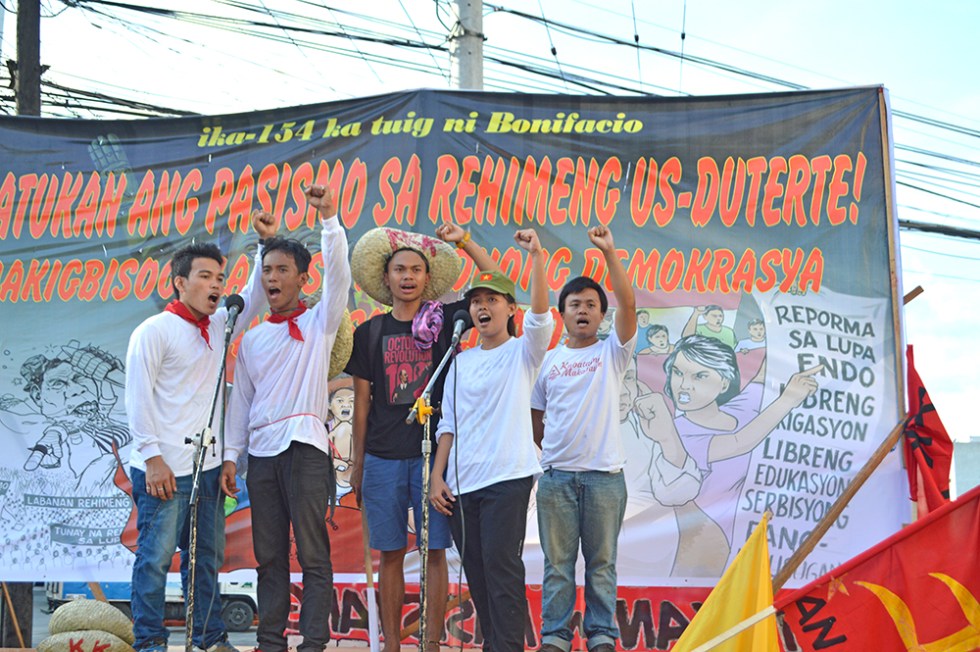 “Now that we are under Martial Law, the people’s rights are being curtailed, how much more if the Congress and Senate are abolished and Duterte gets full control of the government?” he said.

“The situation of human rights violation has worsened under the administration of President Duterte when he declared Martial Law in Mindanao and after his recent termination of the peace talks with communists,” said Mary Ann Sapar, secretary general of Gabriela.

Sapar said the latest of the attacks against activists was the killing of Elisa Badayos and two other members of a fact-finding team investigating human rights abuses in Negros Oriental who were killed by still unidentified attackers on November 28.

Sapar said they have already documented 17 women killed by suspected state forces under the Duterte administration.

In Davao City, she said, the killing of Anakpawis Partylist member Apolonio Maranan last November 25, came following the announcement of the president that the government will also come after the “legal fronts” of the communists under the umbrella organization Bagong Alyansang Makabayan (Bayan). 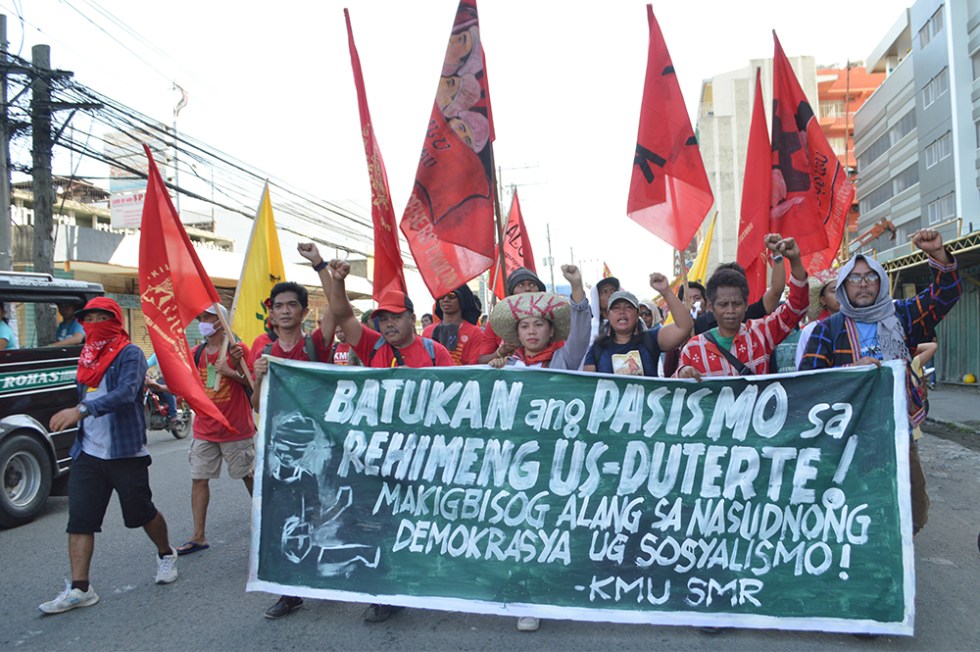 They were disappointed with Duterte’s failed promises of change.

“He said there will be genuine change, he said he will push for an independent foreign policy, but now he has welcomed the US as a friend,” she said.

Sapar said Duterte’s version of a revolutionary government only seeks to “deceive the people.” (with reports from Robby Joy D. Salveron/davaotoday.com)