One Billion Rising in UP 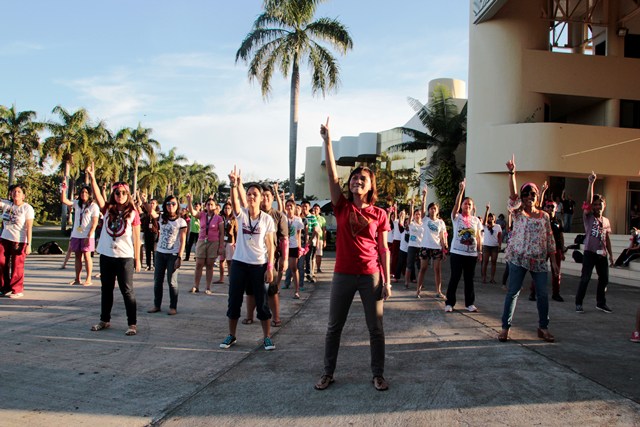 UP MINDANAO REHEARSES FOR OBR. Students and faculty of University of the Philippines Mindanao stage a rehearsal for the worldwide campaign of One Billion Rising Against Injustice set this February 14, where millions will staged dances in advocating an end to impunity and social injustice to women and children worldwide. (Earl O. Condeza/ davaotoday.com)

DAVAO CITY – Some 100 activists from the University of the Philippines (UP) Mindanao campus staged a campus dance Wednesday that was a prelude to the forthcoming One Billion Rising comes February 14.

Dubbed as “campus rising,” members of militant student organizations, faculty and the Lesbians, Gay, Bisexual and Transgender community, simulated the One Billion Rising to give attention to women, students, and the injustice against disaster victims.

One Billion Rising was a global campaign against violence against women which was launched in over a hundred countries.

“As the youth arm of Gabriela in UP Mindanao, we rise for Justice. Justice for the victims of typhoon Yolanda, environment plunder, and for our right to education,” spokesperson Keziah Suzane Francisco said.

Kairos Anggadol, president of Mentefuwaley, LGBT group of UP Mindanao, said they took part because their group is also “vulnerable to abuses and discrimination.”

Anthropology Professor Malaya Andrea Ragrario who also took part, said that the fight on violence against women is not just their fight, but everybody’s fight.

She added that “a society where women are not free is not a free society.”

In the activity, participants chanted “Education, a human right!” before and after every speech.

Arian Ramos, president of Alyansa ng mga Aktibong Kabataan sa UP Mindanao (Anak UPMin) said that “there are a lot of issues to be considered in education” and thus there is “need to rise for it.”

Ramos pointed out that the Socialized Tuition Fee Assistance Program (STFAP) of UP is a “smokescreen for tuition fee increase.”

STFAP is UP’s scheme to categorize students to the amount of tuition he/she pays according to his/her family’s assets and liabilities, wherein “rich” students pays P1000/unit and the “poor” ones pays nothing and are given with stipend.

Ramos said that “Everybody deserves accessible or free education that’s why we fought this scheme to be scrapped not only in the campus but also in all other campuses of UP.”

“STFAP is an anti-student scheme since one needs to prove first that he or she is poor before availing this program. This violates our Constitution because every student is guaranteed with free and accessible education,” she added.

Ramos said that the “campus rise” will not just end in the campus but will be part of the bigger One Billion Rising in Davao City this coming February 2014. (Earl O. Condeza/davaotoday.com)