We Who Seek to Settle: Part 2 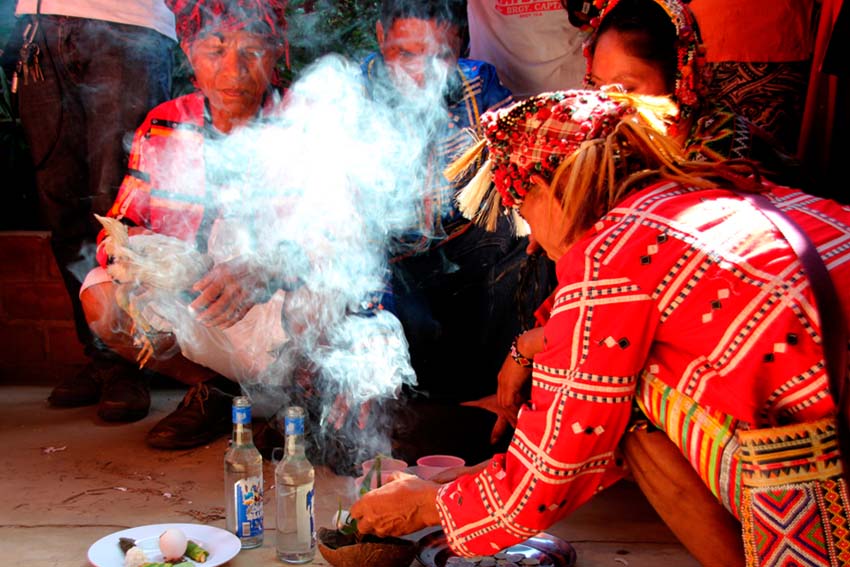 Indigenous peoples’ leaders perform a ritual for the gods to protect them and support them in their struggles. (File photo)

And so, the Settlers’ encroachment continues.

The often kitschy, (dare I say) tourism-oriented localization of the Filipino narrative – or Filipinization of the local discourse –means the local discursive narrative when discussing all matters Mindanao invariably becomes that of the Settlers’ voice, silencing the Lumad and Moro perspectives. To the National and International audiences, Mindanao is bajo de la campana, save for a few mountain savages and Muslim outlaws.

The same is true, of course, in the telling of local history, even in the rare occasion that Settlers tell it to their own peoples. The writer Aida Rivera Ford is the most prominent voice of the orthodox view that Oyangguren established Davao, dismissing Bago as a local savage leader who simply frustrated the bringing of civilization. In Kidapawan, the Manobo history of the area is almost completely lost now, with Kidapawan’s foundation attributed to the Commonwealth government. More sinisterly, violence against the Lumad and Moro (including in North Cotabato, where Katindu and Manili played out) is relatively unheard of and almost forgotten even by the locals of the places whereon they happened.

And this continues in culture and public discourse today. Novelist Rogelio Braga coined the term “Settlerjacking” to describe this phenomenon. He cited in particular the cultural role played by the song “Cotabato” by the band Asin in the Filipino understanding of Mindanao. The song describes a war-torn Cotabato, and is sang in the first person, “someone born in a town in Cotabato.” Braga argues that the band has hijacked the Moro voice by claiming to speak about the Moro struggles from the victimized (Moro) perspective. “For a long time,” he argues “Filipinos embraced ‘Cotabato’ and songs like it as legitimate telling of the Mindanao narrative.” The band’s leader, Cesar Bañares Jr., is from Koronadal, South Cotabato, and here I add to Braga by speculating that the band capitalized on this origin, even if South Cotabato – named so as a historical component of the vast empire province of Cotabato – is historically a T’boli and B’laan domain and today is largely Ilonggo in demographic, not to mention the most peaceful of Region 12’s provinces (Koronadal, in fact, serving as the Regional capital because of its relative stability). The song only ends up reinforcing the stereotype of Moro lawlessness, “the violent Muslims,” and only confounds the word “Cotabato” (a place name with a complicated history and very broad usage) inaccurately with “Muslim country.”

Admittedly, I have been guilty of this. In response to criticism from Manila on Duterte’s declaration of Martial Law in Mindanao following the Maute siege of Marawi, I wrote an article entitled “Why people in Mindanao don’t mind Martial Law.”  Invariably the perspective was from a Settler’s, although I wrote it as if it spoke for all in Mindanao, even while Martial Law for many means stronger state encroachment into Moro space.

Part of the impetus underlying Settlerjacking is the Settlers’ patronizing sense of stewardship, an impulse that is a direct result of the Settlements’ colonial Catholic histories. Like all Imperialistic peoples, we Settlers envision ourselves as the better off “big brothers” of the Lumad and Moros, the more privileged, more educated, more civilized benevolent superiors whose elect duty it is to reach out to the “less fortunate” Lumad and Moro “brothers and sisters,” to speak on their behalf in their inability to speak for themselves. At its crudest it is the impulse to baptize the infieles into the One True Faith, the urge to wash them of their “indigent” primitiveness, that they may be “properly introduced into civilization.” It is certainly how Spanish and American colonial education has and continues to work, especially in basic education, here in Mindanao, where the son of the Arumanen Talaulahingan is considered illiterate and has to be taught English so he can at least try to read Shakespeare.

Over the decades this sense of stewardship has become more nuanced, informed by Marxism and post-colonial sensitivities, and yet it continues to be fundamentally patronizing in nature. To its credit it has led to concrete triumphs for the Lumad and the Moro. The government, for instance, actively sought to resolve the Katindu dispute, with the local government of Magpet doing much to help support Mambiling and his people. The local diocese of Kidapawan also exerted effort to push the Manobo cause, and today the Bishop’s palace in Balindog is also where the Lumad Mindanao Peoples’ Conference headquarters is. But all this help is still predicated largely by the assumption that the Lumad and the Moro are weak peoples that have to be helped. And the crime of cultural assimilation – of which the Catholic Church is still guilty of orchestrating – remains unspoken of, almost taboo as a topic.

I and Asin are guilty of Settlerjacking, but Asin is also guilty of an even more serious form of cultural encroachment: Appropriation.

Koronadal, Bañares’ hometown, is one of Paulino Santos’ settlements in South Cotabato, one which GenSan literally carved out of the empty cogon plains. As a settlement with a short history, Koronadal fills in the cultural void by hosting showcases of the culture of the T’boli and their T’nalak cloth, with South Cotabato’s annual T’nalak Festival being held there every year. The T’boli are in fact concentrated in Lake Sebu (another municipality about an hour’s drive away) and none of the actual dreamweaving takes place in Ilonggo Koronadal.

Claiming the culture of the Lumad and Moro as their own is another means by which Settlers cope with their empty identities.

At its worst you get people of no Lumad or Moro heritage claiming to be Lumad or Moro. Most frequently, however, it occurs in the form of appropriating the arts. In Mindanao you will find an Ilonggo fictionist writing what are being presented as Manobo or Magindanaw novels, a Cebuano fashion designer using T’nalak and Inabal to make “Lumad fashion,” a Tagalog musician using Mandaya instruments to make neo-Lumad music.” Bizarrely, the urge to appropriate has bled into some Moros, with one artist from Cotabato claiming to make “Lumad sculptures.”

Whereas Settlerjacking only silences Lumad and Moro narratives in the discourse of the Filipino nation, appropriation serves to rob them of their autonomy and agency to define their own cultures, and at worst is downright identity theft. It paves the way for exoticism, and thereby to cultural objectification.

In the Philippine literary canon this means the bulk of what has been more progressively labelled “Lumad” or “Moro texts” continue, in fact, to be objectifying works about the Lumad or Moro by Settler writers, regardless of authorial intent. Leoncio Deriada’s work, for instance – textbook staples like “Daba-Daba” and “Dam,” or the full length play “Ulahingan:Rudsuan” – are still being introduced to students by asinine college teachers as actual Lumad text. It is symptomatic of the severity of the Appropriation that emerging authentic texts – the work of the Higaonon novelist Telesforo Sungkit or the recent anthology of young Moro writers edited by Teng Mangansakan to cite just a few examples – have to contend for the label of “Lumad” or “Moro” against settler-written literature in the canon.

What is ironic about Appropriation is that it can only be committed by the Settlers who understand the cultural community they are appropriating (Settlers certainly not guilty of the willful ignorance against which Mambiling waged his Pangayaw), and who by all means may have the best intentions. But the danger with speaking for the subaltern is that one invariably ends up projecting one’s own perspective as that of the subaltern – the subaltern are so precisely because we do not let them speak.

With the case of the Mindanao settler, this assumed “authentic voice” is used to fill the still gaping void that defines Settler identity. (davaotoday.com)