Sendong victims want a home of their own 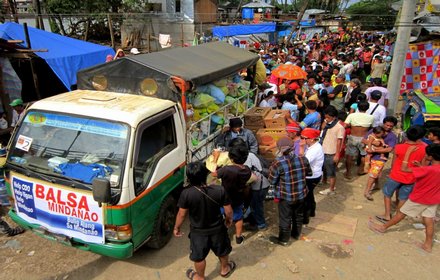 A month after Typhoon Sendong swept away homes, killed thousands and dislocated tens of thousands in Northern Mindanao, survivors plea for decent relocation.  Alas, no solutions are forthcoming.

CAGAYAN DE ORO CITY, Philippines — “All we wanted is a home of our own,” newly married Melody Ann Abarabar, 20, said while fixing their 5×7 feet makeshift tent in Tibasak, Barangay Macasandig.

Abarabar is among the 87,485 survivors of the deadly Typhoon Sendong which swept the entire riverbank community in Kalakala River last December 16.  Temporarily cramped in a tiny tent, Abarabar pines for the day when she and her husband would finally live on a relocation site earlier promised by local authorities to evacuees like them.

Decent houses are much needed by residents affected with the flash floods brought by typhoon Sendong.  It was that badly needed, that a father of three committed suicide when his family was not included in the first batch to be relocated in the Tent City, a relocation area provided by the local government in Sitio (sub-village) Calaanan, Barangay Canitoan, this city.

Calaanan, a sitio about 15 kilometers from downtown Cagayan, was, however, “flood-prone,” Edgar Dogalario, 50, told Davao Today.  “We really wanted a safe place,” he said.

More than 400 donated shelter box tents that serve as temporary shelters for the evacuees are currently propped up in the three-hectare relocation site provided by the local government.  These tents — complete with cooking utilities, purified water, water containers, water purifier tablets, mosquito nets and blankets — can accommodate a family of 10.

“The problem with Calaanan, as what my friends who live there told me, is that it’s landslide-prone.  It’s a dangerous place especially if heavy rains pour and floods occur,” Sesenio Gultiano, 58, told Davao Today.

“Gawas ana, ang among panginabuhian layo na gikan sa syudad,” (Aside from that, our livelihood is far from the downtown area) he added.

“The people are not interested in transferring there (Calaanan) because it’s far from their livelihood and there are no schools, markets and facilities within the vicinity,” Francisco Pagayaman, Secretary General of the urban poor group Kalipunan ng Damayang Mahihirap (Kadamay)-Northern Mindanao said.  “Many have been wanting to transfer but not in Calaanan,” he added.

Kadamay scored city Mayor Vicente ‘Dongkoy’ Emano for ignoring the inhuman conditions of the evacuees and the urban poor.  Pagayaman said “Emano has no concrete program for the urban poor settlers.”

He added that what happened in the city “should serve as a wake-up call to the government to address the demands of the urban poor.”

The affected people need immediate financial assistance, Pagayaman said, “so they can buy what they need.”  So far, nobody has given cash assistance to the typhoon victims.  “They also need, more than anything else, a long-term assistance, that is, housing, in a safe and secure place,” he said.

Abarabar, one of the evacuees, used to work as a saleslady before the flashfloods.  They were able to save nothing, not even their personal documents.  Her husband, who works as a welder in one of the biggest malls in the city, would have to strive to sustain their needs.  But he only earns about PhP 160-200 a day.  Her PhP 130 daily income as a saleslady could have, at least, made them breathe easier in these times.

For Dogalario, a house is what his family needs more than anything else.  While he is very thankful that they have been receiving help through relief missions, having a home of their own in a safer place is way much better.

Dogalario has six children.  His daily income of PhP 150-300 from vending fruits is not enough to sustain their needs.  His wife does not have a stable job and while most of his children are capable of working, they only get contractual jobs.

“The government has only focused in providing us aid.  But it has not looked into our real situation,” Dogalario said.  His family temporarily lives in a makeshift tent — relatively bigger than the Abarabar’s — beside the covered court in Tibasak.

Another evacuee, Roy Navarro, 33, suffered trauma and depression after the tragedy that befell his family and the city.  Their non-inclusion in the list to be relocated aggravated his condition and led him to commit suicide in City Central Elementary School, January 6.

While many wanted to transfer in a safer area, Feliza Pabellaran, 63, asked for enough assistance to repair her family’s house that was partially damaged.

“I don’t want to stay long in the evacuation center,” she said.  Her family lives in Tambo, Macasandig and has stayed in City Central Elementary School after the tragic incident.  All of their nine cows died and were swept away by the flash flood.  Nothing was left in their belongings saved for a few plates.

“Financial assistance is what we need most so we can buy materials for our house.  We will immediately return (to our house) once it’s fixed,” she said.  Her family has no plans of relocating.

Like Pabellaran, Gultiano  also asked for financial assistance.  His house was swept by the flashflood. “Mas maayo unta nga makatukod mig pabarug balik sa among panimalay gyud.  Ang pinakakinahanglan gyud namo, ang kabalhinan; ug mahimo ang pinuy-anan gyud namo, kanang naa mi katulgan ug kahigda-an,” (It would have been better if we’ll be able to rebuild our house.  The thing we need most right now is relocation and if possible, a house where we can sleep and rest) he said.

Gultiano, is a motorela (tricycle) driver.  He has five children, three are already married.  Only two of his kids are currently living with him.  Nothing was left in their belongings.  Even the tricycle he’s been renting was also swept away.  His net income of PhP 300-400 in driving part-time could have helped his family. “Ambot unsaon ni karon pagbangon,” (I don’t know how we can rise above this situation) he said.  (Marilou Aguirre-Tuburan/davaotoday.com)