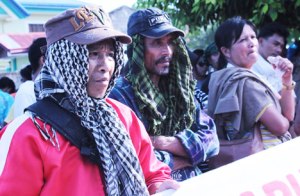 PANTUKAN, Compostela Valley, Philippines — “The no habitation policy and the entry of Russell-St. Augustine have posed threats to small-scale miners and other residents in Pantukan.  We are urging the local government to make Russel-St. Augustine leave.  Otherwise, blood will spill here,” Omar Gudo, chairman of the Federation of Small-Scale Miners of Compostela Valley (FSSMCV), warned.

“We are challenging the local government to support us instead of these big, foreign capitalists who only cause bigger trouble,” Gudo said.

The no-habitation policy was implemented by both local and national governments through the Department of Interior and Local Government (DILG) following the tragic January landslide that killed 40 individuals, including women and children.  Small-scale miners here were blamed on the incident.

The contingents came mostly from the villages of Diat 1 to 3, Panganason, Gumayan, Boringot and Post 4.  Contingents from adjacent municipalities and nearby cities also supported the activity.

They set up tents along the main road fronting the office of US and Canadian-owned Russell Mines and Minerals Incorporated (RMMI)-St. Augustine in Kingking village, defying orders by the local government to hold their protest action in Freedom Park.  They burned an effigy — a bulldozer labeled “Russel Mining and Minerals Inc.  Do not delay government project” — symbolizing foreign large-scale mining companies.  They threw rotten tomatoes against a US flag to signify their indignation.
According to the Save Pantukan Alliance (SPA), the Aquino government has allowed the RMMI to conduct its exploration in Pantukan town, foreshadowing the firm’s “destructive” open pit mining operations.

“President Aquino has ordered the no-habitation policy in the mountains of Pantukan to pave the way for these big and foreign mining companies, ultimately ignoring the interests and welfare of the small-scale miners and peasants,” Belen Galleto, SPA spokesperson, said.

Galleto scored the Aquino government and RMMI for “conspiring” to evict local residents who eke out an existence out of farming and small-scale mining.

But St. Augustine Gold Copper, a subsidiary of RMMI, claimed they did not conspire, and have done nothing to influence the no-habitation policy in this gold rush town.

Jonathan Bañez, team leader of the community development and political affairs department of St. Augustine Services Inc., quoted in a news report, “The company was still validating and piling up its baseline data of the previous exploratory drillings of the Eco-Bay Mines, which was the former technical partner of Nadecor (Nationwide Development Corporation).”

He furthered, the landslide-hit area which small-scale miners claimed is being operated by large-scale mining companies was not entirely within the 1,500-hectare Mineral Production Sharing Agreement (MPSA).  He said it is already part of another mining company, the Napnapan Mineral Resources.

The RMMI acquired the MPSA of Nadecor covering 1,656 hectares in Sitio Upper Lumanggang and Binutaan in this town.  The King-king MPSA is a conversion of mining leases covering 184 mining claims owned by Nadecor.

The camp-out contingents trooped to the Sanguniang Bayan (SB) to dialogue with its members and Pantukan Mayor Tok Sarenas.  Representatives from the FSSMCV and other community leaders urged the mayor and the SB members to support their 10-point agenda which they already presented to DILG Secretary Jesse Robredo last March 8.

The 10-point agenda include the prevention of the renewal of exploration permit of RMMI; cancellation of MPSA for all foreign mining corporations; amendment of the no-habitation ordinance; lifting of the DILG memo ordering the displacement or relocation of small-scale miners and other entrepreneurs; provision of technical assistance, risk and disaster preparedness and training, and livelihood assistance; support for the application for Minahang Bayan and lifting of the temporary restraining order preventing the issuance of environmental compliance certificate to small-scale miners; pull-out of military troops providing defense to large-scale and foreign mining companies; scrapping of the Philippine Mining Act of 1995; passage of People’s Mining Bill; and passage of Genuine Agrarian Reform Bill.

The protesters also trooped to the AFP’s 71st Infantry Battalion headquarters.  They scored this military unit for “serving as the private army” of the RMMI.

But government troops placed their sound system at the gates and played sounds in high volume — a move that only shows the military is “very rude,” according to the SPA.

Galleto said leaders from organizations against large-scale mining were harassed by soldiers from the 71st IB.  They also condemned the unit’s alleged human rights abuses especially against residents in Tibagon village.

“They (military) said they already have a list of individuals who are NPA (New People’s Army) members.  They accused me and my co-teacher Maricel of teaching this so-called ‘arak’ to our pupils instead of teaching vowels and consonants,” Pre-school teacher Marialou Lambo, one of the human rights victims, shared.

The 23-year old Lambo, who teaches in a school owned by the religious Rural Missionaries of the Philippines, asked the military headed by a certain Sgt. Macalanda, what arak is, adding she has no idea what they are talking about.

The incident happened last March 11 when government troops from the 71st IB were conducting their peace and development outreach program (PDOP).  Lambo said Sgt. Macalanda forced her to admit she’s an NPA teacher or else face the consequence of being blacklisted.  Other victims also reported that during these PDOPs, soldiers forced them and other residents to admit they are members of the communist NPA.

Meanwhile, Hanimay Suazo of human rights group Karapatan, said they were held by this military unit while they were conducting investigation on the alleged military abuses in the area.

According to Karapatan, since March 18, 6o families already evacuated from the area out of fear of being accused as NPAs.  Other military abuses against residents were manhandling, hamletting and using of public structures such as village halls and health centers.  Soldiers are also staying in civilian houses.

“What these soldiers do is they encamp within civilian communities and control the people.  Three sitios (sub-villages) of Tibagon village is virtually under martial law,” Suazo said.

Suazo said the heavy military presence in Pantukan town serves as RMMI’s armed group.  “We can’t deny the fact that these military abuses are part of the efforts of Russel Mining to push the people away from the mountains so they can freely implement open-pit mining.”

‘We will not give up Pantukan’

“US-Canada’s mining giants guarded by P-Noy’s mining militias have come to displace us economically and physically from our source of living, our home, the only way we know how to live.  But Davids as we are, we will surely win because we stand united.  We can fight their bulldozers and rifles like our Mandaya ancestors fought the colonizers,” FSSMCV’s Gudo said.

He said the avowed compensation that is exclusively offered for a few tunnel owners and ball mill owners by the Russell-St. Augustine “does not stand any chance to make us leave in our panning areas.”