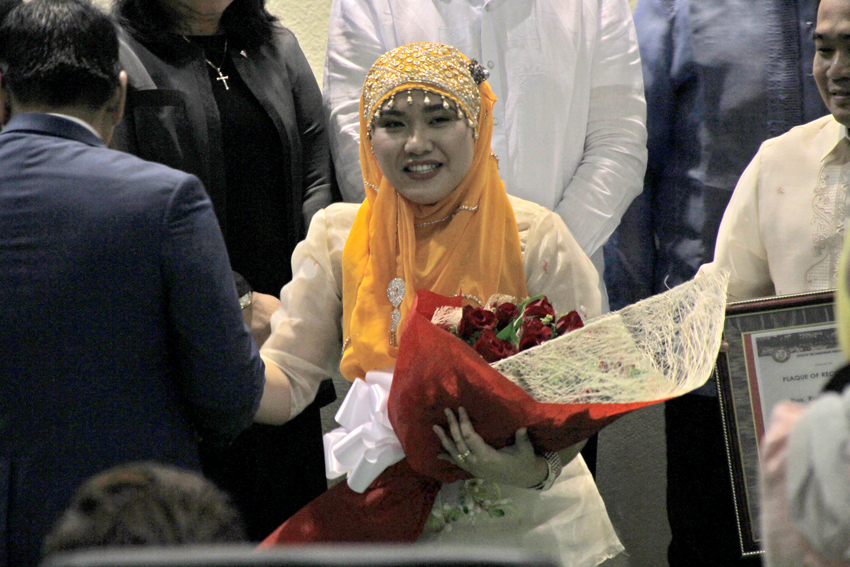 DAVAO CITY, Philippines – Councilor Bai Halila Sudagar formally vacated her post as a councilor during the regular session of the City Council on Tuesday, April 10, after the Certificate of Affirmation (COA) as the Indigenous Peoples Mandatory Representative (IPMR) from the National Commission on Indigenous People expired last March 30.

Sudagar served as the sectoral representative of the indigenous people in the city after she was selected as the city’s Indigenous Peoples Mandatory Representative (IPMR) in 2015.

In her speech, Sudagar cited some resolutions, ordinances, and programs she passed as the chair of the Committee on Cultural Communities and Muslim Affairs.

In November last year, the Council passed an ordinance proposed by Sudagar requiring the mandatory conduct of cultural orientation and consultation of proper use of indigenous people’s traditional attire in parades, gatherings, and other public exhibits or the IP Attire Ordinance.

The Council also passed the Halal Lane Ordinance, a measure proposed by Sudagar in 2016 mandating the segregation of halal food from non-halal food in the market which aimed to protect and respect the religious belief, customs, and traditions of the Muslim community in the city.

She also passed several resolutions such as:

1. The resolution adopting the Ancestral Domain Sustainable Protection Plan of the Ovu-Manuvu Baguio and Marilog Districts

2. The resolution requesting the executive branch of Davao City to implement the Anti-discrimination Ordinance of Davao City by creating a technical working group tasked to develop needed implementing rules and regulations and convene the “Anti-Discrimination Mediation and Conciliation Board” for effective implementation/enforcement

3. The resolution amending the list of identified barangays contained in Resolution No.066-13 Series of 2013, and providing a reservation for barangays that will subsequently qualify, upon confirmation by the National Commission on Indigenous Peoples, to be automatically included in the list herein provided and;

4. The resolution promoting the preservation, recognition, and protection of recognized traditional landmarks, sacred sites, and burial grounds of the indigenous cultural communities of Davao City.

5. The resolution enjoining public offices and entities to use “Kagan” and not “Kalagan” in their files and data records and documents when pertaining to the Kagan Tribe.

As the IPMR of Davao City, Sudagar said, they have conducted an annual IP Summit, a city-wide gathering of all IP leaders and IP organizations from different tribes as a continuous in-depth consultation with the IP Community.

Sudagar attended her last council session on Tuesday and thanked her colleagues, staff and family for their support during her term.

Selection of the next IPMR

Head of the NCIP Davao City , Cristituto Ingay, bared during last Wednesday’s AFP-PNP press conference that the Bagobo Klata tribe will select who will replace Sudagar as determined through the 11 tribe’s alphabetical order.

The NCIP will determine the next IPMR in a selection process on April 12. Ingay also disclosed that there were four people who signified their interest in being the next IPMR of Davao City. (davaotoday.com)